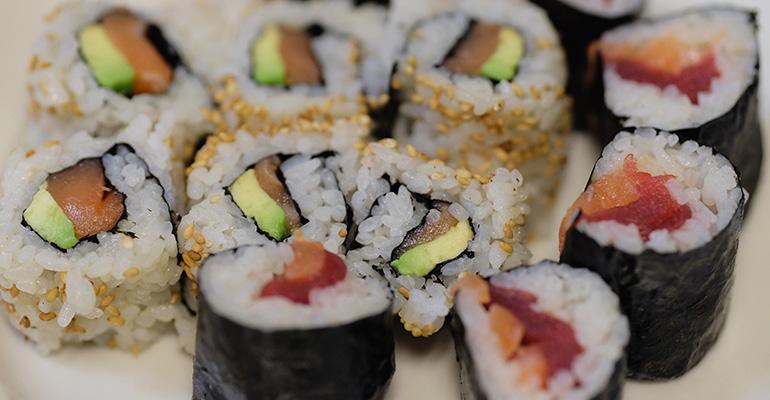 <p>Sushi, poke bowls and other seafood specialties stand to grow in popularity, based on recent consumption trends.</p>
Food & Drink>Food Trends

At first glance, a 6.2 percent year-over-year increase in U.S. per capita seafood consumption might seem like just another ho-hum government statistic. But operators who menu fish and shellfish have been waiting a long time for seafood demand numbers to improve like this. How long? “It’s the biggest jump of its kind in at least 25 years,” AP reports.

Increased consumption is good news if you’re a restaurant operator eager to leverage the latest trends. In seafood, that includes do-the-right-thing menu items that include underutilized (i.e., “trash”) fish, locally sourced seafood and species that are sustainably harvested. Hot sellers such as sushi, seafood charcuterie and poke bowls should benefit, too.

NOAA isn’t the only federal government agency that tracks U.S. seafood consumption. The U.S. Department of Agriculture does, too, and it wants to see consumers eat a lot more fish and shellfish than they already do.

As the National Fisheries Institute points out, “At a time when Americans are told to limit so many foods, seafood is among the handful of foods Americans are encouraged to eat more often.” It’s a dietitian’s dream: a “nutrient-dense source of protein, low in calories and saturated fat, and rich in key vitamins and nutrients including omega-3 fatty acids, EPA and DHA.” NFI adds.

USDA’s most recent dietary guidelines suggest that annual per person consumption should be much higher than it is. The agency’s specific recommendation is that U.S. adults should eat at least eight ounces of seafood per week. That’s 26 pounds per year — 10-plus pounds more than U.S. consumers currently eat. As far as frequency, estimates are that only one in 10 Americans now eat seafood as often as twice a week.

These top 10 species account for 14.18 pounds of all U.S. consumption, so you may not wish to stray too far from these consumer favorites. But there are plenty of creative ways to use them. Even a couple of super-easy-to-prepare items — fish tacos and poke bowls — might be a good place to start. They can accommodate multiple types of seafood, are vibrantly flavored and can usually be sold at fast-casual-level price points. That could prove to be a winning combination for many restaurants, even those that don’t necessarily specialize in seafood.