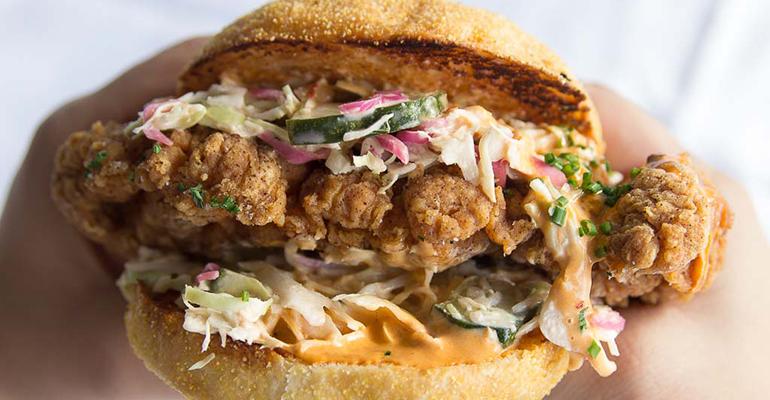 With antibiotic-free becoming the norm, operators look for stand-out birds

If you want to impress customers with chicken these days, you’re going to have to do more than market it with a few clean-sounding phrases.

In order to stand out from others in the now crowded space of food from animals not treated with antibiotics, independent restaurants and small chains are turning to heritage breeds and specialty producers. Non-commercial operations are exploring the possibilities of slow-growing chickens that supporters say are less illness-prone, live better lives and taste better.

“Which is the same chicken used in Michelin star restaurants,” CEO Michael Rosen told NRN earlier this year. “We get it 24 hours from wandering in a pasture to putting it on a plate.

With KFC’s recent announcement that it would phase out chicken treated with human antibiotics by the end of 2018, such practices are now the undisputed norm within the industry. The Yum! Brands Inc. subsidiary’s announcement came shortly after many other industry commitments to source chicken that hasn’t been treated with antibiotics or at least hasn’t been treated with antibiotics used on humans.  Chick-fil-A made the first “never ever” promise for all of its chicken in 2014, followed by Carl’s Jr. and Hardee’s. McDonald’s, too, made a commitment, but for sourcing chicken raised without antibiotics used on humans.

It’s not a coincidence that chains are distancing themselves from animals treated with antibiotics.

A recent report from sustainability advocate Global Opportunity Network found that 86 percent of consumers want antibiotic free food and 60 percent are actually willing to pay for them.  Also, the U.S. Food & Drug Administration has restricted the use of many antibiotics in all livestock beginning in 2017 due to concerns that treating healthy livestock with antibiotics in order to promote growth would also cause antibiotic-resistant pathogens to emerge.

The cost of standout chicken

Andrew Gruel, founder of Slapfish, a fast-casual seafood chain based in Huntington Beach, Calif., is planning on using Jidori at Two Birds, a concept that will soon open in a food hall in Irvine, Calif. Gruel projects the food cost at the new restaurant to be in the 28 percent to 30 percent range rather than a more typical 24 percent to 25 percent. He’s offering grilled or fried breasts of 4.5 ounces to 5 ounces each in sandwiches or salad for $9, or $12 for a double.

“I think it has a little bit of a creamier, gamier flavor,” Gruel said of the chicken. “Kind of like Slapfish, we’re letting the product come first, sacrificing a little on cost of goods.”

“It’s a Chinese family farm and they’ve become sort of a cult bird among the fine dining chefs because of the flavor and quality of the meat.”

The chickens are sold “Buddhist style,” with the head and feet still on, which Smith likes because it allows him to remove the tendons from the thighs with a French hook developed for that purpose.

“You go behind the leg, and if you know where to go you can just twist and pull them all out,” he said, resulting in a more tender and somewhat faster cooking thigh.

He also uses the head, feet and giblets to make a rich sauce for the chicken.

The Cornish cross breed that he gets has a thicker skin and a bit more fat “and just more flavor” than other premium birds he has tried.

It’s not cheap though. With the high transportation costs of the refrigerated truck coming from New York to Las Vegas, Smith pays more than $4 per pound for the chicken, compared to around $2 for other chickens.

“But the concept of a brasserie has to have a great roast chicken,” he said, and with roast chicken available at every grocery store, he had to find something special.

After removing the tendons, Smith separates the skin from the meat using a spatula and then brines the chicken for a quick five hours in a 5 percent salt solution. Then he blanches it twice for 30 seconds, chilling it before the second blanch, which removes some of the fat from the skin and lets it crisp faster.

Then he brushes it in tamari and hangs it to dry in the walk-in for at least 24 hours.

Next he stuffs the cavity with garlic, lemon, shallots and rosemary, brushes it with chicken fat infused with herbes de Provence and roasts it over a mirepoix. Then he rests it upside down in a bowl over the mirepoix, allowing the juices to collect toward the breast to make it juicier.

Then he reheats it in a salamander set at the lowest setting for around 7 minutes to crisp the chicken. He serves it with green beans and jus gras — chicken broth reinforced with vin jaune and chicken fat.

He charges $33 for half a chicken.

“A lot of people come in just for the chicken,” he said. Another Las Vegas concept is going for birds as local as he can find. Chef Roy Ellamar of Harvest at Bellagio recently became the first chef in Las Vegas to serve chicken from Pasturebird, a rotational grazing operation from nearby Riverside County, Calif.

“The guests are interested in the story behind ingredients, and then we want to serve something that’s different than you can get anywhere else,” said Ellamar.

Pasturebird’s chicken coops are rotated over the land to new locations every day, giving the birds different worms, insects, grasses and seeds to eat while scratching at the dirt and replenishing nutrients on the pasture.

“We compared it with another brand that we were using that was also organic, but I felt that the flavor in the dark meat and also the breast just had more depth,” Ellamar said. “It was closer to the flavor of a Guinea hen than conventional chicken.”

Ellamar brines the chicken in a local ale with sugar, salt, mustard seed, black pepper, Worcestershire sauce, soy sauce, onion, garlic, carrot and celery. Then he smokes it over hardwood before letting it dry overnight in the walk-in to let the skin dry so it crisps up nicely when he cooks it on the rotisserie, brushing it with duck fat.

Rupert Blease, chef and co-owner of Lord Stanley in San Francisco, charged $100 for his chicken for two, using birds he got from Emmer & Co. Heritage Chickens. That California company raises dual-purpose breeds that lay consistent eggs and also have good meat, as well as thick bones for making good stock. Their primary breed is the Delaware, a slow-growing bird that is kept in open-sided hoop houses on the same pasture where cattle feed, foraging for seeds, insects and “everything else they can find,” said Emmer CEO and founder Jesse Solomon.

It takes 112 days for them to reach market weight, four weeks longer than BoBo’s chickens and almost three times as long as commodity chickens. And even then they only way 3.5 pounds.

“Visually the chickens themselves are very different,” Blease said, with bigger, longer thighs and smaller breasts. “The flavor was very, very good.”

Recently offered as a two-course special, Blease confited the wings and then fried them and finished them with lemon oil. He crisped the skin from the neck, seasoned it with salt, pepper and lemon zest and served it with an anchovy dip.

He roasted the breast with mushrooms, and confited the thigh and served it with escarole.

Though not currently on the menu, Blease plans to offer it again soon. At $50 per person for two courses, he said “It’s doable, as long as you get people to understand that they’re not eating any old chicken.”

Old chicken is coming into favor, however. For years, the chicken industry worked to grow chicken as big and as quickly as possible, with enormous breasts that would allow processors to chop them into boneless “wings” and other popular items.

But reports of growing incidence of unsightly and unappetizing conditions such as deep pectoral myopathy (also called green muscle disease), white striping and woody breast have led some industry experts to think we might have pushed chickens to their genetic limits.

And it’s not just fine-dining chefs and their suppliers of expensive, pasture-raised chickens. Last summer Perdue Farms Inc., the country’s fourth largest chicken supplier, said it was planning to experiment with birds that grew more slowly and more uniformly.

Since then the company has set up a research farm to explore slow-growing birds, Perdue senior vice president for corporate communications Andrea Staub said in an email.

“Right now, we are still gathering data and learning more as we continue to evaluate slower growth,” she said. “We are currently looking at various ways to achieve slower growth, through breed, diet or some combination. We need to find the appropriate growth rate that balances bird welfare, meat quality and affordability.”

According to Lucky Peach magazine, noncommercial foodservice companies Aramark, Sodexo USA, Delaware North and Centerplate have all expressed commitment to source only slow-growth chicken within the next eight years.

“What I can tell you is we’re in the early stages of developing plans — in partnership with our suppliers, industry associations and animal welfare organizations — to switch to slow-growth birds,” Aramark spokesman David Freireich said in an email.

Another type of older bird is also finding a place in professional chickens: Spent hens.

Paul Fehribach, chef of Big Jones in Chicago, buys hens that are too old to be productive egg layers and stews them to make chicken and dumplings. He boils the chicken, which cost about $5 apiece, with onion and bay leaf for about two hours, “until they’re falling apart.”

He chills them and pulls the meat. Then at service he adds onions, carrot and a seasonal vegetable — ramps at the moment, cabbage later in the year, Brussels sprouts in the winter — to the stock, adds the chicken, brings it to a bowl and then adds doughy dumplings, like wet biscuit dough, which he simmers until the dumplings puff up finishes it with black pepper and sells large bowls of it for $12 at lunch and $14 at dinner.

May 2: This story has been updated to correct typographical errors.