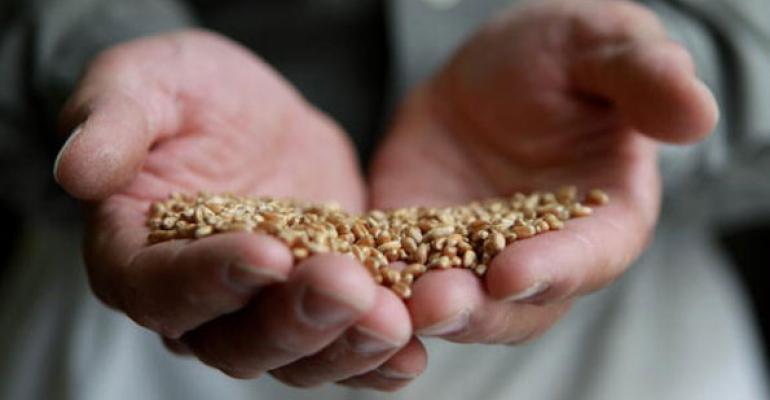 Restaurants finally give flour its due

As gluten sensitivity becomes more widespread, flour has taken a real hit. But the powder derivative of grain is fighting back and might finally be getting the attention it deserves.

Chefs looking for a way to differentiate their wheat-based products—tortillas, pancakes, breadsticks and especially pasta—are increasingly modifying their recipes at the base by specializing their flour.

Different flours can provide a great variety in flavor, chefs say. Innovative Italian restaurants are adding flavor to their flour before hand-making pasta to differentiate their dishes. A few forward-thinking chefs are taking vintage to the extreme, considering buying wheat and milling their own flour in the kitchen.

“There are some great dry pastas out there, but when you start working with different flours, there’s a huge variety in flavor,” says chef Ben Ford, who is preparing to open a Ford’s Filling Station location at LA Live in December.

Ford says pasta purveyors are getting very good at varying flavors but that chefs around the country are “getting interested in sourcing the grain themselves.” He works with a pig farm in California, for example, that also grows and provides barley for Ford’s Filling Stations.

“Scattered throughout the country, there are a few very good flour companies offering native grains and things like that,” he notes. “Chefs are in some way catching up with that movement.”

Ford uses four or five different flours in his kitchen. He’s not milling his own yet, but he’s considering it. It’s not as difficult a process as it sounds, he says, and requires little space in the kitchen. The biggest challenges would be learning what makes one flour different from another—some grains are best milled with the husks still on them, and some have different drying times, for example. Restaurants would need more storage and a good way to rotate ingredients, he says, but in the end it would “make cooking more beautiful.” It would also provide a fresher flour, as flour can go stale or even rancid, he notes.

Executive Chef Luigi Fineo at RivaBella in West Hollywood, CA, isn’t milling his own flour yet, but he’s been flavoring his flour before hand-making pasta and pizza dough for some time. Fineo’s first experimentation with flavored flour was eight years ago when he created a take on classic pistachio-

“I’m fortunate enough to have half of my kitchen dedicated to pasta craft,” Fineo says. “Two people are making pasta all day long. As long as I’m here to oversee them, it goes smoothly.”

Other restaurants experimenting with flavored flour include: SPQR in San Francisco, which uses farro and buckwheat flours to create specialty hand-made pasta such as the Buckwheat Tagliatelle with cider and bacon braised suckling pork and rapini; and Bondir in Cambridge, MA, which uses barley flour in Agnolotti with radish, kohlrabi greens, smoked scamorza, shishito pepper, chanterelle mushrooms and spearmint ricotta.

Does hand-milling flour or flavoring flour come with additional cost?

“Anything you take in your own hands and place an extra effort would be a bit more costly,” Ford notes. “But doing the little things make the difference between good and great.”