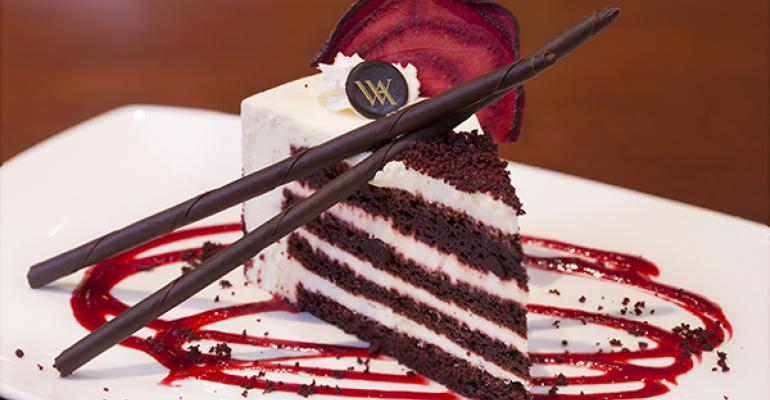 Now that food manufacturers are relying on red velvet cake to inject new life into their product lines, can restaurants be far behind? Red velvet Oreos hit grocery store shelves recently, a move that should help make the traditional cake version’s signature look and flavor—and its companion signature cream cheese frosting—top of mind for many consumers. Can there be a better time for restaurants to add this popular, easily made item to their dessert menus?

It’s become a relative rarity in restaurants. A June 2014 analysis of the dessert menu landscape conducted by restaurant menu data-mining company Food Genius found that some form of cake is the number one dessert item for both chains (64 percent) and independents (66 percent). Yet red velvet cake remains a niche item, appearing on less than five percent of menus in this study.

So is demand for red velvet cake out of whack with supply? Oreo’s parent company, Mondelez International, thinks so. It has identified red velvet cake as an underserved niche.

“We knew there was a lot of love out there for the flavor red velvet … and for Oreo,”  Janda Lukin, senior director for Oreo North America, told USA Today. “So we asked ourselves, why not combine the two?”

Oreos, the world’s best-selling cookie, got on the bandwagon this month by offering a red velvet version of its product that will be available for between six to eight weeks. It’s only the second time the brand has tinkered with the signature look of its product. In this case, instead of two thin chocolate wafers filled with a white creme filling, it features red-tinged cookie wafers and a cream cheese-flavored filling.

Protein bar maker Quest Nutrition sees a market opportunity, too. The company rolled out a recipe for Red Velvet Cake Pops just in time for Valentine’s Day. Both the cake and the frosting use the company’s Vanilla Milkshake Protein Powder to create decadent, yet protein-packed desserts.

Ben and Jerry’s has long provided red velvet cake lovers with a way to get their fix in a slightly different form. It sells plenty of Red Velvet Cake Ice Cream, which it describes as red velvet cake batter ice cream loaded with red velvet cake pieces and a cream cheese frosting swirl.

At least one restaurant operator sees an opportunity here. The crew at Del Frisco’s Grille came up with a Red Velvet Waffle Ice Cream Sandwich for its Valentine’s Day special dessert. Served with a chocolate dipping sauce, it sells for $10. Del Frisco’s says the dish may become a permanent offering if it proves popular on Valentine’s Day weekend.

Some pastry chefs may consider red velvet cake too pedestrian an item for their dessert menu. They’re right, in the sense that almost anyone in the kitchen can turn out an acceptable version without much supervision or training. But that might be all some operators are looking for.

In a recent article headlined “Why DC Restaurants No Longer Care About Desserts,” Washingtonian magazine reported that many of the city’s restaurants have done away with the pastry chef position and outsourced dessert production. Others rely on regular kitchen staff to make them in-house.

“More and more, the task falls to chefs and line cooks who, lacking any background in baking, have contrived to fill their menus with simple, quick-fix solutions. Puddings, custards, panna cotta (an Italian term for what is essentially Jell-O made with cream) don’t require a lot of effort or expense; all can be made in the morning and stashed in the walk-in refrigerator,” the magazine notes.

If your restaurant is in this situation, red velvet cake could be one of the no-frills dessert options that would work for you.