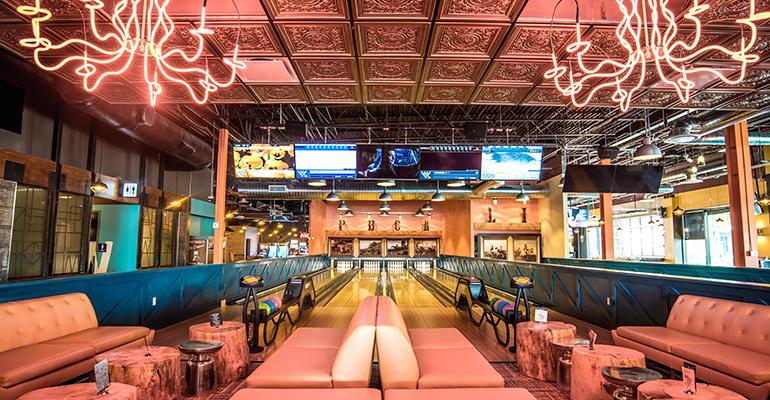 Restaurants are playing with food

When Josh Rossmeisl was first invited to join Kings Dining and Entertainment, then known as Kings Bowl America, he wasn’t really that interested.

“I told them, ‘I don’t work in bowling alleys, I am a restaurant guy,’” he said.

Now the chief operating officer at Kings, Rossmeisl sees the company in a different light. Kings may be a destination for bowling and other games, but it’s also a restaurant with elevated food and beverage offerings that draw traffic on their own.

It’s all part of a growing trend driven by experience-hungry Millennials. They may not be inspired to get off the couch just to dine out, but a game or activity that makes it more of a social event might provide the incentive they need.

The trend has played host to a growing niche of eat-ertainment venues, such as New York-based Spin, which operates eight locations offering ping pong; Dallas-based Topgolf, a fast-growing chain operating about three dozen locations offering high-tech, golf-related games; and several others centered around video games and other activities, including immersive theater, like The Murder Mystery Theater Co., based in Grand Rapids, Mich.

The high-quality food and range of activities available at these concepts are fulfilling the needs of multiple types of dining occasions, from date nights to informal gatherings to corporate outings, operators said.

“People are looking to be entertained,” said Rossmeisl. “When people used to go out on a Friday or Saturday night and enjoy each others’ company in a restaurant, that would be entertainment. It was a great experience.”

Now, he said, people are looking for something more. The emphasis on high-quality food at Wellesley, Mass.-based Kings, which operates 11 locations around the country offering bowling and a host of other table and interactive games, is what led the company to recently change the name of its restaurants to Kings Dining and Entertainment. Rossmeisl also sees the name change as a potential recruiting tool for the type of personnel the concept is seeking to attract.

“We're a full scratch kitchen,” he said. “It's not a place where we back in the frozen-food truck every Monday, and have food be an afterthought.”

The concept wins rave reviews from its customers for its chicken wings, its on-trend selection of flavorful burgers, and other fare, which include appetizers such as kung pao fried cauliflower, a variety of pizzas such as one topped with fig jam and prosciutto, and entrées such as ginger-soy-glazed salmon.

The average check for two totals $45 for lunch and $60 for dinner.

The strong food program at the concept is reflected by the chain’s booming takeout business, which has tripled in the last two years is now offered in several of the chain’s resataurants, said Rossmeisl. Food accounts for about 35 percent of revenues across all locations, he said, and beverages another 20 to 25 percent, with rest coming from games.

Likewise, Robert Thompson, founder and CEO of Denver-based Punch Bowl Social, said food is foremost at his concept, which has aggressive expansion plans.

His chain of about a dozen experiential restaurants rely heavily on offering a high-quality menu of scratch-made dishes and craft cocktails to accompany the design-forward warren of bowling lanes, bocce, karaoke, video games and other activities that Punch Bowl provides for amusement.

“It’s not just about the gaming and the entertainment,” he said. “For us, there’s a significant emphasis on the scratch-cooking element, with our celebrity chef Hugh Acheson, who we brought in as a partner, and the scratch cooking and craft cocktail element that we brought into the experience.”

Having Acheson as the face of the culinary program at Punch Bowl Social augments its credibility as a destination for foodies and helps gain the attention of the local food writers wherever the concept opens, said Thompson.

In addition, Punch Bowl’s layout is carefully designed to funnel customers past the dining area, the open kitchen and the dessert case on their way back to the bar and gaming areas. Gaming actually only accounts for about 11 percent of the revenues at Punch Bowl Social, he said.

“It’s not because the games aren’t busy; it’s just because we are able to draw so much food and beverage traffic,” said Thompson.

Thompson said he doesn’t track the average guest check as a metric because of the variety of activities that customers engage in at Punch Bowl. Menu prices range from about $9 and up for sandwiches to about $13 to $20 for entrées, with shared plates and platters also available for groups.

The focus on beverages in many of these concepts is key. Some focus on local craft beers, and most seem to invest in offering a unique menu of signature craft cocktails as well.

Punch Bowl Social, for example, offers a variety of sophisticated alcoholic punch drinks in single servings or in four- or eight-serving portions for groups, and its drink menu screams “fun,” with sections such as “old man cans” of nostalgic beer brands.

An alternative to social media

This new wave of experiential concepts is seen as bringing people together in ways that social media cannot, operators said.

“The irony is that, connected as we all are in some respects thanks to our iPhones and technology, in a lot of respects people are as disconnected as ever,” said Dale Schwartz, founder and CEO of Chicago-based Pinstripes, which offers bowling and bocce in a food-centric environment. “Our vision from Day One was in some respects to go back to the future and create a really special environment where people can truly connect — good old-fashioned human-to-human connection.” While Schwartz said Pinstripes counts on corporate and other events for a significant portion of its business, the quality of the food offering helps pull in local traffic from regulars as well.

“We have some customers that live quite close to us that come three, four, five times a week,” he said. “The food is that good. The environment is that comfortable.

“We're a restaurant/banquet facility with bowling and bocce,” said Schwartz. “We're not a bowling alley with food. That’s an important distinction.”

Like other experiential restaurant concepts, Ferris Wheelers, a new barbecue-and-games restaurant in Dallas, has found itself to be in demand for corporate events, said Brandon Hays, co-owner.

Hays said the idea behind Ferris Wheelers was to create a true “taste of Texas” experience in the area, which is near the World Trade Center of Dallas frequented by of out-of-town visitors. While the biggest attraction is likely the 50-foot tall Ferris wheel that gives the concept its name, the owners are taking the food quite seriously, tapping acclaimed barbecue pitmaster Doug Pickering to create the menu.

In addition to the Ferris wheel, which will be used to raise money for local charities, the venue features an outdoor area with a variety of activities, such as oversized Jenga and beanbag-toss game cornhole, as well as live music. “It's become important to titillate the senses and create kind of a sensory overload, and that's really what we wanted to go for in this venue,” said Hays, whose This and That Concepts also operates other Dallas restaurants that feature entertainment elements, such as Parlay Sports Club and The Whippersnapper.

Hays said Ferris Wheelers was designed with a range of customer dining and activity occasions in mind.

“We wanted to make sure it was versatile, so that you could come on a live music night and relax and have a few beers, or you can be in and out for lunch in 20 or 25 minutes,” he said. “We paid attention to every one of those aspects, and we execute on all those things on a very high level.”

Thompson of Punch Bowl Social noted that the experiential restaurant niche is insulated from the growth of ecommerce.

“You can deliver food, but you can’t have an experiential dining occasion in your home,” he said. “You have to get up, put your clothes on, come out to Punch Bowl Social and activate and socialize with the rest of the world.

“Maybe Amazon will figure out how to deliver a bowling alley in one of their delivery trucks, but until they do, we feel fairly insulated from Amazon.”