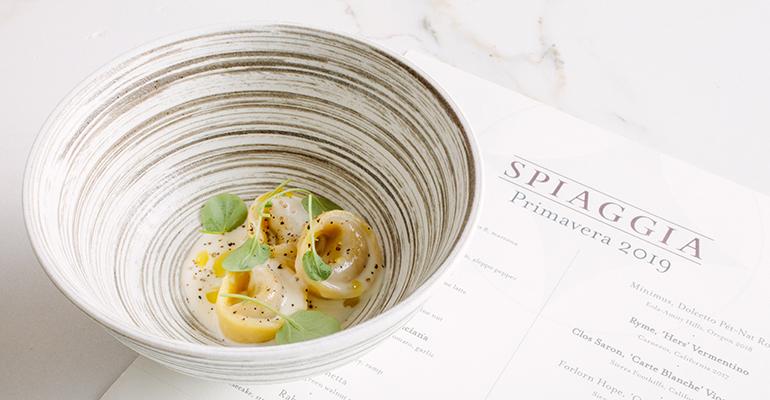 Zoodles or not, there is no substitute for pasta’s higher power. Here are four ways to play with fire, color, flavor and technique for a pasta pilgrimage.

Ember opened this spring with more of a POW! than a soft glow, with tableside spectacles of live fire galore. Brad Kilgore’s menu here includes a section for “items not traditionally cooked over fire.” Cornbread custard, champagne terrine and this pasta showstopper, fire roasted lasagna, are all there, changing perceptions. Kilgore said this dish is “fun for me … it’s a true collaboration between me and Chef de Cuisine Nick Graves. We both love working with pasta.” Each savory slab of pasta — with grilled maitake mushroom Bolognese and gruyère fondue —achieves lasagna’s best crispy corner pieces, since it’s fire-kissed on all sides.

The Smith, which debuted in New York City in 2007 and just opened its first Chicago restaurant, has a knack for cheesy comfort, as in the signature blue cheese fondue and potato chips shareable cult favorite. There’s a mac ‘n cheese in a skillet, too, as far as pasta perfection, but it’s this mean, green pappardelle that’s turning heads this season. Pappardelle gets its name from the verb “to gobble up,” and that looks easily done, as this version is paired with overnight tomatoes, peas, country ham, asparagus, parmesan and crunchy lemon breadcrumbs.

Marie Petulla, owner of Union, hired Christopher Keyser because his cooking philosophy rests on the core ideologies of Italian cuisine, a cornerstone of which is simplicity. The housemade pasta speaks for itself in dishes like this torchetti, with a succulent sauce of Calabrese pork ragu, housemade ricotta, fried rosemary and pepperoncini.

Roman amatriciana sauce is a whole different animal than its Sunday-red sauce Sicilian cousin. At Spiaggia, Joe Flamm is introducing this sauce with origins in the streets of Rome to the most famous street in Chicago, Michigan Ave. What makes amatriciana? Pork cheek. Flamm makes the sauce with guanciale, hay-aged pecorino, tomato and garlic. He departs from traditional bucatini with handmade tortellini arranged in a fresh spring nest of pasta nirvana.