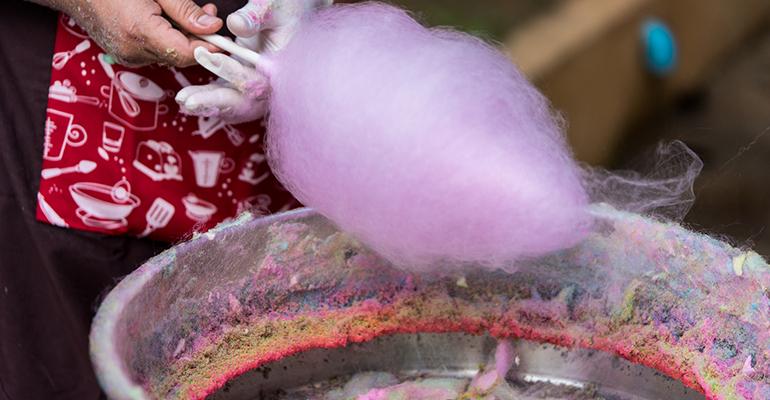 This last, of course, is a dead giveaway that it’s state-fair season, when deep-fried foods become something of a culinary blood sport, and fryer jockeys vie to one-up each other.

No state has a lock on greasy grub. There have been deep-fried Oreos at the Indiana State Fair and deep-fried, wine-glazed meatloaf in Minnesota. It is perhaps appropriate, however, that no foodservice venue is more awash in oil than State Fair of Texas. Vendor Abel Gonzales has won quite a following with original creations like fried butter, fried chocolate and his famous fried Coke, which earned a medal from the judges and spawned legions of imitators.

Indeed, in years past, fair-goers could slip-slide their way through a Texas-sized meal with a first course of fried chef salad, an entrée of fried jambalaya, or perhaps fried pizza, and a dessert of fried peaches and cream with a chaser of fried bubble gum. This fatty feast might be washed down with fried lemonade or perhaps a fried beer, Cosmopolitan or Margarita -- assuming you have ID showing that you’re 21 years of age.

What may be getting lost in all the hype and hubbub is the basic consumer appeal of fun, tasty, hand-held carnival foods and the extent to which they’ve been embraced by restaurateurs. Krispy Kreme has featured Cotton Candy Doughnuts dipped in pale blue cotton-candy sugar, and Chicago’s chic RPM Steak dishes up big bowls of cotton candy for special events. A different carny staple has gone legit at The Cheesecake Factory, where Fried Mac & Cheese is coated in crispy crumbs and served over creamy marinara sauce.

Funnel cakes have moved from midway to mainstream, too, and appeared as promotional offerings at IHOP and Burger King. A couple of summers ago, Cold Stone Creamery offered an innovative No Fair Funnel Cake Sundae, which promised “deep fried deliciousness without losing money to that guy who runs the ring toss.” This summer, Long John Silver’s weighed in with deep-fried Twinkies at select locations through the month of July.

Corn dogs, another carnival crossover, have also been undergoing a renaissance of late, as chefs have taken them uptown. Cases in point: the rabbit corn dog on the Hearty Boys’ catering menu in Chicago that is served with Red Rye Ale syrup, and the shrimp corn dog at Oakleys Bistro in Indianapolis that is accompanied by bistro honey mustard. And the longanisa corn dog at Guerrilla Street Food in St. Louis starts with the popular Filipino sausage, then finishes it with pickled green papaya salad.

One of the attractions of food trucks may be that many offer fair fare all year long. My Sweet Lil’ Cakes in Seattle serves both sweet and savory hot cakes on a stick. Diners can have chicken and waffles with maple butter, or red velvet buttermilk with dark cherries and cream cheese drizzle right in hand.

You might assume that the Texas Veggie Fair, which was founded in 2010, overlaps with the State Fair of Texas and celebrates “plant based lifestyle options of every kind,” would provide a counterbalance to its larger, meatier counterpart. But this is Texas, after all. Veggie-based culinary competitions at the event have showcased fried piña coladas, fried vegan Reubens and fried banana pie.