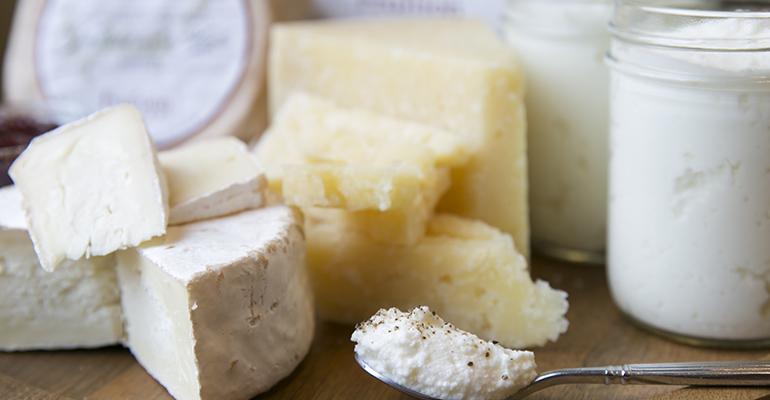 Chef Alex Seidel sharpens his focus on the craft of cheesemaking

Raising his own sheep for milk to produce artisan cheese was an invaluable learning experience for Colorado chef/restaurateur Alex Seidel, but as a business, dairy sheep farming is a challenge perhaps best left to the experts, he said.

Seidel, who began raising sheep on his 10-acre Fruition Farms in Larkspur, Colo., in 2010, last year sold his entire herd of more than 100 dairy sheep so that he could devote more resources into the cheesemaking process itself.

“We wanted to understand the whole process from start to finish,” said Seidel of his foray into sheep farming. “We believed in the whole farmstead idea — milking our own milk, making our own cheese — and over the last seven years, we found that our passion really was in cheesemaking.”

He also realized, he said, that a 10-acre farm was not enough space to produce the amount of milk he needed to meet the demand for his cheeses. The products have won several awards and received critical acclaim that almost rivals the reputation of his two Denver eateries, Fruition Restaurant and Mercantile. In the last full year in which he was raising sheep, Seidel said the herd only produced 45,000 pounds of milk, which generated $80,000 in cheese sales. Of that revenue, Seidel spent $40,000 on alfalfa alone to feed the sheep.

“I had to subsidize it,” he said. “For the last six or seven years, we have been running a little bit of ‘hobby’ operation.”

Instead of raising his own sheep for milk, Seidel now buys sheep’s milk from Irish Cream Sheep Dairy, the 800-head farm in Nebraska, where he and one of his chefs had spent several weekends learning how to raise and milk dairy sheep before they jumped into the business themselves on a much smaller scale.

“They [the Irish Cream Sheep Dairy] have a better-tasting milk, and they can produce it cheaper than we can make it for ourselves,” said Seidel. “It became a no-brainer for our model.”

That model is to strive to make the highest-quality cheese possible, so that it can be worthy of the dishes at his restaurant Fruition — widely considered one of the top restaurants in Colorado and lauded for its approachable, seasonal fare — and Mercantile, which blends foodservice with a retail selection of seasonal, artisanal products from Seidel’s own farm and from around the country. Seidel — who is originally from Wisconsin but had little experience in cheesemaking — was inspired to get into the sheep’s milk cheese business after attending a symposium in upstate New York.

“We had made some simple cheeses, like ricotta and mozzarella, and played with some curds in the restaurant,” he said. “Nothing too intense.”

He said he was drawn to the characteristics of sheep’s milk — its high fat and protein content lend themselves to making some exceptional cheeses.

Locally produced artisanal sheep’s milk cheese did not exist in Colorado when Seidel launched the Fruition Farms Creamery as a part of the farm, where Seidel and his team also have also raised heritage breed hogs, honey bees, chickens and ducks, along with growing various fruits and vegetables.

The farm supplies Seidel’s restaurants with fresh, local, seasonal ingredients, and sheep’s milk cheese has become an important component of that mix. Seidel and his crew, including his head cheesemaker, Jimmy Warren, are now producing five sheep’s milk cheeses:

“All of them are incorporated on my menu,” he said. “We use them from everything from ice creams and sorbets to ricotta beignets, to dumplings made out of out of the SheepSkyr. We have done a lot of different things out of the sheep’s milk cheeses. It’s very versatile, and very fun.”

Seidel also sells his cheeses through a few distributors and to some specialty cheese shops. He described a symbiotic relationship among Fruition Restaurant, Mercantile and the farm and creamery.

Cooks from the restaurants spend time working at the farm, and the knowledge they have gleaned about producing the ingredients that are on the restaurants’ menus have imbued his staff with a more holistic perspective on the cuisine.

“I think it gives our chefs a different appreciation for food, and I think it shows on the plate,” said Seidel.

The various elements of Seidel’s culinary empire work together in other ways as well.

All of the scraps from the restaurants — leftover vegetables and bread, for example — are sent to the farm to feed the pigs. The pigs also eat the whey from the cheese, which in turn produces high-quality pork, he said.