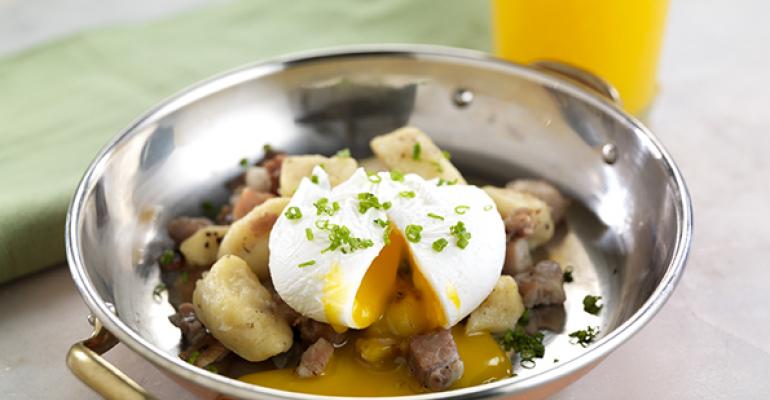 You think you’ve got marketing challenges? Think what it’s been like for Coast Packing, a top supplier of lard and beef tallow, two products dietitians scorn as cholesterol producers of the first order. Coast’s new survey finds that these animal fats are making a comeback, particularly among Millennials. No wonder a handful of restaurants have already figured out how to profit from this emerging microtrend.

Coast hired market research firm Ipsos to quiz 1,000 adults regarding their attitudes about, and consumption of, animal fats. The top-line results: Younger Americans are more receptive to animal fats in their diets than their elders, and they eat accordingly.

It’s not a surprising result. Millennials have come of age in an era when bacon, a gateway experience for animal fat lovers, has become ubiquitous on restaurant menus. It’s no wonder some of these bacon fans think that instead of being gross and greasy, lard and beef tallow are really more unctuous and upscale.

Which may be why the Ipsos survey found that Millennials are twice as open (15 percent) to eating animal fats as Gen Xers (seven percent) and three times as willing as boomers (ages 55 and up, five percent).

The consumption story is similar Thirteen percent of Millennials say their rate of eating food items that contain or are prepared in animal fats has increased, as compared to five percent for those ages 35-54 and two percent of those 55 and older.

“Trans fats are out, and minimally processed animal fats—in the form of lard, derived from pork, and beef tallow—are decidedly making a comeback,” says Coast Packing c.e.o. Eric Gustafson. “Millennials are concluding that animal fats have been demonized for too long. The reality is that animal fats, in moderation, are not as problematic as they once were thought to be, and the replacements for them are actually worse than originally thought. And in today’s foodie culture, taste is increasingly on par with health concerns.”

It’s tough to beat the flavor notes animal fats lend to certain items. Many French fry aficionados regard beef tallow—rendered beef fat—as the premier deep-frying medium. They rue the day long-time user McDonald’s switched to vegetable oil out of concern for tallow’s saturated fat content. The fries were nominally healthier, but the product’s flavor paid a price. The remedy? Now the QSR giant says that “When our suppliers partially fry our cut potatoes, they use an oil blend that contains beef flavoring.”

Lard produces standout tastes and textures, too. Many bakers swear by lard for pie dough and many other baking applications. Fans of doughnuts argue that frying them in lard produces a more flavorful,  lighter-textured product. Some of the most outstanding restaurants riding the current Southern fried chicken craze fry their birds in lard for reasons of both taste and authenticity.

Lard even works as a standalone menu item. For example, salumi product lardo—cured pig’s back fat—has served celebrity chef Mario Batali well. He sells it at Eataly and serves a whipped house-made version with the bread course at his Carnevino steakhouse in Las Vegas and at three-star Del Posto in New York City. In Portland, chef Rick Gencarelli opened his Lardo food cart in 2010 and, two years later, has a pair of brick-and-mortar restaurant of the same name. Their motto: “bringing fatback 7 days a week.”

So there’s enough of a market that these operators can prosper menuing animal-fat forward items. But it could turn out to be even bigger if the results of a new study hold true. Scientists at Purdue University have discovered a sixth primary taste that people can sense. It’s fat, now on equal footing with sweet, sour, salty, bitter and umami.

The researchers say fat does not taste good on its own, but adds to a food’s overall appeal when used in very low concentrations. Thus the small amount of beef tallow consumed when eating French fries or the hints of lard flavor given off by pie crust elevate the overall flavor profile.

For Millennial diners, these tastes are worth seeking out. That in part explains the popularity of restaurants that offer nose-to-tail cooking or produce their own charcuterie in-house.

Coast Packing is hoping this customer base continues to expand.

“While we’re heartened to see the generational shift, we recognize that traditional ways of thinking and eating don’t change overnight,” Gustafson says. “It’s important to recognize first and foremost the natural makeup of both lard and tallow.  Neither contains the artificial trans fats you find in hydrogenated shortenings.  We believe strongly that these products are best when minimally processed, which is consistent with the whole movement in food and cooking right now.”