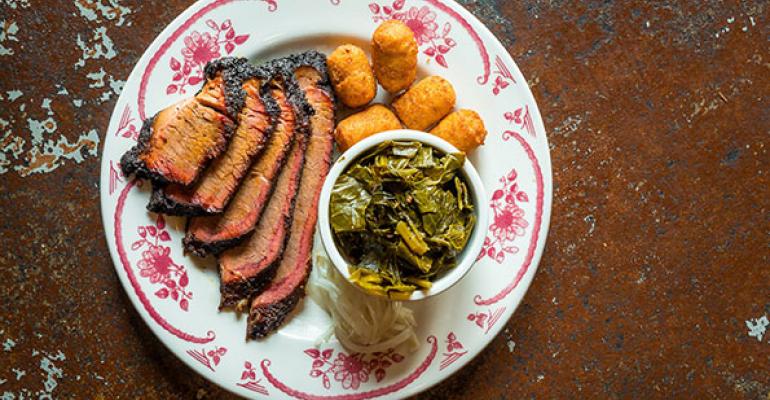 Each year, when we’re evaluating culinary trends for the next 12 months, we think there’s a possibility that barbecue might fall out of fashion. What the heck are we thinking? By the time spring rolls around, we’re just as eager to fire up the grill and smoker as we were last year. Nothing beats the process and the results of low-and-slow cooked meat.

The kitchen guys tend to agree with us. The National Restaurant Association’s “What’s Hot Culinary Forecast” surveyed 1,300 chefs across the country last December and barbecue topped their list of perennial favorites.

So how are you going to make your barbecue stand out this year? Perhaps you can pick up a few tricks from the following trendsetters who are flipping the barbecue game on its side.

Midwood Smokehouse is a Charlotte, NC-based restaurant known for its down-home, authentic Texas-style barbecue. Wait, what?

While North Carolina may be notorious for its vinegar-based barbecue, Midwood Smokehouse founder Frank Scibelli wants to make sure he’s doing it the right way. So he recently traveled to the heart of Texas to hone his craft, working with James Beard Award-winning chef Robb Walsh to nail the taste of Texas. Now Scibelli is back at home base in North Carolina, seeking recipe advice from barbecue Pitmaster Ed Mitchell.

Depending on how you look at it, fast-casual barbecue could be an oxymoron. Even more of a head-scratcher is “healthy barbecue.” But Southern Concepts plan to serve both as it extends Justin Timberlake’s Southern Hospitality brand into new fast casual units.

The company plans to open up to five new fast casual BBQ units in the Denver and Colorado Springs markets by summer 2016.

The company says it can successfully bring authentic smoked barbeque to the masses in a way that is convenient, affordable and high quality. Southern Hospitality will also reach out to health-conscious consumers. The concept will “defy typical wheat, starch, and carbohydrate-dense options to offer foods that fit into a wide range of diets—from Paleo and Atkins to gluten-free,” the company says.

Teaming whiskey and barbecued meat is nothing hardly novel. But blending the two flavors into a culinary dish takes it to the next level.

Bourbon tends to be associated with barbecue mostly in the Midwest and the South, but that is changing. According to Datassential MenuTrends research cited in Nation’s Restaurant News, bourbon barbecue appears on 32 percent more restaurant menus than it did four years ago.

Rye was the whiskey of choice for an innovative menu at Kansas City’s Gram & Dun, which partnered with Templeton Rye to offer a super-unique prix fixe dinner. The dinner features fresh cuts and cured portions from a whole, Templeton Rye mash-fed pig, one of just 25 such pigs. Iowa-based Templeton Rye dubbed it the Heritage Pork Project, which started when the company arranged for 25 Duroc pigs to be raised on a farm near the distillery and fed a diet that included spent grain mash from the production of the rye whiskey.

If you told us more barbecue was consumed inside and outside Lambeau Field than most other places in the world, we wouldn’t be surprised. According to Food Management magazine, executive chef Heath Barbato and his team at the home of the Green Bay Packers serves one ton—yes, 2,000 pounds—of brisket every game day.

The brisket, along with pulled pork, smoked chicken and turkey, are used to top items like brats, hot dogs and nachos. One such item is the Legend Dog, a kosher hot dog topped with either shaved brisket or shaved pulled pork, topped with housemade barbecue sauce and crispy onions.