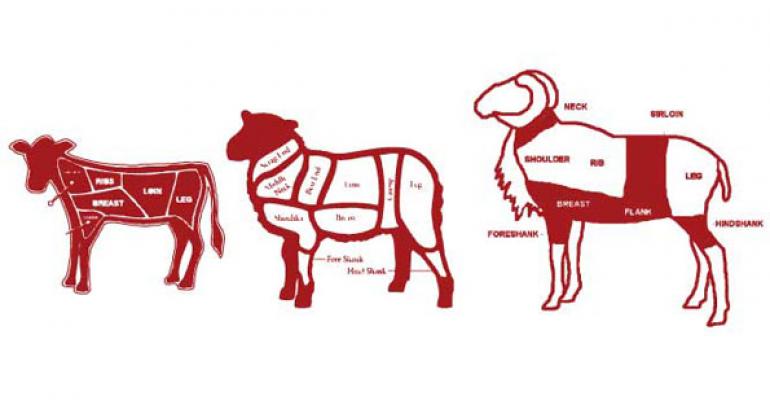 Goats get a bad rap. The farm animals are accused of eating tin cans and any other kind of garbage, when in fact they’re pretty picky eaters. For cooks, their meat is often perceived as tough and requiring extended time to cook. Snobby Americans typically turn up their noses when they learn goat is a delicacy in many other culinary cultures.

But not for long. With skyrocketing prices of beef in the U.S., many full-service restaurateurs are more heavily promoting their lamb burgers and yes, even goat meat. No longer are ethnic restaurants the only ones serving goat – the meat has gone mainstream.

Scott Conant, the James Beard “Best New Restaurant” recipient and founder of savory Italian concept Scarpetta, is one of the most prolific proponents of goat meat. Baby goat, or kid, appears often on his menus, typically moist roasted. A few years back, he shared this recipe with Delish.

Now beef prices have other high-end chefs taking notice. Kevin Good, senior analyst at CattleFax, told Nation’s Restaurant News that rising beef prices are due to cattle herds that were decimated after multiple years of drought that drove up feed prices. Good said cattle farmers are rebuilding their herds, but that it takes up to three years from gestation for cattle to reach market weight, meaning prices of many cuts aren’t likely to fall significantly until 2016 or 2017.

The Massachusetts Cheese Guild is also on board, hyping the “undeniable rise in interest in goats over the past few years."

“Spring kids are prized for restaurant or backyard roasting, but they’re also gaining favor for landscape management, and as companions for other animals,” the company says. The Guild represents several Massachusetts farmers taking advance orders for kids.

If you’ve embraced the goat cheese movement, perhaps goat meat is your next step.

According to the New York Times, goat is the most widely consumed meat in the world, a staple of Mexican, Indian, Greek and southern Italian cuisines. The meat is lower in fat than chicken but higher in protein than beef, the newspaper says.

If you just can’t get past the goat’s preceding reputation, you can step it up a notch with the closely related lamb.

We’re seeing lamb burgers on a lot of menus these days. Bonefish Grill, in fact, recently introduced a new bar menu that features several sharing plates, including “On the Bone Lamb Lollipop Chops” that are lightly caramelized and grilled.

On top of rising beef prices, there may be another factor for the increased popularity of goat meat today. According to Reuters, the number of U.S. residents born in the Middle East jumped to 1.6 million in 2012, up 47 percent from a decade earlier, according to Pew Research Center. Population increases were also seen from other communities with traditional goat cuisine: South America (up 42.3 percent), Central America (56.3 percent) and the Caribbean (31.4 percent).

Take a look at the price of goat meat versus hamburger. You might be tempted to use goat meat as a filler, mixing it in with your beef for burgers. If you can convince your adventurous diners to get over there ill-conceived perceptions, you could save a serious chunk of change.