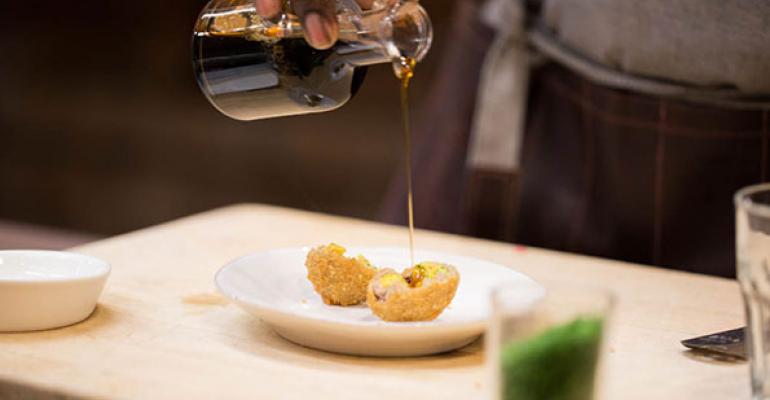 Dim sum-style foodservice dates back more than 400 years....so clearly it was about time for a refresh. Today, chefs across the U.S. are revisiting the Cantonese tradition of bite-size servings on small plates. But they’re adding a few twists, such as using nontraditional items and serving them dim sum-style from carts wheeled through the dining room.

In an interesting reversal of trendsetting, eastern regions of the world are now looking to American chefs as inspiration for dim sum and are using western ingredients and plating western dishes in small-plate form. Globally, dim sum style is being pushed forward.

“Dim sum is the ‘it’ thing going on right now in restaurants,” says Rodelio Aglibot, chef and co-owner at Chicago’s Earth + Ocean and Yum Cha. Aglibot will open an offshoot of Earth + Ocean called E+O Kitchen in Cincinnati later this year.

Yum cha, which refers to the Chinese tradition of tea drinking, serves as the basis for dim sum. In earlier days in Asia, travelers who stopped for yum cha at teahouses were often hungry, so owners began adding small snacks to complement the tea.

Today, sharing small plates has moved from a quiet and humble tradition to a loud and boisterous reason to celebrate and share good food.

“We just feel like this is the way people eat now. That kind of casual atmosphere really works for that type of dining,” says Michael Scelfo, chef/ owner at Alden & Harlow in Boston.

Serving food dim sum style has benefits in the back of the house. As the orders come in, chefs can prepare food at their own pace rather than sync up with any number of chefs working simultaneously on the same dishes. No more timing courses; instead, dishes are prepared in small batches and served as they are ready. In the front of house, dim sum-style service allows the waitstaff to engage with diners in a different way, offering and suggesting courses based on what the diners are choosing from the cart.

At Yum Cha in Chicago, Aglibot offers dim sum for lunch and dinner, with cart service on the weekends.

Dim sum is particularly suited to diners’ desire for adventure. They can see the food, and pick and choose small portions to taste and share. This gives diners a sense of control—they can try new dishes and flavors with little risk.

There’s little risk on the restaurant side, too. If you haven’t yet experimented with small, shareable plates, now might be the right time.

Other examples of restaurants that have adopted a dim sum service style include:

• State Bird Provisions in San Francisco rolls out dozens of dishes a night on dim sum-style carts.
• Má Pêche in NYC allows diners to order a la carte offerings or choose from a tableside cart.
• Servers at Church Key in L.A. wheel both food and cocktails to the table on carts.
• Gunshow in Atlanta is fueled by modern Southern dim sum dishes.