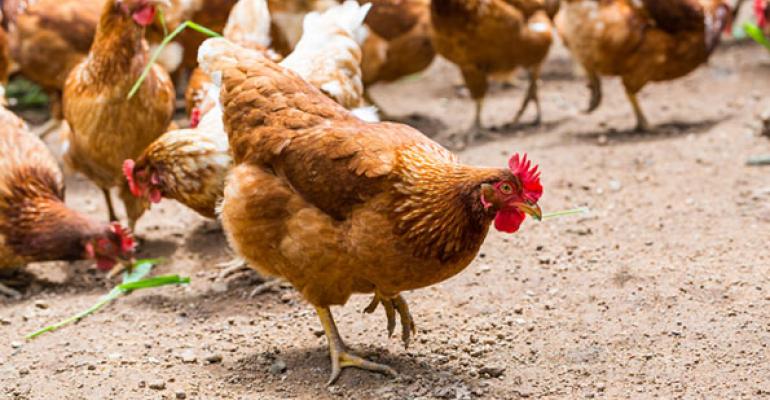 <p>Sodexo announced it will source all of its eggs from cage-free systems by the end of 2020.</p>
Food & Drink>Food Trends

In recent years, chefs have learned that partnering one-on-one with local farmers not only leads to fresher ingredients but also conveys a message to diners that the restaurant, and ultimately the meal, is a part of the community.

A side benefit to more selective meat and poultry purchasing is that chefs and diners can feel more comfortable about how the animals were raised. In today’s cell phone era where inhumane animal treatment is easily recorded and brought to light, more and more consumers are expressing concern over what they’re eating.

From cage-free eggs to grass-fed beef to antibiotic-free meat and poultry, a growing number of chefs and consumers are demanding responsibility from protein suppliers.

McDonald’s earlier this month followed in the footsteps of Chick-fil-A and Chipotle in announcing a commitment to stop serving chicken raised with "human" antibiotics. Both animal and human antibiotics have been used in farm animals for decades as they are known to cause rapid growth in hogs and chickens. So many farmers will indiscriminately add low-dose antibiotics to their animals’ food and water, causing them to grow faster on a smaller amount of feed.

According to Eater, agricultural producers purchase more than 30 million pounds of antibiotics annually, accounting for an estimated 80 percent of all antibiotics sold in the United States. But the Centers for Disease Control and the Food and Drug Administration have long cautioned that the use of antibiotics in our foods constitutes a public health risk. Speaking to Congress in 2013, the CDC, FDA and Department of Agriculture all testified to a link between the non-therapeutic use of antibiotics in animal agriculture and antibiotic-resistant bacterial infections in humans.

The move by McDonald's is expected to have a dramatic effect on the U.S. poultry industry.

Are you more diligent today about sourcing product from humane suppliers? If so, don't be afraid to toot your own horn. McDonald’s, Chick-fil-A and others surely are, using their decisions in widespread marketing campaigns. In fact, Chick-fil-A posted the following Tweet shortly after McDonald’s announced its decision:

We know you care about what's in your food - and there's a lot of conversation around the topic of antibiotics. https://t.co/3NYkmt9pSe

The link above details some of Chick-fil-A’s program specifications:

“We don’t allow antibiotics to be added to the feed, water or any commercial vaccines used by our suppliers. We also don’t allow ionophores (which are commonly used to prevent intestinal illnesses in animals).

“In partnership with our suppliers, we’re working to establish a stable, sustainable, supply chain that can deliver on our promise of no antibiotics ever. This means every customer, at every restaurant across the country will be served chicken without antibiotics everyday.”

You could also get the word out to consumers by working with America for Animals, which has launched a new consumer-friendly app called The Humane Eating Project. The app guides people to restaurants that offer humanely raised and vegan/vegetarian options.

When chickens are involved, so are their eggs. Long the subject of animal welfare groups, agricultural suppliers are slowly but surely freeing their egg-laying chickens from their cages as more consumers demand cage-free eggs.

Sodexo, a massive foodservice and facilities management corporation, announced in February the next step in a phased approach to improving its sourcing of poultry, beef and veal and fostering improved animal well-being through its supply chain. Specifically, the company announced it will eliminate the use of veal crates from its supply chain by 2017 and source all of its eggs from cage-free systems by the end of 2020.