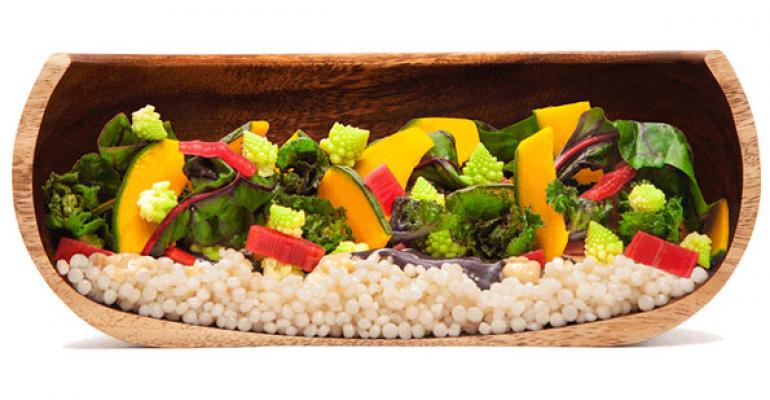 "Hey, I love meat. But every day I eat less and less of it. I really love vegetables. They are so much more interesting and have so many more possibilities. Different ones every season. They don’t deserve to be on the side of anything, they should be center stage.”

You might expect those words to come from your newly transformed vegetarian or vegan friend. Not so. Those are the words used by José Andrés—yes, that José Andrés—to describe his newest fast-casual, veggie-centric restaurant, Beefsteak.

The much-anticipated arrival of Beefsteak in March served as a beacon for the vegetable movement, ensuring consumers and produce-friendly chefs that vegetables can indeed replace meat at the heart of the plate.

It’s a practice common among vegetarians and vegans, but now that more Americans are concerned with fresh ingredients and healthy meals, serving vegetables as entrées has gone mainstream.

Andrés sees it as a personal responsibility.

“There is an important opportunity for us to have more influence on how our country, and our planet, feeds its people,” he says in this video announcing the launch of Beefsteak. “In ways that makes them happy, gives them good choices and fits their way of life.”

The Beefsteak menu includes $7.99 create-your-own or predesigned combination bowls. The guest first chooses heartier vegetables—squash, potatoes, asparagus, mushrooms, Brussels sprouts, broccoli, etc.—that are lightly boiled to order. Next, the bowl gets a ladle of sauce, raw veggies and a topping, such as crushed almonds or drizzles of lemon and olive oil. Lighter proteins such as chicken and salmon are offered, but no beef.

Andrés is the latest prominent chef to embrace a vegetable-centric philosophy. Other chefs and restaurants have grown more confident displaying their affection for plant-based meals.

Core Foods, an Oakland-based company that has been selling ready-to-go organic meal bars, recently launched an all-produce quick-service restaurant. According to the San Francisco Business Times, the 1,000-square-foot Core Kitchen is scheduled to open in August and will feature a fast-casual menu built 100 percent with produce. Everything from burritos to stuffed peppers, all made from produce, will be served along a Chipotle-like assembly line.

Kenney and his partners, Michel Francoeur and health and wellness advocate Antony Besso, are catering to the growing demand for plant-based whole foods and plan to make them accessible in an everyday setting. Seasonal juice blends and smoothies are named after local attractions, such as Beachwood (celery, dandelion, pear, grapefruit and lemon), Ojai (coconut water, apple, burdock, ginger and cayenne) and Hollywood (banana, cacao, almond milk, cacao nibs and honey).

As for Andrés, the thought that meat lovers will steer clear of Beefsteak has not sidetracked him whatsoever.

“Why do I know this concept is going to work? Well believe me when I tell you that I have more than a hunch,” he says. “My team and I, we have fed millions of people in our restaurants over the past 20 years and every day they request more and more vegetables.”