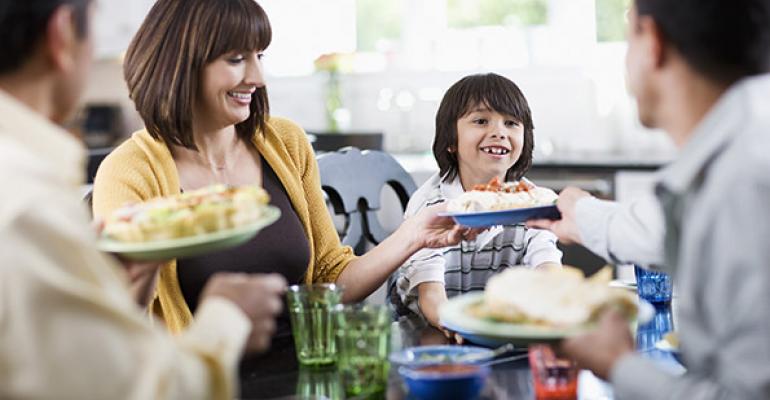 Increasingly sophisticated consumers looking for more flavorful and adventurous dining out occasions are helping to alter the culinary landscape of the Mexican and Hispanic restaurant marketplace.

New generations of Mexican and Hispanic chain operators, led by the game-changing Chipotle Mexican Grill, are successfully catering to customers who are in search of a bolder, fresher and sometimes more authentic ethnic culinary experience.

At the same time, Taco Bell, the segment's long-established quick-service leader, is expanding its reach by staking out a position in the burgeoning breakfast market, introducing its new cast of spicy menu items to a daypart previously known for having a less zesty flavor profile.

The growing fascination with spicy flavors and fresh, distinctive ingredients — like the now-ubiquitous chile pepper and its numerous variations — is helping to fuel the rise of Hispanic cooking here. Among the most popular cuisines are Mexican and Tex-Mex, both of which claim deep roots in the U.S. dining-out experience and which still represent the largest slice of the Hispanic culinary marketplace in this country. But the market also is experiencing an expanding interest in other cuisines of South and Central America and the Caribbean.

The cuisines and ingredient palettes of Latin America vary from country to country, but many have some components in common, such as chile peppers, rice and beans, less expensive cuts of meat, spices and flavorings like cumin, cilantro and garlic, as well as an array of robust salsas and condiments.

Nevertheless, Mexican cuisine and its various branches are expected to remain top of mind with U.S. restaurant patrons. According to Dennis Lombardi, executive vice president-foodservice strategies for WD Partners, a design and development firm based in Columbus, Ohio, the Mexican and Tex-Mex sector remains popular for a variety of reasons. “It has a kind of festive flair,” he says. “It's inexpensive — it has good price points. The free chips and salsa offered in dinner houses add an extra sense of value. And the menus offer varying degrees of spice levels. They have heat to them, which is popular now.

Darren Tristano, executive vice president of Chicago-based research firm Technomic Inc., also attributes the popularity of these cuisines to the heightened use of spices in their recipes. “Spicier favor profiles are definitely driving a younger consumer that is not looking for bland, familiar items. Today's consumer wants authenticity and spiciness,” he says.

Spurred by the growth of the fast-casual “street food” purveyors like Chipotle Mexican Grill, Qdoba Mexican Grill, Moe's Southwest Grill and Freebirds World Burrito, the Mexican limited service sector is alive and well, Tristano says. In fact, over the past 10 years the limited service players have gone from comprising 47 percent of all Mexican restaurant sales to 53 percent today.

According to Technomic, Mexican limited service restaurants have grown from $9 billion in 2003 to $18 billion in 2013, a 7.2 percent compounded growth per year over the decade — despite the impact of the prolonged recession.

However, sales at full-service Mexican restaurants also have grown. Technomic says sales increased from $5.6 billion in 2003 to $12 billion in 2013 — propelled largely in this case by independent growth. “The increased growth of the Hispanic population in this country is driving full-service sales,” Tristano says. “They tend to remain closer to home and support the local community and culture.”

But while older full-service chains like Chi-Chi's have faded from the U.S. dining scene, newer casual-dining players like the publicly held 58-unit Chuy's are nevertheless performing well.

Chuy's, which specializes in such made-from-scratch, Tex-Mex-inspired items as fajitas, tacos, burritos and quesadillas, appeals to millennials with its “high-energy stores with a value/price proposition and a good bar with fun munchies”, Lombardi says. “They've got a good happy hour and a good menu of Mexican/Tex-Mex food.”

Ashley Ingle, Chuy's director of marketing, attributes the chain's popularity and growth — which is averaging about 20 percent annually — to its menu of affordable house-made items that rely on such ingredients as peppers purchased from suppliers in Hatch, N.M. At the same time, Ingle says the brand's menu items are largely viewed by customers as comfort food. “You can't beat a huge burrito with chiles,” Ingle says.

We have mild flavors for customers who are not into spicy, but more people are opening up to spicy all the time.

“Peoples' palates are open more to hotter food,” Ingle says. “We have mild flavors for customers who are not into spicy, but more people are opening up to spicy all the time.”

Lately, many industry observers have been keeping their eye on the segment's leader, Taco Bell, as it flexes its national muscle. The 5,769-unit Yum! Brands behemoth shook up the industry earlier this year when it announced it would go toe-to-toe with quick-service powerhouse McDonald's for a piece of the lucrative breakfast daypart. Since making the announcement, Irvine, Calif.-based Taco Bell has introduced a line of morning menu items that, while owing little to authentic Mexican culinary traditions, nevertheless inject some of the chain's “south-of-the-border” flavor into the daypart.

Initially, Taco Bell launched its assault on breakfast with such items as the Waffle Taco, Steak and Egg Burrito, and A.M. Crunchwrap. More recently, though, the chain has bolstered its morning menu with Grilled Breakfast Burritos, including the Fiesta Potato containing scrambled eggs, breakfast potatoes, pico de gallo and nacho cheese sauce wrapped in a tortilla and grilled; and the Biscuit Taco, featuring a crispy chicken Biscuit Taco with traditional country gravy or a jalapeño-honey sauce.

In the meantime, restaurants occupying the higher end of the Hispanic marketplace are emphasizing more ethnically authentic flavors and dining experiences, says Arlene Spiegel of New York restaurant consultancy Arlene Spiegel & Co. “It's an important at the [high end] that authenticity hit the mark,” she says. “Sit-down high-end restaurants must offer much more made-from-scratch cooking.”

Since founder Josefina Howard opened the first Rosa Mexicano in New York in 1984, the now-16-unit chain has specialized in authentic Mexican preparations. In fact, the menu calls for 10 to 12 different chiles, including jalapeño, serrano, ancho, poblano, guajillo, pasilla, habanero and chipotle. The chain also is famous for its signature guacamole, freshly prepared at table side.

Another New York-based Hispanic chain, 3-unit Havana Central, is building a reputation by serving authentic Cuban and Caribbean dishes. The high-volume restaurants focus on the flavor and presentation of classic Cuban preparations including picadillo, or savory Cuban ground beef; ropa vieja, braised beef with peppers and onions; and rabbi encendido, or oxtail stew

“If you want to create an identity, you have to know what you stand for and celebrate the country's culture through its cuisine,” Spiegel says. “You need to understand the nuance and indigenous ingredients.”