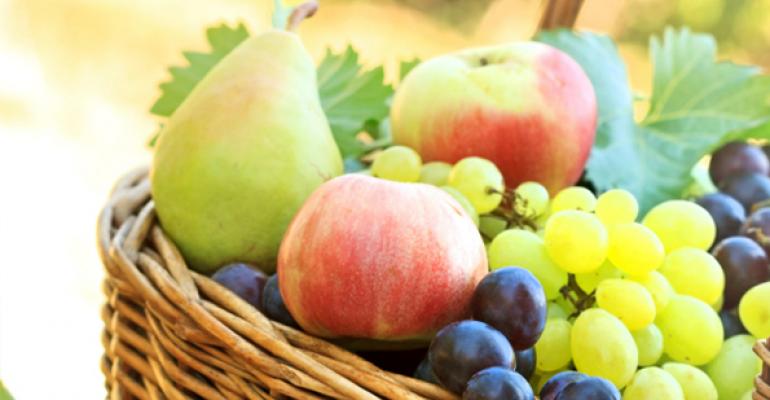 Although most of us had never heard of a polar vortex, last winter proved they’re real. And restaurants around the country are still feeling the effects.

An extended cold wave this past winter meant farmers got seeds in the ground later than usual, which pushed harvest season to later in the summer.

Chef Giuseppe Scurato, who moved Ceres’ Table, an Italian-inspired neighborhood restaurant, into Chicago’s bustling East Lakeview neighborhood in May, hasn’t given up on his expectations for summer produce yet.

“Right now we are in the middle of the season for tomatoes and corn. We haven’t quite gotten off that boat yet,” Scurato says. “But there’s not a lot of time left; it’s going to get cold soon. Some produce might get stuck in the middle and not have enough time to ripen.”

Indeed, the Agriculture Department says U.S. farmers will harvest a record haul of corn and soybeans this fall, according to a USA Today report. The abundant supply of the grain and oilseed and the result of timely rains and moderate temperatures have sent prices for both commodities tumbling.

The report says record corn and soybean production has sent ripples throughout agriculture, resulting in cheap feed for livestock producers. Consumers could benefit from lower food prices, especially for steaks and other meats, but the effect is not expected to be felt for some time, analysts said.

For restaurants in the Midwest, Scurato says the next month or so will be the last chance for restaurants to get some of that primo produce.

“Unless you work with farms that raise cows you can get year-round, your opportunities to work with farmers are winding down,” he says.

Dave Becker, who recently opened Juniper, an Eastern Mediterranean restaurant in Wellesley, MA, has been receiving “all sorts of phone calls” from nearby farmers with an abundance of produce.

“It was a great summer for tomatoes in New England,” he says. “Some summers the tomatoes suck and all you have is kale for three months.”

In Cleveland, a strong farm-to-table movement is leading two local chefs to expand on their partnerships with local farmers, which will be clearly evident in their fall menus.

Ben Bebenroth, chef-owner of Spice Kitchen & Bar, earlier this year signed a lease for Spring Hill Farm in the Cuyahoga Valley National Park, where he looks to expand his produce production. This harvest season, Spice will feature a variety of hardwood-grilled heirloom vegetables and heritage breed animals. Bebenroth also is planning more small plates so guests can enjoy seasonal snacking.

Pura Vida Restaurant will offer a unique fall menu also sourced from nearby farms, some exclusive to chef-owner Brandt Evans. Evans is planning to put a twist on some autumn staples, including pork cheek and goat cheese dumplings with an apple cider glaze, seared sea scallops with a chanterelle mushroom ragout and pumpkin polenta with roasted walnuts and Swiss chard.

As always, pumpkin will be a main attraction on restaurant dishes this fall. Scurato is planning dishes with the traditional fall ingredients: squash, nutmeg, cinnamon, etc.

He’s looking forward to serving a butternut squash ravioli, served with a brown butter and sage sauce and topped with diced beets, red and yellow peppers and pumpkin.

The first fall dish from Becker at Juniper will be braised lamb curry with smoked Kabocha squash, homemade malted barley couscous and “whatever mushrooms the local foragers come our way with.”

Besides entrees, Becker plans some experimenting with fall flavors for cocktails and fall colors for decorating. He’s using extracts from both sassafras and birch bark to soak in grain alcohol and vodka, which provides woody, caramel and cinnamon notes. And he’s plucking as many wildflowers as possible to make fresh centerpieces for his tables.

“You can dry wildflowers and, if they’re edible, like lavender, I’ll make a extract with them,” he says. “Right now sumac is kind of an invasive species here in New England, so I’ll dry sumac and make a tea of it or mix it with alcohol and let it seep. Farmers love it when you can use the weeds they can’t otherwise sell.”