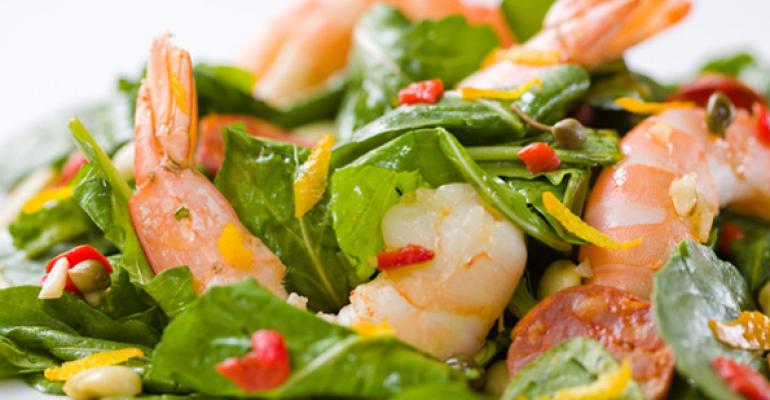 Three years have passed, but the worst oil spill in U.S. history hasn’t been forgotten. There are still reminders throughout the Gulf Coast, from balls of tar found along its beaches to continued news coverage of the civil case against BP and others that could lead to fines exceeding $10 billion.

But inside the Hyatt Regency New Orleans, just rebuilt and reopened after being devastated by the previous disaster, Hurricane Katrina in 2005, the executive chef at acclaimed restaurant Borgne says business is good. Brian Landry, himself a New Orleans native and lifetime supporter of the region and its seafood, says the tourism, seafood and restaurant industries have made great strides since the explosion on the Deepwater Horizon rig that spewed more than 200 million gallons of oil into the Gulf of Mexico.

Much of the waters and marshes where oysters, shrimp and fish were harvested had to be temporarily closed after the spill began on April 20, 2010. Once oil was no longer visible, seafood samples were taken and tested—by smell, taste and chemicals—before the waters were reopened.

“We can say with confidence that Gulf Coast seafood is not only safe to eat, but also deliciously flavorful and healthy,” says Chris Nelson, chairman of the Gulf Coast Seafood Coalition, and co-owner of Bon Secour Fisheries in Alabama. “Wild caught seafood from the Gulf of Mexico is arguably the most rigorously tested in the world. The U.S. Food and Drug Administration, NOAA (National Oceanic and Atmospheric Administration) and state health agencies are continuing their monitoring and testing efforts and have declared that all our seafood is passing tests with ‘flying colors.’”

The menu at Borgne, a John Besh Restaurant focusing on coastal Louisiana cuisine, is proof enough of that confidence. Landry says 80 percent of his dishes feature seafood.

“A lot of those availability issues after the spill were precautionary,” says Landry. “There have been a number of historic events dating back to Katrina that have presented challenges for the fishing community.”

Dealing with those has just become a way of life in New Orleans. Even after the oil spill, Landry was able to maintain the seafood tilt at Borgne. “You hear farm-to-table, which is a nice little catchphrase, but that’s how people have grown up here and operated for years,” he says. “When blue crab takes time off in the early months, it’s not as prevalent on menus, but crawfish are popular then. When they go away, soft-shell crabs make an appearance. It’s made it possible to do what we do.

“When certain food products come in and out of inventory, due to season changes, man-made disasters or weather, we adjust accordingly.”

Louisiana White Shrimp, sheepshead, oysters, flounder, crab and catfish are currently on the menu at Borgne. When Louisiana oysters dried up after the spill, Landry bought from neighbor Texas, which was unaffected by the spill.

How chefs made do after the spill

Landry says customers don’t have concerns over the quality of local seafood, in part because of an existing state program that has tracked all the seafood harvested in Louisiana the past 11 years. It allows retailers to provide specific information to interested customers about exactly what the seafood is, and when and where it came from.

That program has been expanded to Mississippi, Alabama, Texas and Florida as part of a BP settlement whose funding helped lead to the creation of the Gulf Coast Seafood Coalition. The Gulf Seafood Trace program is complimentary through 2014 and offers seafood businesses full supply chain electronic traceability and marketing tools.

The coalition was formed to fight any misperceptions about the health of Gulf Coast seafood, while working to build a brand for a region already providing 70 percent of the nation’s oysters and 69 percent of domestic shrimp.

Like after the Exxon Valdez spill in Alaska in 1989, and the resulting formation of a similar coalition, Landry believes some good can come from the BP tragedy. It’s brought five states together, he says, and led to more collaboration and one united voice speaking to the quality of Gulf seafood.

“Alaska went through similar circumstances and rebounded greatly. Alaskan seafood is a known brand, and people ask for king crab and salmon by that name,” says Landry, who also serves as the Coalition’s executive chef. “The Coalition has the opportunity to do the same here, especially with Gulf shrimp, which we think is a premium product.”