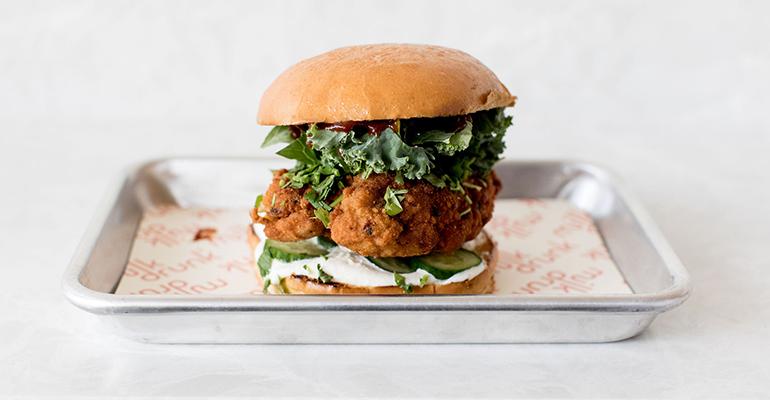 Milk Drunk
Big chains aren't the only ones popularizing the fried chicken sandwich, independents have had them on the menu for years and they all have different twists like The Homer from Milk Drunk (pictured).
Food & Drink>Food Trends

The biggest menu newsmaker of the past year has been Popeyes’ introduction of its fried chicken sandwich. Making an August, 2019, debut in a market already saturated with chicken sandwiches, the launch drove double-digit sales increases for the brand, sparked Twitter skirmishes with competitors and spawned a steady stream of wannabes from sources as disparate as Curry Up Now, the fast-casual Indian chain, and the red-meat-meisters at Outback Steakhouse.

While the feeding frenzy sparked by Popeyes has grabbed headlines and caused a chain reaction, it has overshadowed innovative fried-chicken sandwiches by chefs and independent restaurateurs that are craveable, memorable and clearly set them apart from the pack.

Culinary technique. The Chicago Tribune pronounced the fried chicken sandwich at Roister the best in the city based on its “shatteringly crisp crust” and “wildly juicy interior.” Given the restaurant’s pedigree as the casual sibling to multi-Michelin-starred Alinea, it’s probably not surprising that the cooks must work the fry station for many months to get the brining-breading-frying process just right. Finished with chamomile mayo and sunchoke hot sauce, this is serious stuff that likely contributed to Roister’s own Michelin star.

Milk Drunk in Seattle takes the chicken sandwich seriously, too. For The Homer sandwich, chicken thighs are double-fried and topped with cucumber, cilantro, kale, whipped garlic and date ketchup. Also in Seattle, Skillet’s option is brined for 48 hours with fennel, then coated in fennel-seed batter; after frying, it’s topped with kale and charred, pickled pepper aïoli. Fennel also figures in the breading at Bullard in Portland, Ore., whose entry is spiked with cayenne and fennel; the finished product is topped with Duke’s mayo, sweet-and-spicy jalapeño jelly and house-made dill pickles.

Southern accents. Bullard’s Duke’s-and-hot-pepper-jelly nod to Southern ingredients is echoed by many other chefs. Chicago’s The Frontier is known for whole-animal, wild-game cookery, but the tasty fried chicken sandwich on the pub menu gets points for its molasses mustard. Elsewhere in town, Big Jones tops its version with chow chow, a southern type of relish, and Beacon Tavern opts for pimento cheese.

Atlantans can choose from a wide range of offerings that reflect their Southern-fried location. Folk Art features diner-style cuisine that includes a fried chicken sandwich topped with collard coleslaw, while nearby SideChick goes with white barbecue sauce, an Alabama favorite. 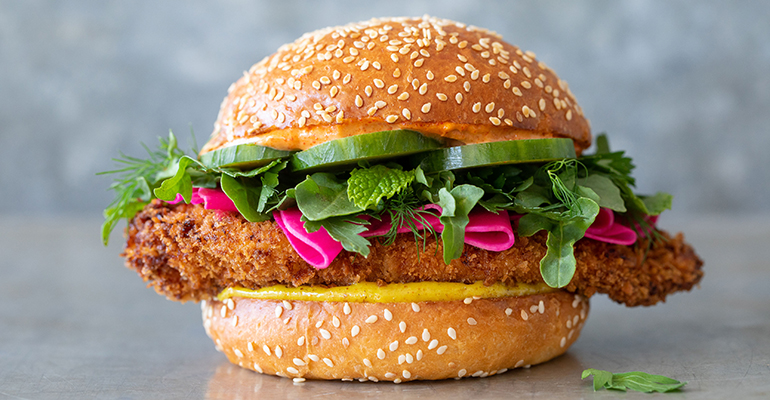 Other chefs trade Southern tastes for local preferences. For example, BRD in Baltimore uses Old Bay, a seafood seasoning popular in the region, and in Northern California, Gott’s Roadside pays homage to produce.

Among the toppings on the Chicken Schnitzel Sandwich at Gott’s are arugula-herb salad, cucumber and pickled turnip.

Global pantry. The fried chicken sandwich also serves as starting point for a range of international flavor treatments. Hermosa in Chicago offers a Cambodian-inflected version, in which a chicken thigh is marinated in fish sauce and soy sauce and kroeung, an aromatic spice paste. The sandwich is served with spicy green papaya salad, chopped long beans and Asian herbs over the top.

Numerous Korean-influenced variations have been popping up. At Bok a Bok in Seattle, a six-flour blend makes for a tempura-like batter for the thigh meat that provides characteristic lightness, and the sauces include a spicy medley of homemade hot sauce, red chile aïoli, pickled serrano peppers and kimchi.

In Los Angeles, the menu at Father’s Office features a fried chicken sandwich with cabbage slaw, kimchi vinaigrette and scallion, while at Fred’s Meat and Bread in Atlanta, the Korean Fried Chicken Sandwich comes with spicy cucumber, kimchi cilantro and doenjang aïoli made from fermented soy beans.

Taiwanese cuisine has been on the cusp of crossover, and Ekiben in Baltimore steps up with The Neighborhood Bird consisting of a Taiwanese curry-fried chicken thigh topped with spicy sambal mayo, pickles and fresh herbs.

Lower on the spice scale but high on the comfort index is the Chicken Katsu Sando from Momonoki in Atlanta. This take on the Japanese lunch staple is panko breaded and finished with homemade katsu sauce, shredded cabbage and Kewpie mayo, then nestled between two pieces of pillowy soft Japanese milk bread.

Looking ahead, the trend shows no sign of slowing. In late August, Wendy’s introduced a new Spicy Crispy Chicken Sandwich, and Popeyes unleashed its latest marketing salvo in support of its madly popular entry. Ongoing press reports say that both KFC and McDonald’s are testing their own versions, all of which indicate unflagging consumer interest that will provide the opportunity and impetus for continuing creativity from independent chefs and restaurateurs.