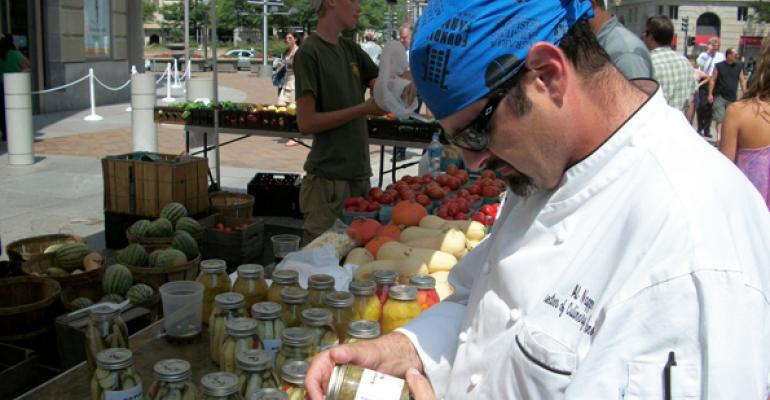 Peasant food? Control-freak chefs? Technology addicts so isolated they will turn off their smartphones and engage in face-to-face conversations with strangers at communal tables? Those are just a few of the trends the market research analysts at Los Angeles-based Datassential have unearthed after sifting through a database of 7,000 restaurant menus, 4,500 of them from independent full-service restaurants.
Here’s what Datassential says is trending right now.

“With cocktails at center stage and mixologists offering specialized bitters, simple syrups, and the like, specialized spirits, such as a flavored gin or a particular blend of whiskeys, are sure to follow in 2013.” Datassential notes that upscale independents source them by partnering with local or regional microdistilleries, whose numbers have increased from 50 in 2005 to more than 250 today.

2. The chef makes the rules. Say goodbye to “have it your way” and mass customization and hello to “my way or the highway.” “Many chefs have a vision for their creations and want their food enjoyed in a specific manner. That's why chefs are taking menu power back with chef-driven tasting menus,” the researchers say.  Not only are tasting menus offered in addition to regular menus at some restaurants, at an increasing number of restaurants, tasting menus are the only option.

3. Upscale diners. The Datassential crew states that “We predict more high-end chefs will explore the upscale diner trend, paving the way for a new kind of American bistro—one that combines the comfort and familiarity of old-school diners and their classic dishes with the quality and innovation we've come to expect from upscale establishments.” Brand-extending fine-dining chefs already on board include Stephanie Izard, chef/owner of Little Goat Diner in Chicago, and Kevin and Terresa Davis, proprietors of Seattle’s Steelhead Diner.

“These chefs and the ones who will follow their lead this year present a version of upscale diner food that brings fresh ingredients, premium proteins, unusual food pairings, and other tenets of fine dining to dishes formally known at midscale eateries,” the analysts predict.

4. Elevated peasant foods. Have gourmet food trucks gotten a little too fancy? Some chefs think so, and they’re going back to the basics. In some cases, way back. “Unlike street food, peasant food—casseroles, stews, and so forth—is hearty, rich, and meant to be savored rather than eaten on the go. But like street food as of late, modern takes on peasant food are elevated with high-quality ingredients and presentations,” the Datassential crew points out.

Rustic Italian, Cajun and Creole, and old school French bistro classics are just some of the culinary styles embraced by this trend. However, purveyors of these kinds of dishes must walk a fine line.

“Over the next 12 months, restaurants will continue exploring the rustic sides of these popular cuisine types as a way to attract customers and present something new and unfamiliar, yet comforting in its heartiness and down-home feel.” Pulling off a dish customers find to be both unfamiliar and comforting might be a tall order for many restaurant kitchens.

5. Communal dining. Who eats at those communal tables that are the centerpieces of so many restaurant dining rooms? “This trend is a backlash against our increasingly tech-savvy-—and therefore more isolated—society. When people spend all day on computers or glued to their smartphones, they're less likely to meet new people or engage in face-to-face conversations. By sharing tables, it creates an intimacy between diners that's meant to promote social interaction and increase community feel,” these trend researchers say. They see more communal tables as a strong trend going forward.

6. Chains going local. Independent chefs have largely had food festival appearances and farmers markets gigs and TV demos all to themselves up until now. “Thanks to the multitude of food-focused TV shows, blogs, and other publications, chefs are now celebrities outside of the foodservice world. Those who want notoriety today have to work just as hard outside of the kitchen: writing cookbooks and memoirs, doing PR tours, participating in TV competitions, and otherwise promoting their personal brands,” the researchers say.

Now national chain restaurants want in on this action. One result of all the self-branding on the part of independent chefs is that they and their restaurants become fixtures in their local communities. “We expect to see chains follow these chefs by directly engaging with consumers more over the next twelve months,” Datassential predicts.

7. C-store and deli makeovers. The Datassential analysts seem a tiny bit skeptical of their own prediction on this one. “More grocery stores and convenience stores will add upscale touches to their menus and atmospheres this year as they compete with traditional dining destinations for consumer dollars. We'll see how this push of quality offerings into new retail locations—and the resulting competition between retail stores and restaurants—further develops in 2013.”

8. Meatless Monday. “Meatless Monday is a public health campaign that asks people to go without meat for at least one day a week to reduce overall meat consumption for a healthier planet and public,” Datassential explains. “As more people become aware of this movement and jump on board in 2013, restaurant operators and companies can expect more requests and questions about their vegetarian offerings.” For restaurants that want to explore their options in serving food cost-friendly vegetarian meals, this may be a good point of entry.

Barbecue joints and celebrity chefs have had occasional success on the food product front. But, says Datassential, “Now you see casual dining independents jumping on this trend as well. Because these operators tend to offer more authentically ethnic and progressive menus, they're able to include one-of-a-kind sauces with flavors that are seen as unique and adventurous to consumers.” It’s great if a restaurant’s products make money, of course, but the branding and word-of-mouth implications are keys, too.

10. Franchising local. Restaurant operators will have new competition on the “we serve local” front, but Datassential thinks it will drive better accessibility to locally produced products for all. “Many fine dining and casual dining independent restaurants formed partnerships with nearby farms or started their own restaurant gardens,” the company says. “This environmental-mindedness is spreading into casual dining chains and QSRs, too. Many already include buzzwords like ‘organic’ and ‘all-natural’ on their menus, but now they want to offer "’local’ to their customers as well. As more companies seek entrance into the local movement, the number of distribution networks between smaller farms and bigger organizations will grow.”

As its 2012 trend list shows, Datassential has a good feel for both what’s hot now and what might become hot in the months ahead.  Keep an eye on the trends they’re calling out here. Some could, indeed, turn out to be the next big things in the restaurant industry.