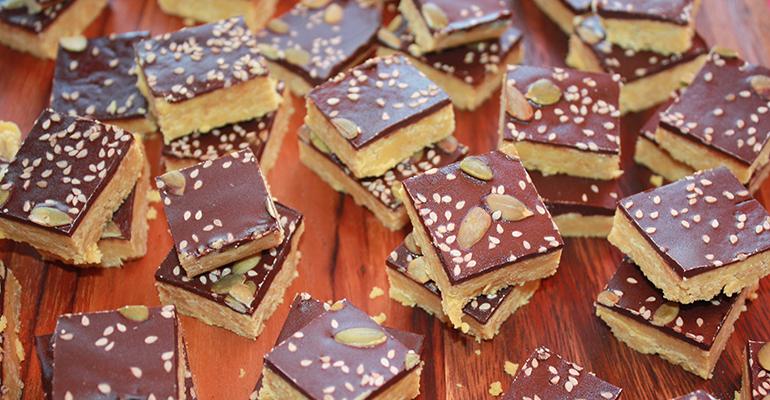 Indian and Mexican dishes get an added element with cinnamon, clove and nutmeg

Nothing signals the end of summer like the return of autumn spices to menus. This year, diners can enjoy the fall flavors they crave — like pumpkin, cinnamon, cardamom, clove and nutmeg — in a host of innovative desserts.

Beginning in October, Santiago will serve Mote Pudding with Huesillo. The Chilean dish is made by nixtamalizing mote, or wheat berries, in a peach tea brewed with an assortment of autumn spices such as cinnamon, cloves, ginger and cardamom, and is served with huesillo, or dehydrated peaches. Nixtamalization is a process by which grain is soaked and cooked in an alkaline solution, typically lime or lye, and hulled.

“When mixed together, spices like cinnamon, ginger and clove complement one other and add warmth to the overall flavor of the dish,” Santiago said.

Given the success of a classic version of the recipe Santiago served during PeachFest in Atlanta, in August, he predicts the dessert will be popular.

Lorena Garcia, chef at Chica, a 50 Eggs concept at the Venetian Hotel in Las Vegas, is also playing with autumn spices in Latin cuisine with her Churro Fried Ice Cream Pops. The caramel ice cream pops, coated in cinnamon churro crumbs and served with vanilla bean anglaise and whipped cream, have been a hit since they were added to the menu on Mother's Day, in May. “I love using autumn spices in desserts, especially cinnamon,” Garcia said. “Cinnamon is a special spice that you can use for its flavor or to enhance the flavor of chocolate and coffee in desserts.”

Traditional Indian sweets featuring autumn spices get a twist at Pondicheri, with locations, in New York City and Houston. Chef and restaurateur Anita Jaisinghani makes chocolate mithai. Mithai is a chickpea fudge flavored with cardamom. She adds a glaze of ganache and tops the fudge with sunflower seeds and pumpkin seeds.

“We like to say that preparing the Mithai is an art that we have perfected – for the most part,” Jaisinghani said. “The besan mithai [made with gram flour] is pretty traditional, but we have created our own twist by adding chocolate.”

Also on Jaisinghani’s menu are Ginger Cloud cookies, or molasses cookies with ginger, cinnamon, cloves and candied cashews, and Gulab Jumun doughnuts, or dough balls spiced with mace, cardamom and cinnamon and soaked in rose-cardamom syrup. The Nutmeg Spiked Butter Pudding at 701 Restaurant in Washington, D.C.

“When you take a bite of the finished dessert with all of the ingredients combined, it is reminiscent of pumpkin pie,” Moscatello said. “The aromas and flavors bring me back to my childhood, baking pies with my mother.”

“This dessert is a simple yet elegant tart that uses the quintessential flavors of the fall season,” executive chef Joseph Paire said.

Inspired by a love of pastry and the joy of using a typically savory ingredient in a dessert, Paire’s dish features pears poached in sherry, sugar, whole allspice, lemon zest and vanilla bean and a filling of roasted honeynut squash blended with cinnamon, ground allspice and nutmeg. It’s served with a scoop of smoked honeynut gelato.

“One of the main reasons I like autumn spices is the depth they lend to a dish,” Paire said. “As a chef, being able to blend such bold flavors without overpowering a dish is a true work of art.”