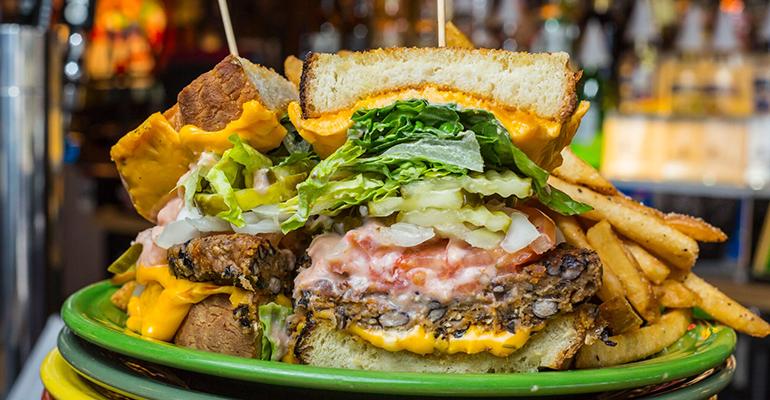 Chefs develop their own plant-based burgers without the processing

“Plant-based protein” seems to be on everyone’s lips these days, both figuratively and literally, as restaurateurs rush to offer meatless versions of their customers’ favorite foods.

Meat-free burgers, in particular, have captured headlines as quick-service chains from Burger King to White Castle have introduced plant-based versions of their signature items.

But there are other, sometimes much older paths to meatless burgers, and many independent operators are taking those routes, using minimally processed vegetables to offer accessible, tasty sandwiches to their guests. 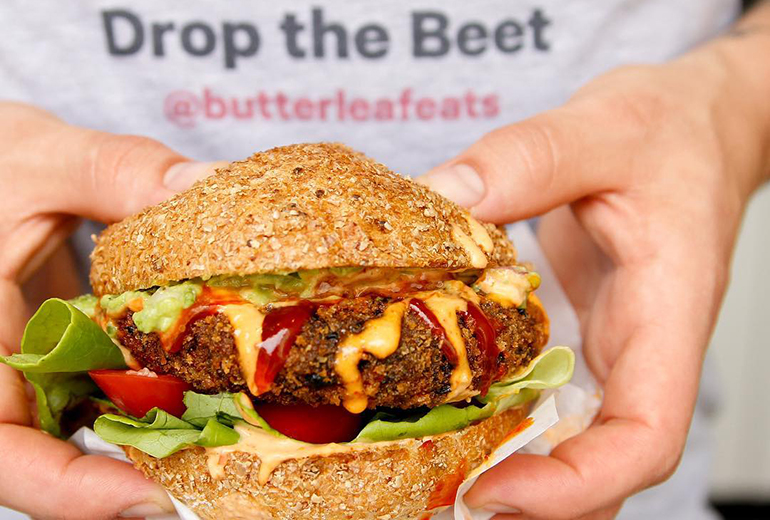 Related: Plant-based protein: A fad, or here to stay?

To be clear, when marketers refer to “plant-based” food, they mean food that’s completely meatless, and without dairy or eggs; it’s a term they came up with when they realized that “vegan” had negative connotations for many people, who might want to cut down on meat consumption for various reasons but didn’t want to join a particular cause or to label themselves.
Andrew Gruel is targeting meat eaters at Butterleaf, a restaurant in the Trade Food Hall in Irvine, Calif., that bills its cuisine as “vegetarian for non-vegetarians.”

That makes sense. Although many Americans — the majority, according to some studies — are trying to cut back on eating meat, the number of actual vegetarians has remained fairly constant for the past 20 years, at around 5%.

Butterleaf’s burger is made with “a ton of vegetables,” Gruel said, namely ground carrots, onion, peppers, broccoli and cauliflower. They’re bound together with cooked quinoa and flavored with nutritional yeast to give it all a richer flavor.

“In order to keep it vegan, but still maintain a crispy exterior, we dip it in a cornstarch bath [just a slurry of cornstarch and water] then panko breadcrumb to achieve the same effect you would get with an egg wash,” he said. It’s briefly fried and then finished in the oven. The burger is $9.

“We saw a growing section of our guests requesting more vegetarian and vegan options,” said Matt Fish, founder of 13-unit Melt Bar & Grilled, based in Cleveland. Although at its core Melt is a grilled-cheese sandwich restaurant, it also offers a wide variety of salads, soups, sandwiches, appetizers, mac and cheese and burgers. 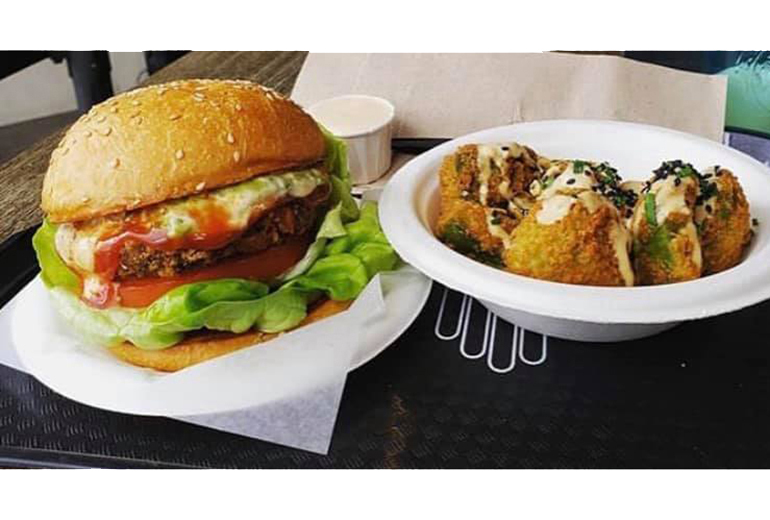 Among those burgers is the Good Burger, a vegetarian option that Fish and his team developed years ago.

The vegan, gluten-free patty is made at Melt’s production facility from a base of black beans and oats with a blend of herbs and spices. It’s shipped to the restaurants raw and is cooked to order on a griddle dedicated to non-meat items, which also include an eggplant Parmigiana and a mushroom sandwich.

“It is quite popular,” Fish said. “It will never be a top seller for us, but it does continue to perform well and has earned a permanent place on the menu.”

Last year Fish added a patty made by Beyond Meat as an option for an extra $3, and he says it sells well, too “and has actually increased our overall veggie burger sales.”

“Burgers ... have evolved as an increasingly flexible food in terms of what they are made of,” said Ken Rubin, chief culinary officer of Rouxbe Online Culinary School. “Plant-based burgers that mimic meat will remain popular, but there are increasing opportunities to enjoy a burger made from … vegetables, grains, beans, and mushrooms without compromising satisfying textures and rich flavor profiles. Plant-based burgers will absolutely expand the burger category and lead to an increased need for chefs to differentiate themselves with unique offerings.” 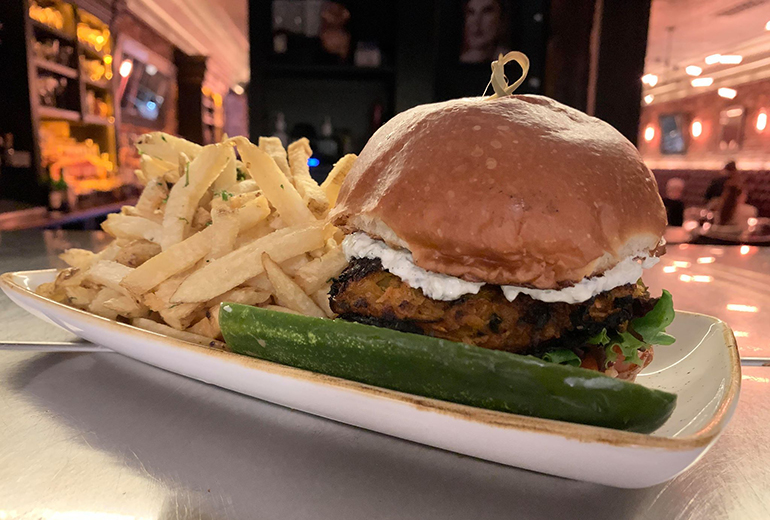 Rouxbe has burger recipes featuring relatively traditional vegetarian options including tempeh, mushrooms with lentils, and pinto beans with quinoa, along with a patty made from cornbread mixed with mirepoix and almonds, and one made with grated beets and other vegetables mixed with brown rice and mashed potatoes. Most of them also have plenty of herbs and other aromatics.

Dean Wirkerman, chef at Cardinal Spirits, a craft distillery in Bloomington, Ind., derives inspiration from his travels in India (“one of the most vegetarian-friendly countries I know of,” he said), for his veggie burger, which is made from a blend of ground sweet potatoes and regular potatoes, gluten-free starch, ground soaked chickpeas and an Indian spice blend. It’s served on a bun with shiitake mushrooms, lettuce, tomato, mayonnaise, cheddar cheese and a side of fries for $15.

“People love it,” he said, although he admitted some customers aren’t thrilled with the soft texture.

Sweet potatoes are the base of the Possible Burger at Ellis Square Social in Beverly, Mass., where chef Jay Murray combines the tubers with garlic, onion, turmeric and panko.

“Then we blacken it with a house Cajun spice,” he said. “We serve it with tzatziki, lettuce and tomato on a brioche bun.” It’s $14.

“We really wanted to do something other than a mélange of grains and/or legumes that you see everywhere,” he said. “We weren’t looking to reimagine someone else’s veggie burger, but rather tried to create something unique for us.” 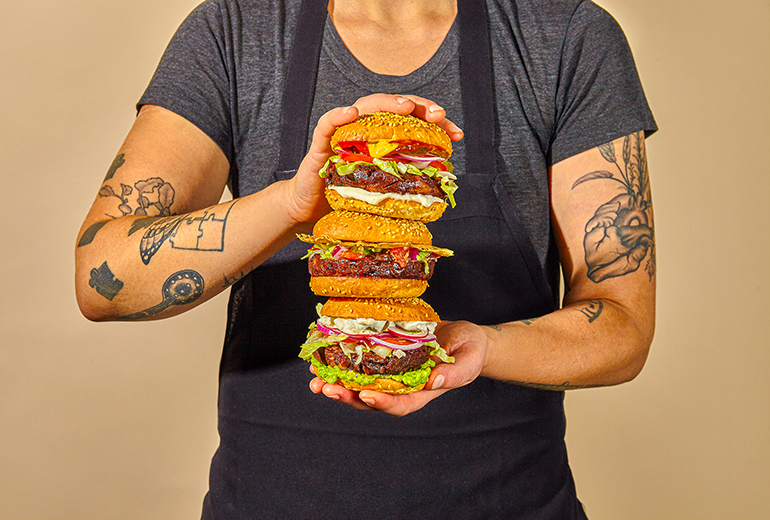 “I was actually inspired by the whole-foods simplicity of Buddhist mock-meat traditions,” she said. “The Chinese recipe for yuguanfei lends itself well to a juicy burger patty that maintains its shape and doesn’t rely on all those lab-grown techniques or ingredients.”

Yuguanfei, which unfortunately translates to “jade-filled lung,” couldn’t have lab-grown ingredients, because the recipe dates back some 900 years to the imperial court of the Song Dynasty. Traditionally, according to a blog entry by anthropologist and premodern Chinese Buddhism expert Robban Anthony John Toleno, the dish is traditionally colored red with a mold-cultured rice and given the appearance of fatty striations by inserting fried dough. Cohen said her version is made with ingredients that could be found in any kitchen pantry, including portobello mushrooms, cannellini beans and chile. Her burgers range in price from $9.95 to $11.95

Correction, Jan. 21, 2020: The spelling of Dean Wirkerman, chef at Cardinal Spirits, has been corrected.