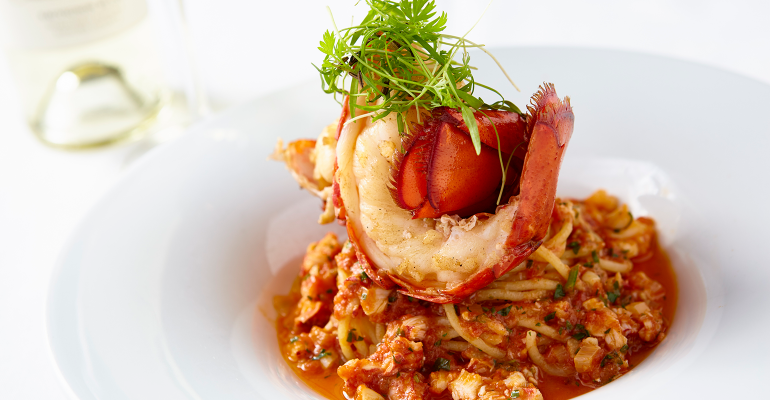 About a third of fish sold in the United States isn’t what its sellers claim it is, according to the conservation group Oceana. Tilapia is often marked as red snapper, yellowtail as mahi mahi, mako shark as swordfish, and farm-raised salmon as wild salmon.

Bill Telepan doesn’t think that would happen at his restaurant, which is also named Oceana, and is located in New York City. He took the helm as executive chef in October, after closing his namesake restaurant, also in New York City, earlier last year.

“I’m not going to try to get one over on people, and we know what the stuff looks like,” Telepan said. “A snapper’s a snapper. A trout’s a trout.”

Telepan noted the difference in texture between wild King salmon from Alaska, which is currently out of season, and farm-raised Atlantic salmon he sources from Denmark.

“The meat on wild salmon’s not as slick as farm-raised salmon, and the fat lines are a little finer,” he said. “You can totally tell. And when you rub your hand on [wild salmon], it has more texture.”

It’s also a matter of using reputable suppliers and distributors, who, by definition, have reputations to live up to, Telepan said.

That includes Sea to Table, which connects chefs with fisherman, albeit sometimes at a markup that Telepan said he can’t justify.

He also plans to rejoin Dock to Dish, which he belonged to at his former restaurant Telepan.

Similar to a Community Supported Agriculture share group, Dock to Dish delivers 50 pounds of whatever fish they happen to catch, “and we wouldn’t know what it was until the night before,” Telepan said.

“We would run a cooked entrée and a crudo or other raw appetizer, and whenever we did that the stuff would be gone in a day or two,” he said. “Even if we weren’t that busy, it would fly out.”

Although salmon, chicken and steak always have to be on the menu, Telepan said, adventurous customers like to try new things. Up to a point, at least.

“My [lobster supplier] said, ‘I’ve got a 125-pound opah. Do you want it?’ So I swapped out one of the crudos, ran it as a simply prepared dish and then used it in a swordfish [preparation],” he said.

Those sold fine, but he cooked the opah cheeks sous-vide and then pan-fried them.

“We sold the opah well, but when we added the ‘cheek’ to it, it’s a turnoff to some people,” Telepan said. “But I like throwing things like that out there.”

It’s also part of the fun of being a chef, he said.