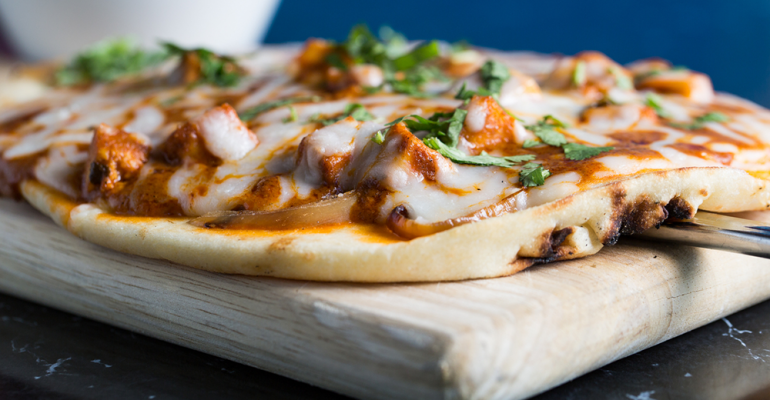 Curry Up Now tops its Naughty Naan flatbread with mozzarella, onion, jalapeño and a choice of protein.
Food & Drink>Food Trends

The gastronomy of Eastern Mediterranean and Middle Eastern countries is in the spotlight at the moment, thanks in equal measure to the appeal of consumer-friendly national cuisines, the rise to prominence of mediagenic chef advocates like Israeli-Americans Alon Shaya and Michael Solomonov, and the inevitable influence of geopolitics on the food we consume.

The greatest culinary gift from the Middle East, however, predates current trends by several millennia: bread. The abundance of grains like wheat, rye and barley there led to milling and baking, which resulted in the flatbreads that are front and center on contemporary menus.

Pita and laffa are indigenous to the region. Both are lightly leavened, but laffa is denser and chewier, and at the Chicago-based, 41-unit Roti Modern Mediterranean, they are freshly baked and appear throughout the menu. Pita stars in specials like the Classic Pita filled with char-grilled chicken, red cabbage slaw, house-made hummus, garlic and spicy green skhug (Middle Eastern hot sauce), while the laffa is served warm in a series of wrap sandwiches with proteins like salmon kebab and sauces like tahini or roasted red pepper.

Lavash is another traditional flatbread, and it is on offer at St. Louis-based Panera Bread, where a whole grain version is the carrier for breakfast sandwiches like the Mediterranean Egg White Breakfast Wrap and Chipotle Chicken, Scrambled Egg and Avocado Breakfast Wrap.

Speaking of flatbread, Indian naan is also having a moment. Emerging fast-casual chains get the credit for its increasing popularity, as with the three-unit NaanStop in Atlanta, where the leavened, tandoori-baked bread is the basis for items like the Punjab Dal Naanwich with stewed lentils and Kabob Naanwich with Indian Turkey Sausage. San Francisco-based Curry Up Now, which operates eight restaurants and three food trucks, offers an interesting twist with Naughty Naan, in which the flatbread substitutes for pizza crust and is crowned with mozzarella, onion, jalapeño and a choice of protein.

Some operators look farther East for inspiration, as with ppang. Ppang — the Korean word for bread — also signifies a loud noise or a pop, and it receives title billing at Bāng Bar in New York City, which features breakfast and lunch sandwiches on ppang. The former are filled with mortadella and cheese, smoked salmon and cream cheese or simply sweet cinnamon-sugar. The lunch crowd can enjoy ppang wraps stuffed with meat from twin rotisseries, one of which rotates with yakitori-style glazed chicken and the other with gochujang-rubbed pork.

Japanese milk bread is also having a moment, thanks to the katsu sando, cutlet sandwiches served on the super-soft Japanese bakery staple. The item has sparked a boomlet on both coasts and at points in between, like Momonoki ramen bar in Atlanta. The menu boasts a range of katsu sando options including fried chicken, cheese pork, shrimp and Japanese tartar, and avocado shiitake. Happy hour imbibers at Tsubaki, a classic izakaya in Los Angeles, can enjoy a Chicken Katsu Sando made with fried chicken thighs on milk bread and garnished with onion rings; while at Manhattan’s Peach Mart, patrons can grab egg or potato salad sandwiches on the pillowy white bread.

Other chefs step way outside the box, as they adapt traditional menu items for use in distinctly nontraditional sandwiches and handhelds. The Pastrami Bao Bun, a menu mashup tested this fall by Panda Express, for example, featured a slice of pork belly seasoned with pastrami spices that was folded into a steamed bao bun.

Then there’s the emergence of bing, which is short for jianbing: a savory Chinese crepe that has been popping up all over. Back in 2012 in Oakland, Calif., Jian Bing Johnny’s started serving jianbing on wheels via a food bike that made the rounds of East Bay communities. To the north in Portland, Ore., Bing Mi is a food cart that has been doing the bing thing since 2014 with a single-item menu; here the bing is filled with egg, pickled vegetables, herbs and crunchy wontons, and topped with hoisin and chili paste.