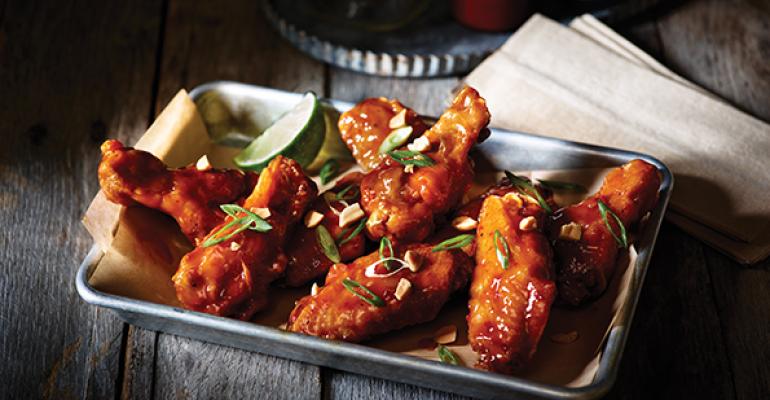 Attack of the snacks

No matter what you call downsized dishes, they have a profitable place on menus. &bull; See more Food Trends

When Victor Scargle, executive chef of Lucy Restaurant & Bar in Yountville, CA, goes out to eat, he fancies menus that let him piece together a meal of his own design. They don’t necessarily have a beginning, middle and end. Sometimes they feature one small dish; other times they feature many.

“I enjoy being able to try a lot of little, different things,” Scargle says. “Snacks are the perfect option for me.”

For restaurants looking for ways to drive traffic and sales, especially in off-hours, snacks might be the golden ticket.

According to research firm Technomic, overall snack consumption is on the rise, with half of today’s consumers (51 percent) owning up to at least two snacks a day—up from the 48 percent who said the same in 2012.

“Our behavior is changing in terms of eating,” says Bonnie Riggs, restaurant industry analyst with The NPD Group. “And our definition of a snack is also changing.” Items once earmarked as mains, like burgers and tacos, are now often considered a snack, she explains.

“Menu mix is something every chef has to figure out,” says John Kunkel, founder and c.e.o. of the Miami-based restaurant group 50 Eggs, Inc. “But to succeed, you have to listen to what your customers are saying. You have to pay attention to what’s selling. And you have to be responsive.”

Snacks—or Nibbles and Bites, as Lucy’s menu calls them—have helped the Napa Valley restaurant distinguish itself from nearby restaurants that hang their hats on tasting menus and hours-long dining experiences. Lucy’s snacks, which are small and quick, include whimsical and approachable dishes that pay homage to the restaurant’s field-to-fork cuisine.

“Our dirty chips are a perfect example,” says Scargle. Made from Kennebec potatoes, the chips ($5) are served with a Point Reyes blue cheese dressing as well as house-made barbecue sauce. Other best sellers include beer-battered onion rings ($6) and a flatbread ($6) made with spinach pesto, Brussels sprouts, wild mushrooms, Fontina, a fried egg and aged balsamic.

“Snacks help us capture guests who don’t want a formal dining experience,” Scargle notes. “They want something small after wine tasting all day, or before they go out for the evening, or they want to design their own tasting menu with a mix of snacks and half-size entrees.”

Cross-utilization of product is also an important part of Lucy’s snack strategy.

“You don’t want an ingredient on your line that you can’t use in a few different places,” says Scargle.

You also don’t want a dish on this part of your menu that you can’t execute quickly.

At 50 Eggs’ Yardbird Southern Table & Bar, with locations in Miami Beach and Las Vegas, snacks play the fast starter position. “We wanted a series of dishes we could get to the table quickly,” says Kunkel.

“Our Miami Beach kitchen is small, but efficient,” says Kunkel. “When we’re developing new snacks, we pay close attention to how we can make these items quickly without putting too much pressure on the kitchen. We need to be able to execute them with a full dining room as well as late night when we’ve closed down to only two stations.”

Yardbird’s quick bites choices appear alongside a small plates category. Differentiating between the two comes down to size, speed of service and variety.

“I want our guests to be able to have a shared dining experience,” says Kunkel. “Snacks give us an opportunity to showcase more. They bridge the gap between traditional menu items and dayparts.”

“We’re on Michigan Avenue, so our menu needs to offer something for everyone all day long,” says Bannos. “There are many different types of eaters who dine with us. Snacks and quick bites help us to meet every need.”

The Purple Pig’s quick bites include pork-fried almonds with rosemary and garlic ($6); salt-roasted beets with whipped goat cheese and pistachio vinaigrette ($9); chorizo-stuffed olives ($5); a variety of local and Mediterranean cheese and house-made charcuterie.

“Snacks give diners options,” says Bannos. “They can segue into a larger meal or simply be the perfect accompaniment to a cocktail or glass of wine.”

“When we have a long wait, we’ll send out some pork jerky that we make from thin slices of pork loin marinated in Spanish spices and dehydrated,” he says. “It keeps people happy and it’s easy for us.”

At Tacolicious, a sit-down, cocktail-driven taco restaurant in San Francisco, snacks set a guest’s palette up for what’s to come.

“Antojitos don’t fill you up, but they get the party started,” says co-owner Sara Deseran.

The restaurant’s motto—fingers not forks—plays well into its snack strategy, which includes 16 items like made-to-order guacamole ($8.95), ceviche ($12.95), and albacore tuna tostados “contramar-style” ($12.95).

“Mexico is a culture of snacking,” says Deseran. “Everywhere you look, street vendors are selling everything from spiced nuts to fruit sprinkled with chile salt to street-sized tacos and more.”

Tacolicious’ snacks are less composed than other part of its menu. They’re casual, salty and good with a fresh-squeezed juice-driven cocktail.

“We have many people who come for a little bite to eat and a cocktail and leave,” says Deseran, adding that this leads to quick turnover and a steady stream of customers. “Snacks are great because they don’t demand much of the guest.”

Casual dining giant Applebee’s is hard at work positioning snacks as an important part of its reinvention story.

“Snacks are popular with Millennials and Gen Y,” says Jason Reeves, senior brand manager. “Smaller sized dishes are approachable and accessible. There’s less of an investment, which encourages guests to try them. They’re also flexible and can be eaten at varying dayparts.”

“They’re a fun expression that encourages fun eating,” says Reeves. “They can easily be mixed and matched, too.”

The snacks live on the chain’s new Apps and Bar Snacks menu alongside larger scale appetizers. What differentiates the two isn’t necessarily important because they can all be mixed and matched in a Build Your Sampler plate.

“The snack category gives us a chance to push the boundaries,” says Reeves. “We were able to lower the price point to attract guests who might only come for a drink or who don’t usually start with an appetizer.”

One of the challenges Applebee’s has faced with this new launch is educating the public.

“People don’t expect brands like us to offer snacks,” says Reeves, who hopes to add incremental sales with enough promotion. “But snacks speak to the heart of what consumers want: more choice, more variety, more excitement and more adventure.”

“Snacks are a different kind of food,” says Alan L. Gaylin, founder and c.e.o. of Bread & Butter Concepts, which owns seven other Kansas City restaurants and plans to open for three more by next summer. “We used to have snack menus in the bar during happy hour. But our focus has changed. Snacks help us be unique and attract guests who want a couple of drinks and a quick bite before they go to a game or an event.”

“The market is changing,” says Gaylin, adding that snack sell best between 4 and 6 p.m. and after 9 p.m. “Guests want smaller foods at all hours of the day in all parts of the restaurant.

“And sales are growing,” he continues. “People are changing the way they eat. The younger set eats out more often. They like two drinks instead of one. They know more about food than any generation before. And they consider two or three small bites to be a suitable meal or between-meal dining option.”

Snack sales have increased at Lucy, too.

“The numbers are up and they continue to grow,” says Scargle. “Snacks helped us increase traffic in a highly competitive market. They draw guests in and encourage them to stay.”