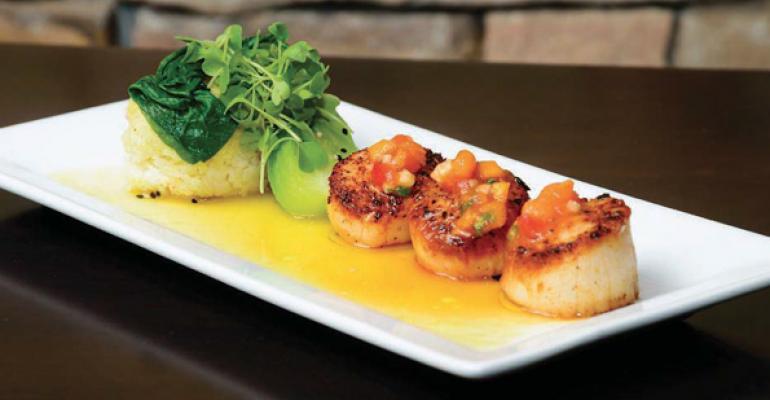 3 simple steps to a healthier menu

Chefs across the country are catering to a leaner and meaner American diner.

In the late 1990s, Richard Sandoval set out to change diners’ perception of Mexican food as a heavy indulgence. He hearkened back to the days he assisted his grandmother in their Mexico City kitchen, chopping fresh ingredients from neighborhood gardens. In 1997, when Sandoval opened his first Latin concept—Maya in New York—he made a conscious decision to use fewer processed foods, leaner meats and lighter ingredients, such as vinaigrettes, to cut the fat but boost the taste.

The 2011 James Beard nominee says he was an early adopter of the healthy-eating trend, not knowing at the time that Americans would soon be fed up with their image as an overindulgent, even obese, population. “We started seeing it five years ago, absolutely. People started to care more about what they ate,” Sandoval says. “Now more than ever people want healthier options.”

Early on, Sandoval found the key to catering to this segment of consumers: hire a dietician. “A lot of it is about the calorie intake,” he notes. “You have to be conscious about it and use foods that are not highly processed.” As a result, he says, “We are choosing a lot of fresh product; and it’s also about the ingredients. You want to go for leaner meats and get away from a lot of fats.”

Like Sandoval, many restaurateurs have been well-served staying on top of the diet trends and adapting their menus to consumers’ healthier habits. Chefs across the country are taking simple steps to cater to a leaner and meaner American diner.

While the definition varies depending on the source, many calorie-conscious consumers today correlate healthy with “fresh.”

To DeBrosse, fresh means not frozen and not processed. Because Boudin SF established its roots as a bakery, the stores make their bread fresh every day.

Factor in the popularity of the Food Network and other food-themed television content, and consumers now have a more educated view of what fresh means. Nick Calias, chef at Brasserie JO, a classic French restaurant in Boston, observes diners who are more sophisticated today than ever when it comes to food. Many will indulge, he says, but more of them are choosing healthy.

Calias created a “Fitness Breakfast” that consists of coffee, tea or skim milk, granola with low-fat yogurt and fresh fruit or an egg-white omelet with vegetables and whole-wheat toast. It helps Brasserie JO counter the notion that French cuisine is fattening, and Calias says the restaurant sells as many fitness breakfasts as traditional breakfasts.

“People want to be healthier and live longer. Part of that is eating healthy by cutting out sugars, sodas and just eating fresh, local food,” he says. “Today, farmers markets are everywhere and you can get this stuff. As chefs, we owe it to our consumers to buy local.”

To stay fresh, chefs rely on seasonal ingredients. In the winter, they use hearty root vegetables; in spring and summer, transition to tomatoes and corn; and in the fall, look to pumpkin and butternut squash as healthy food sources.

At the three Harvest Seasonal Grill and Wine Bar locations in Pennsylvania, all managed by the Dave Magrogan Group, the menu promises to be “seasonally changing” and “under 500 calories.” Ingredients are sourced from 75 local farmers and there are 12 organic, local beers on tap.

“Although we allow for some indulgences, 90 percent of our menu is usually under 500 calories,” DMG founder Dave Magrogan says. “We never sauté in butter and deep frying isn’t even in our vocabulary.

“From the kitchen to the bar, organic items are sourced so that we can offer our guests a healthy alternative,” he continues. Those items include organic wines, flour, mushrooms and even cleaning products.

But going totally organic is difficult for small chains, especially in the fast-casual space. Therefore, Boudin SF is tackling the health trend by adding more leafy greens and introducing new items, such as a wild Pacific salmon salad.

It’s important to know when you can mix in new, healthier ingredients without losing much taste. For example, multigrain waffles often taste the same as traditional waffles, according to Brasserie JO’s Calias.

“Everyone has a preconceived notion that French food is so heavy, but ours isn’t,” Calias says. “If we put fresh olive oil over toasted barley couscous people are going to enjoy it and it’s healthy. Same with summer vegetables and an herb broth.”

Calias says creating a healthier menu is all about what chefs put in their food. “If you’re going to make a thick cream sauce there’s not much you can do,” he says, “but when you’re cooking fish you want to make sure you’re using citrus and acids, which are going to bring a lot of flavors out.”

Brasserie JO’s salmon Provencal is cooked with beurre fondue, a butter and water sauce to which Calias adds citrus and wine. A little sauce isn’t going to hurt you, he says, especially when drizzled over green beans and roasted tomatoes to make a “full dish without the fat.”

“Most of our menu is pretty light,” Calias notes. “We’re using less butter and less cream in everything. We try to be as conscious as possible with those things. Is this too much fat? If it’s a dessert, can we add applesauce instead of so much sugar?”

Similar to adding healthy ingredients, cutting out unnecessary ingredients often leads to fewer processed items and a healthier menu as well. At Boudin, the ingredients for the staple breads are kept simple: flower, water, salt and dough.

“Those are our roots and we try where we can to adhere to that,” DeBrosse says. “We have many menu items that have simple and straightforward ingredients.”

Get a grip on gluten

When it comes to altering your menu to serve guests with special diets, differentiating between the two is critical. But unfortunately, a lack of knowledge about gluten and celiac disease still permeates today’s kitchens.

“Our community is still getting sick,” says Beckee Moreland, a gluten-free consultant and member of the National Foundation for Celiac Awareness, herself diagnosed with celiac disease. “We still have a lot of confusion and part of that confusion has to do with the fact that many people in the foodservice world think gluten free is a fad, that you eat gluten free because it’s a diet and you’re trying to lose weight.

“It’s not a fad, it’s a medical necessity,” she continues. “If we have a server who doesn’t take it seriously, that can cause huge problems for us.”

Therefore, adapting your menu to accommodate gluten-free diets should be done extremely carefully. For some restaurateurs, it’s second nature. “That’s why it’s called hospitality; we want to take care of people’s needs,” Sandoval says. “Just because you might be allergic to gluten, that shouldn’t keep you from going to restaurants.”

For others, celiac disease is such a serious condition that it’s best to steer clear of offering gluten-free products altogether. For example, Boudin SF is a bakery at heart and therefore doesn’t feel comfortable guaranteeing any item is 100-percent gluten free.

“We do have menu items that are gluten free, but we don’t promote it or say it on the menu,” DeBrosse says. “There are bread crumbs throughout the line so it would be very difficult to guarantee there is no cross-contamination.”

Many restaurants struggle with the question of whether to emphasize their healthier food items by pointing them out on the menu. On one hand, labeling items as healthy may turn off many diners who assume they have less taste. On the other hand, research has shown calorie labels on menus have a positive effect on ordering behaviors and will lead diners to eat fewer calories. 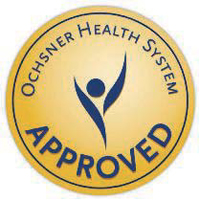 Restaurant owner Ti Martin falls clearly in the latter camp and has taken nutritional transparency in New Orleans to new heights. In addition to ensuring her restaurants offer healthy items, Martin has teamed with NOLA-based Ochsner Health System to support the Eat Fit NOLA program, which allows restaurants to add a nickel-sized stamp directly on the menu to items that meet dietary guidelines set forth by the American Heart Association. Martin has added stamps to menus at her three flagships—SoBou, Commander’s Place and Café Adelaide. These items must contain less than 600 calories and 800 mg of sodium, zero grams of trans fats, no refined starches and less than one teaspoon of added sugar.
A few dishes that are stamped at Martin’s restaurants:

Nick Calias’s kids will eat anything. That’s what happens when your dad has made a career out of cooking just about everything.

Calias, the chef at Brasserie JO, wanted to ensure his children would grow up making healthier food choices, so he started exposing them to different kinds of foods at an early age.

Now Calias is doing the same for your children. He just finished revamping the kids’ menu at Brasserie JO to make it healthier by including items such as turkey meatballs with pomodoro sauce. Instead of French fries, kids (or usually their parents) can choose from baked chips, apples in natural peanut butter or celery and carrot sticks.

“It makes us feel better as parents,” Calias says. “I don’t mind (kids choosing) a hamburger, but I like them having a side of fruit with it.”