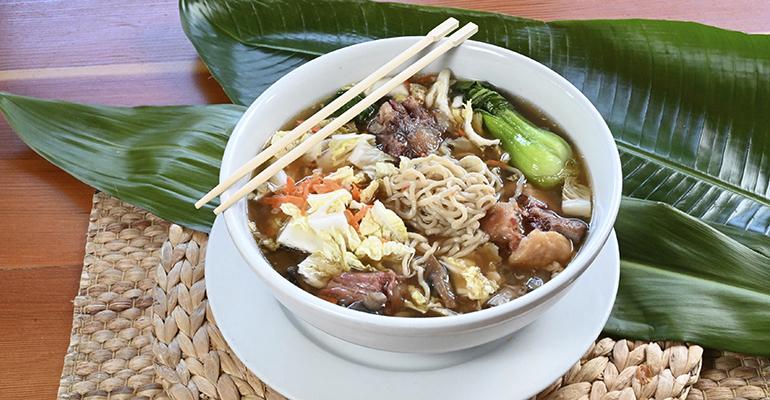 Year of the oxtail: Braise-friendly cut has broad appeal

The meat checks the boxes of low-waste, nose-to-tail and global cuisines

This past February 12 marked the start of the Lunar New Year; celebrated throughout China and other Asian countries, it ushered in the Year of the Ox. Chefs here in the United States needed little encouragement to consider the ox, since its tail has been a growing source of culinary inspiration for many of them.

Back in the day, oxtail lived up to its billing, which is to say that it actually came from oxen. Now it generally refers to the tail of beef or sometimes veal. Either way, it has received a triple boost from the waste not/want not, nose-to-tail movement, the growing recognition of African-American cuisine and its broad use in kitchens around the globe.

Southern comfort. A new generation of Black chefs is emerging to introduce classic dishes to a broader audience. In Seattle, lauded  restaurant JuneBaby pays homage to its roots with Southern soul-food favorites like Momma Jordan’s Oxtails with smoked shallots, turnips, rutabaga and smoked chard. The Peach Cobbler Café, which recently opened in Atlanta, brings soul food to the tony Buckhead neighborhood with features like Big Al’s Oxtail Dinner served over a bed of rice and gravy; side-dish options include black eyed peas, yams and cornbread.  And Brennan’s of Houston paid homage to the trend with a Southern Oxtails & Dumplings special, in which collard greens were topped with braised, pulled oxtail dumplings and finished with potlikker jus.

A prominent feature in Caribbean cuisines, oxtail is on the menu at St. Anne’s Restaurant & Bar in Los Angeles, which promises Southern twists and Latin spices and delivers with Braised Cuban Oxtail with cilantro rice and sour slaw cornichons. In Atlanta, the oxtail entrée at local favorite Chef Rob’s Caribbean Cafe is plated with rice and peas, fresh herbs and steamed vegetables.

Oxtails loom large in Filipino and Hawaiian cuisines as well, and King’s Hawaiian Bakery & Restaurant in L.A. steps up with an attractive Oxtail Saimin — saimin is Hawaii’s take on ramen — which puts the operation’s popular oxtail soup over wheat noodles freshly made in a dedicated saimin kitchen, along with baby bok choy, napa cabbage and carrots.

Global mashups. In Chinese astrology, the ox is characterized as reliable and hardworking, a reputation oxtail has been acquiring on menus. Chefs are riffing on its comforting qualities in myriad ways, as at Bar Amá in L.A., which taps into the sizzling hot birria trend. Here, Braised Oxtail Birria is put in homemade flour tortillas along with koch-kocha, a kind of Ethiopian salsa verde. Carson Kitchens reimagines comfort food in its three locations In Las Vegas, Salt Lake City and Atlanta, where Black Rice and Oxtail Risotto with Parmesan cream is a main-dish standard. Sunday brunchers can enjoy Oxtail Hash made with red-wine demiglace topped with a sunny-side-up egg. Speaking of brunch, KitchenCray, which launched its second location in Washington, D.C., last fall, has built a loyal following with options like Oxtail Benedict on a Southern biscuit. In addition, the opening menu also boasted an Oxtail Spring Roll served with mumbo sauce for dipping.

While the new Apt. 4B in Atlanta gets its name from the owner’s childhood home in New York City, the cosmopolitan menu ranges farther afield. Oxtail Hummus combines the conventional chickpeas with unconventional caramelized oxtail, and Oxtail Bucatini is made by slowly braising oxtail in Haitian spices and topping it with ribboned scallions.

On the opposite coast, the pandemic has forced chef Curtis Stone to shutter his Maude restaurant in Los Angeles, but it has been replaced with the casual pop-up Pie Room by Gwen. On the menu is Oxtail & Beef Cheek Suet Pie with pickled cipollini onions and horseradish gremolata.

Looking ahead, we’re likely to see the presence of oxtail expand on independent menus. Last fall, Datassential named it a protein trend to watch based on its growing presence at forward-looking operations. Its braise-friendly richness requires a little extra work, but many chefs are realizing a culinary reward.