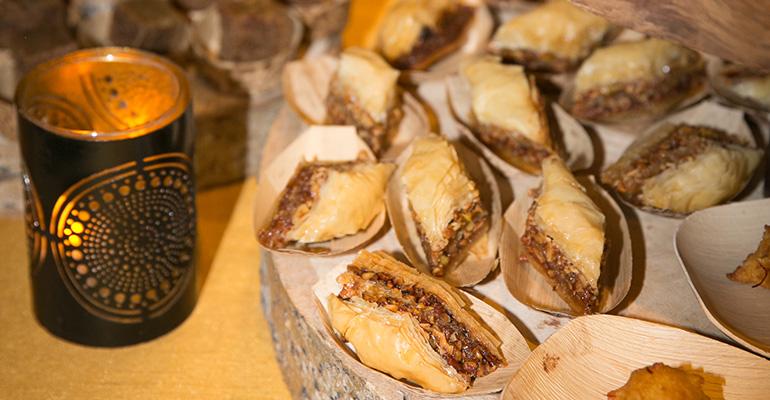 Sustainability and eclectic food on the menu in Aspen

This post is part of the Food Writer’s Diary blog.

The Food & Wine Classic in Aspen is not an event for the masses.

Hosted by Food & Wine magazine in a wealthy resort town in the Colorado Rockies, it’s costly to get there and expensive to stay, even without the $1,650 cost of admission. So it’s not surprising that the event tends to focus on celebrity chefs and luxurious foods.

But this year, between caviar hand shots (make a fist, balance a large dollop of caviar where your thumb and forefinger meet, eat the caviar and sip Champagne) and parties featuring magnums of wine selected by the nation’s best sommeliers, more universal issues were discussed. And the cuisine at some of the parties attached to the three-day event showed how far we’ve come from the days when European food and sushi dominated the high-end food scene. One discussion during the American Express Restaurant Trade Program focused on the changing culinary landscape, and that didn’t mean the goat tacos Stephanie Izard dished up at the American Express Platinum House — a mansion on edge of downtown Aspen reserved for premium card members. “Issues of environmental, economic and nutritional concerns around the globe have not just impacted Anya’s ranch, Ludo or Jonathan or Mike’s restaurants, or consumers,” Zimmern said. “It’s a much more global issue.”

Panelists discussed a sea change in the way they cook.

Sawyer opened Greenhouse Tavern in Cleveland nine years ago as Ohio’s first certified green restaurant, with the goal of doing what they could to make the world a better place “and give our children and grandchildren something better than our parents gave us,” he said. Lata, based in Charleston, S.C., reminded the operators in the audience that 15 years ago, restaurants, particularly on the East Coast, focused on importing premium ingredients such as Scottish prawns and Caspian Sea caviar. But he and many other chefs have since been drawing inspiration from local producers instead.

“You don’t really understand after a while cooking any other way,” Lata said.

Even the caviar hand shots were from domestic, sustainably raised sturgeon. Lefebvre advocated for chewier, more flavorful cuts of steak, such as those enjoyed in his native France.

Fernald was all for that, since she said the only way for her ranching practices to be economically sustainable was for meat beyond the precious 9 percent eaten as steak in the U.S. to be sold at a premium. That means more Americans need to appreciate skirt, hanger and flat iron steaks.

It’s unusual for these topics to come up in Aspen. Also unusual was the menu at the publisher’s party, on top of Aspen Mountain. Apart from the ice cream — a chocolate-and-marshmallow treat called “I Wanna Rocky Road All Night,” made for Food & Wine by Ample Hills Creamery of Brooklyn, N.Y. — the food, except for a couple of Indian-accented curries, was Middle Eastern. The beef shawarma with tzatziki was a highlight, but there was also hummus and babaganoush, stuffed grape leaves, tabbouleh, fatoush, baklava and date pudding with cardamom.

Yes, the party was called Dubai in the Sky, and was sponsored by Emirates airline, and was hosted by Iranian-born Food & Wine editor-in-chief Nilou Motamed (who is stepping down now that the magazine is moving its headquarters to Birmingham, Ala.), but the food wouldn’t have reflected that if it hadn’t also been completely on-trend. I think it’s a great sign of the times that food in this country, even at the most prestigious events, reflects a growing concern for the planet’s welfare and a cosmopolitan approach to what we eat, both of which were noticeably absent just 15 years ago.