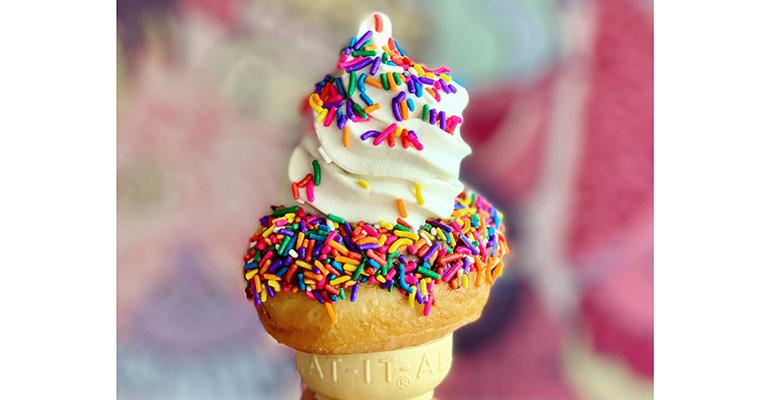 Pretty cones and striking flavors add to its appeal

In 1984, then-President Ronald Reagan anointed July as National Ice Cream Month and called on the citizenry to observe it with “appropriate ceremonies and activities.” Patriotic Americans have taken his directive to heart to the tune of about 23 pounds per capita of the frozen stuff, including regular hard ice cream, soft serve, low-fat and other icy delights, according to the International Dairy Foods Association. Our flavor choices, however, remain pretty unceremonious: Plain vanilla and chocolate are firmly entrenched as our favorites.

There has been experimentation with sexier flavors of regular ice cream: Moose tracks, in which vanilla ice cream is laced with fudge and peanut-butter cups, and chocolate-chip cookie dough also rank in the top 10, according to the IDFA. But much of the innovation is happening in the world of soft serve, whose sellers have tossed out the standard frozen-treats playbook in favor of more cutting-edge options. No longer the less glamourous, machine drawn cousin of ice cream, over the past few years, soft serve has become the jumping-off point for frozen flights of fancy that mirror larger culinary currents.

Asian tastes. Matcha, the green-tea powder lauded for its health benefits, has transitioned from the beverage menu to the soft-serve spigot, as at Matcha Cafe Maiko based in 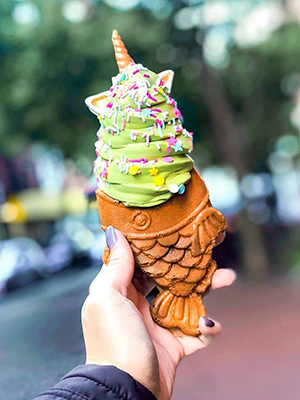 Honolulu, Hawaii. The 7-unit chain imports its ingredients from Japan to concoct specials like its Golden Shogun Matcha cone topped with gold. Dialing down the glimmer, the Maiko Special Parfait is made with matcha cream, matcha chiffon, chestnuts and shiratama mochi, or miniature rice cakes. Although matcha is the prevailing tea flavor of the moment, it’s getting competition from hojicha, in which the tea leaves are roasted to create a smoother flavor and pale brown hue, available in cones or cups at Momo Cafe in Atlanta. Thai tea, which is made with milk and sugar, is on offer at Twisted Love Artisan Soft Serve in Houston.

Vegan alternatives. In line with larger trends, soft serveries are responding to the demand for dairy-free desserts. In Los Angeles, Little Damage guarantees that one of its four seasonal flavors is vegan, like the current vegan cookie butter that coexists with regular coffee caramel, kiki and cream (Little Damage’s version of cookies and cream) and white chocolate offerings. Magpies Soft Serve creates a whole menu of vegan varieties like milk tea, vanilla bourbon, date shake, blueberry pie and flourless chocolate cake. The pièce de resistance, however, is the Fried Pie, which starts with corn-almond soft serve in graham cracker crust layered with vegan fudge and honeycomb and finished with nondairy whipped cream and fried cornflake streusel.

In Austin, Texas, Sweet Ritual is committed to providing a truly delicious dairy-free ice-cream-shop experience to the community, and a terrific case in point is the Cone-Nut. Available every Tuesday throughout the summer, a vegan donut is plopped atop a vanilla soft serve cone that is both tasty and instantly Instagrammable.

Instagram bait. Speaking of Instagram, cones have also been garnering tons of attention on the basis of their camera appeal. Take bubble waffle cones: Popular as street snacks in 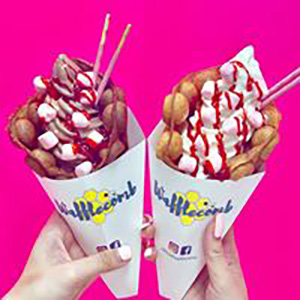 Hong Kong and Macau, the sweet cakes pocked with tiny spheres are catching on at spots like Wafflecomb, which is run in Santa Clarita, Calif., by natives of Canada. Chocolate or vanilla bubble cones can by filled with pineapple, matcha or cafe cream soft serve and garnished with unlimited toppings of all stripes. Fish-shaped Japanese Taiyaki cones are also having a moment. At eponymous Taiyaki in New York City, the Matcha Unicorn Taiyaki comes with traditional sweetened adzuki bean filling. Meanwhile back in Los Angeles, Little Damage boasts that its inky-black waffle cones are naturally colored with activated charcoal, hand rolled just before purchase and “made for the ’gram.” O