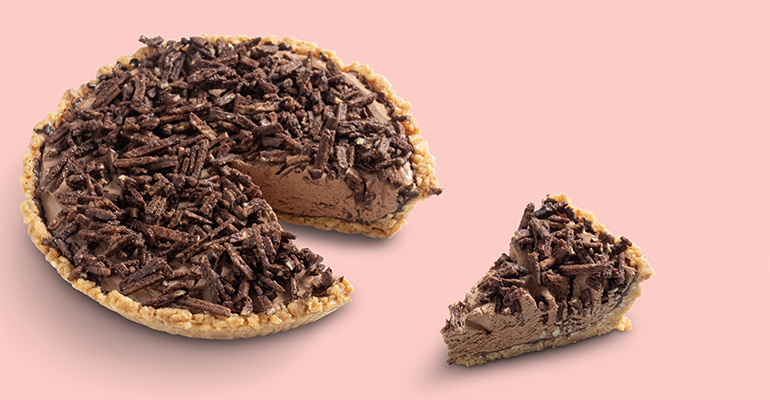 Robust flavors and cause marketing are the flavors of the season

Holidays are prime time for pies, and the dessert standards are getting an extra boost this season thanks to COVID-weary comfort-craving consumers and a new generation of bakers who are reinventing the classics and turning tradition on its head.

In Chicago, Pie Pie My Darling purveys “sweet treats for the misfit soul” in the form of vegan treats. Offerings include both standards, like apple crumble and maple pecan pie, and the unconventional, like chocolate peanut butter pretzel pie and Butterfinger pie topped with peanut butter drizzle and crushed vegan candy resembling Butterfingers. Also in Chicago, Spilt Milk Pastry touts its ingredients grown in the Midwest and promotes the local farmers who provide them for specials like blueberry rhubarb pie with streusel crumble.

Another Chicago venue, Justice of the Pies, is dedicated to positively impacting the lives of those who work for the operation while creating thoroughly modern selections like bleu cheese praline pear and chocolate bacon pies.

Two Fat Cats in Portland, Maine, bakes 47 different types of pie, including New England Bog Pie made with wild Maine blueberries and cranberries sprinkled with oat crumble and bits of bittersweet chocolate. In addition, the establishment runs Two Fat Cats Bakery Charitable Giving Program that supports local community organizations. Pie Pie My Darling and Justice of the Pies are similarly active in supporting social causes, and all of those shops are owned and operated by women.

While apple pie may be all-American, many new-age piemakers are looking beyond our shores for inspiration, as with Spilt Milk, which taps into one of the hottest trends of the moment with an horchata custard pie that delivers the taste of the popular Mexican rice-based beverage in a pie crust.

Four & Twenty Blackbirds in Brooklyn, N.Y., is run by a pair of sisters who together concoct sweet-and-savory combinations like their vivid green matcha custard pie, made with matcha imported from Japan, and the customer favorite Salty Honey Pie finished with flake sea salt. 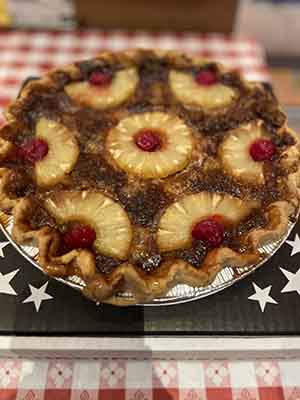 Other bakers give basics a boost, like the unexpected Bacon-Cayenne Pecan Pie at Bayou Bakery in Arlington, Va. or the Sweet Basil Key Lime Pie from Justice of the Pies. Dangerously Delicious Pies in Baltimore goes for the sweet spot with a fun Pineapple Right Side Up Pie, in which the Instagram-friendly pineapple rings with the requisite red cherries in the middle are artfully arranged across its top.

For sheer over-the-topness, Chicago’s Sugargoat is the one to beat. Affiliated with award-winning Girl & the Goat restaurant, a top seller here is the Chocolate Shake French Fry Pie, an homage to Wendy’s Frosty-and-fries combo, which starts with a crumbled French fry crust coated with a thin layer of dark chocolate that is filled with creamy chocolate malt and crowned with chocolate-covered fry crunchies. And for its customers who just can’t get too much of a good thing, the bakery also sells Renegade Cupcakes in flavors like Cheez It and Caramel Corn.

The history of chess pie is hazy, though James Beard’s American Cookery says that it is of English origin, and culinary historians suggest its name may be a derivation of cheese pie. In the South, where it is a staple, explanations of the nomenclature are quite different, and focus on its folksy simplicity, as in “it’s jes’ pie” or it’s made “with jes’ a little bit of this and jes’ a little bit of that.”

Regardless of its checkered past, the basic flour-sugar-butter-eggs mixture has become a jumping off point for contemporary takes like the lemon chess pie in a gluten free cornmeal crust at Pies by Gigi in Nashville, the blueberry chess pie at Justice of the Pies, as well as the portfolio of chess pie options at Dangerously Delicious that includes chocolate coconut and chocolate peanut butter.

A prime mover behind the current pie revival is doubtless New York City-based Milk Bar, whose Crack Pie, a reference to its addictive nature, garnered raves from the press and made waves with consumers. Ten years in, the name of the pie has been changed to the less politically charged Milk Bar Pie, though its signature gooey buttery filling remains the same. Pre-COVID, Milk Bar also cooked up Franken Pies that mix and match eight slices of varieties like Candy Bar, Grasshopper or Cinnamon Bun Pie in a single pie tin that allows patrons to have their pies and eat them, too.

Flavor of the Week: Lingonberry — Scandinavia’s answer to the cranberry
Dec 07, 2020