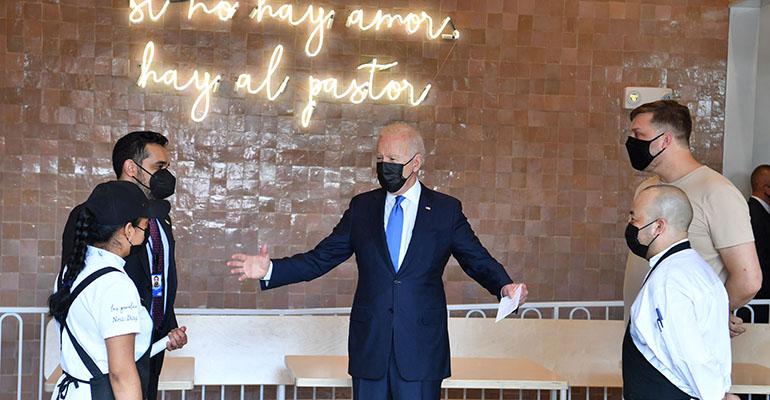 This Washington, D.C. taqueria received the first Restaurant Revitalization Fund grant: this was their experience

Washington, D.C.-based Las Gemelas taqueria was only open for two months when co-owner Josh Phillips applied for the Restaurant Revitalization Fund. Last week, Phillips learned the restaurant was the first to receive an RRF grant totalling about  $667,000.

Who told him? President Joe Biden.

Las Gemelas is co-owned by Phillips, along with hospitality director, Kelly White Phillips; Robert Aiken; Yesenia Neri Díaz,  head of the group’s masa processing team; and Rogelio Martinez, the company’s cook and butcher. The restaurant also has investors who are veterans of the U.S. military.

Josh Phillips is a general manager and partner in the Destination Unknown Restaurants group, which also operates Espita Mezcaleria in Washington, D.C. and Ghost Burger ghost kitchen, which opened during the pandemic.

Can you tell me about your background and Las Gemelas’ experience during the pandemic?

Las Gemelas was supposed to open last July. We signed leases in October 2019 and we were planning on starting construction towards the end of March last year and then the city closed down. At that point, all the funding we had collected disappeared and we were back to ground zero. […] We found other ways to fund the restaurant and it was one of the more challenging experiences in my life. We opened underfunded with no cash reserves. We were basically just able to cover construction.

What was your experience with the RRF?

When the Restaurant Revitalization Fund’s rules were finally published we were beyond ecstatic to see that new restaurants could participate. We had so far been just breaking even and it hadn’t been a profitable ride. But getting the Revitalization Fund was the light at the end of the tunnel. Like now we can retire some of the debt that we had to take on to get the restaurant open. […] It changed the whole game so we can actually open like a restaurant should.

When did you apply and had you applied for the Paycheck Protection Program?

Las Gemelas had not applied for PPP because we were not qualified. We were invited into the pilot program pretty late in the game, maybe four days before general registration opened to the general public. It was an efficient process and incredibly easy. It definitely took longer than the 20 minutes they quoted because I was not ready yet when I was invited to the pilot program. […] It took me probably two and a half hours to get all my stuff together. […] Once you're in the program, you can apply for any restaurant ownership statement. So, we’re glad we got both of them. But the ownership team of Espita are still in the queue.

When did you find out that you were the first restaurant in America to receive an RRF grant?

When President Biden told me! They originally told us that representatives from the SBA were coming by. I kept asking them, ‘does that mean that we were approved?’ And he said it’s just a push for the pilot program. So, then we had to provide a lot more documentation than was required by the program. […] For everybody else, you don't need to like prove your ownership structure, and we also needed to provide home addresses, phone numbers, birthdates for our operating partners. Then the day before they told us they were sending a delegation from the White House and I said, ‘it sounds like you did a background check.’ […]

The day of, we sit down, and [the SBA representative] says, ‘I'm sure you've noticed all the Secret Service agents in the neighborhood. The President is going to be joining us in a half hour.

What will you spend your grant on first?

We haven't received the cash yet. But we've already started to give some of our team raises, like bartenders and some servers. It was great to be able to do that with confidence. And that we have to pay off some of the debt it took to open the restaurant: I essentially had to drain the bank account of my other restaurant. We're also going to put some money into developing the patio further. Even though the city's opening up, my guests would still prefer to sit outside so expanding the outdoor offerings would be nicer.

Then of course, it will go toward rent and utilities and food costs. It’s definitely been insanely tight especially since staffing is a serious issue and the wages are astronomical compared to what they used to be.

Congress might be voting on $42 billion in restaurant relief this week
Apr 04, 2022