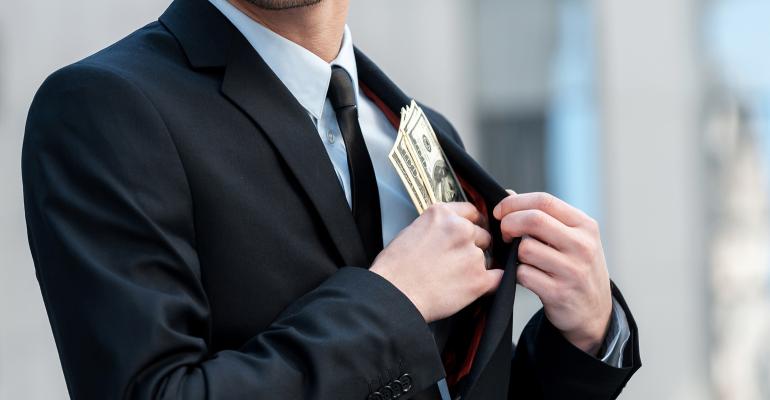 Recognizing the signs of embezzlement

How to deal with embezzlement before it gets out of hand

Can you afford to lose 5 percent of your revenue each year?

That’s how much money, on average, the typical organization loses annually to fraud, according to the Association of Certified Fraud Examiners, or ACFE.

Surprisingly, the majority of embezzlers don’t set out to steal from you, and most have never before committed a crime. Unfortunately, there are hundreds of ways to steal from a restaurant, and all it may take is a little push.

Most embezzlement cases can be traced back to what one expert calls the “Fraud Triangle.”

Donald Cressey, author of “Other People’s Money,” said three things must exist before someone commits fraud: pressure, opportunity and rationalization.

In other words, if someone feels pressured by a financial burden, sees an opportunity to take advantage of their position in the company to solve that financial issue, and is able to rationalize that they are owed the money and otherwise not a criminal, fraud can follow.

“As a restaurant manager, owner, and chef over the years, I’ve learned to look for the very clear signs that something suspect is going on,” said Michael Young, executive chef at Sheraton Kauai Resort in Kauai, Hawaii. “I’ve fired numerous people over the years for theft and embezzlement, the worst of which was five years ago when I realized the bar tills weren’t matching the inventory at the standalone bar I owned. I went through the dumpster and found proof of destroyed tickets and theft from a bartender that thought his needs were greater than mine.”

Unfortunately, restaurant embezzlement most frequently occurs in small independent restaurants where there’s a high-level of trust, according to Jay Kennedy, assistant professor of criminal justice at Michigan State University.

“Operators don’t want to believe that they’re being taken advantage of, and it’s rare that the employee came in to take them,” said Kennedy. “They’ve usually been there for a long time and they see an opportunity.” “If you suspect, something is going on, it probably is,” said Bruce Bronster, hospitality partner at law firm Windels Marx Lane & Mittendorf LLP in New York City.

“Things to look out for are uneven income flows, changes in patterns of income or net profits, and odd tipping patterns on credit cards,” he said. “Other unusual activity can include people who are adamant about working together or picking certain shifts, shipments paid for that aren’t delivered, and straight-out theft of product, cash, or drinks.”

Young added, “Looking for things such as stacks of quarters by a bar till and unmarked bottles in a bar break can signal that an employee is keeping track of money in the register.”

In the front-of-house, you may see smaller theft occur more often, according to Kennedy.

“There’s often skimming of the register, voiding of tickets, and wasting of food,” he said. “As you move to the back office, there’s a lot more opportunity to handle cash and receipts, create phony vendor companies, and use company cards for personal purchases.” To catch a thief

At the end of the day, the only way you’ll ever know if there’s a thief among the ranks is by performing regular checks and audits.

“The owner should have a firm hand on all activities, change shifts and responsibilities, and a firm hand on the cash and checkbook,” said Bronster. “Other recommended tactics include paid professional spotters, and, of course, security cameras, especially at the bar.”

Young agreed, adding, “It’s important to have a bookkeeper in charge of the everyday numbers and an accountant, preferable a CPA, to review the books. This provides a nice check and balance if the owner is not overly hands-on or proficient with numbers.”

Braden Perry, a regulatory and government investigations attorney with Kansas City, Mo.-based Kennyhertz Perry, LLC, said, “In order to identify potential white collar crime, a company must systematically look at each of the areas that most often cause problems and implement practices that are designed to avoid motivating individuals to prey on you.”

“Simply monitoring employees and ensuring a system of oversight will lessen the likelihood that a normally compliant employee will be tempted into a crime of opportunity,” Perry said. “Check cash drawers and audit tips regularly, indicating to the staff that management is overseeing accounting, and question any shortages immediately.

“Internally, food and liquor theft is also problematic,” said Perry. “Run a transparent inventory to ensure employees know you are tracking usage. Beware of employees wearing large coats or clothing out of season and suspicious behavior.”

“Be vigilant; it can come from any source or any direction,” he said. “It’s easy to look at the bookkeeper, but it can come from anywhere. Start by looking through the profit-and-loss statement every few weeks; it will show symptoms. And don’t have a set routine; show up to work randomly.”

Added Kennedy, “It’s important that owners always receive at least a copy of the financial statement to their home each month, and check it. Perform a random, regular, internal audit every couple of months and invest in a good external audit.” “It’s not worth it to call the police if the amount stolen is small,” said Young. “I just terminate them.”

Young’s response is not surprising, said Kennedy. Theft in the restaurant industry is common and often underreported.

“Most operators do not call the police or pursue civil charges for several reasons,” he said. “Many owners like the person and don’t want to ruin their life. They may have had a previous negative experience with police; and in many cases, there’s a minimum dollar threshold for reporting theft. It results in what has been coined in the industry a ‘cycle of passing the trash.’”

In fact, according to the latest fraud report from the ACFE, 40 percent of fraud victims decided not to refer their cases to law enforcement, with fear of bad publicity being the most-cited reason.

If and when you suspect one of your employees is stealing, your first instinct may be to confront them, but Kennedy suggested taking a step back and planning your next move carefully.

“The emotional impact of employee theft on a business owner is huge,” said Kennedy. “You feel victimized, angry, hurt and embarrassed. Have an outside representative, such as a CPA or attorney approach the employee about the fraud and give them opportunity for outs.”

Kennedy recommended using verbiage such as, “We’ve noticed that there are some anomalies in the financials. Can you walk me through this?”

If it is fraud, approaching them this way keeps them from going on the defensive and may bring up other improprieties.

Overall, practicing vigilance and consistency among your staff is the first step on the road toward a theft-free workplace.

“A company must be consistent. Treat everyone the same,” said Perry. “Don’t allow biases or alliances to shape the way you implement or monitor the fraud-monitoring program. Being non-tolerant of questionable actions can provide the consistency necessary to protect the business.”