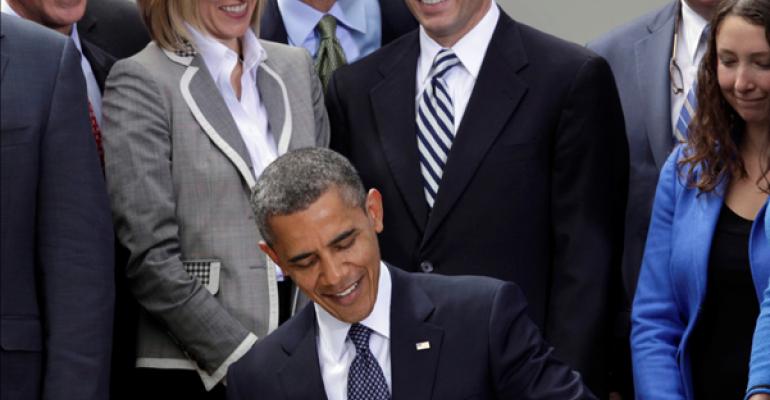 The Jumpstart Our Business Startup Act gives operators a way to fund their restaurant’s startup or growth by selling shares of it online.

Can’t find money to start or expand your operation? Good news. A federal law now makes it easier for small businesses like restaurants to raise funds via Internet-based crowdfunding sites. You can get up to $1 million under this law, which is already on the books and should be fully implemented by early next year.

President Obama signed the JumpStart Our Business Startup Act into law in late April. The awkwardly named act—better known by its we-dare-you-to-vote-against-it acronym, JOBS—is designed to help small businesses create new jobs by making it easier for them to raise money. Funds should start flowing in early 2013, after the Securities and Exchange Commission (SEC) has had a chance to fine tune rules necessary to make the JOBS act work as planned.

The big deal here is that companies like restaurants are now able to sell shares of their businesses via online crowdsourcing intermediaries without having to file the usual registration documents with the SEC.

If you want to borrow more than $500,000, all you have to produce is an audited financial statement. Those seeking amounts between $100,000 and $500,000 must supply financial statements that have been reviewed (but not audited) by a CPA.

Ask for less than $100,000 and the only requirement is that the company’s executive officer must certify that the business’s financial statements are correct and true. Which is to say, investors have to take your word for it. It’s not the same as those “no documentation” loans (i.e., “liar loans”) that helped fuel the recent real estate bubble and the subsequent housing market crash. But consumer advocates are still worried about how the JOBS bill lending will play out in the real world.

These experts acknowledge that JOBS creates a huge opportunity for cash-thirsty businesses like restaurants. But what about the investors who’ll be putting up the money? Consumer guardians fear that fraud and scams would result because of the minimal financial vetting borrowers will undergo.

Where will you go to get the money? Online. For example, a crowdfunding portal like www.SoMoLend.com, which already secures loans for businesses that can’t currently get regular bank funding, is ready to put the JOBS act to work once the final provisions are in place. “Soon you will be able to use SoMo to secure loans from your friends and family, customers, local supporters and social media connections,” the company promises.

We’ll find out soon how well the crowdsourcing provision of the JOBS Act works for restaurant owners. Just remember this isn’t the same as crowdfunding site www.kickstarter.com, where restaurants typically barter food and drink items that will be collected in the future in exchange for cash today. Under the JOBS program, you exchange an ownership position in your business for cash today.

There’s little doubt the Jobs Act’s crowdsourcing provisions has the potential to become a valuable financial tool for many restaurant operators. Just be careful what you sign up for.