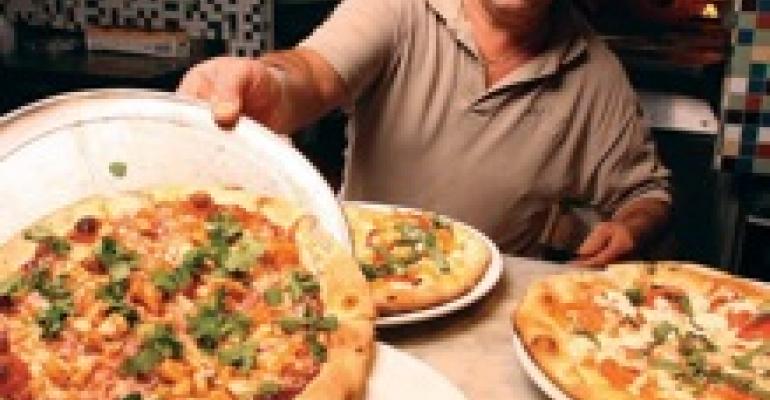 Stoke Up the Brixx

You can't miss the giant, flaming woodburning oven when you walk in. It's this restaurant's signature, the mechanism behind the menu, the brick behind the "Brixx." But it's not the oven—it's the fire. The passion. The nonstop energy of the manager, servers, cooks…and yes, the customers…that makes Brixx Wood-Fired Pizza a concept to watch.

The passion begins with managing partners Jeff Van Dyke and Eric Horsley. These two have been doing foodservice together for 25 years and have been involved in a number of successful concepts, but there's something special about Brixx—something that lights up their eyes and vitalizes their conversation.

"If you can measure the success of your concept by how much you enjoy it, then we're succeeding in a big way already," says Horsley. "You have to love this place; it's just fun. The customers love it, the employees love it, and guess who's asking to franchise the concept? People who eat here. They feel the energy, and see that it's contagious. Who wouldn't want to be part of that?"

Not ones to be selfish, Van Dyke, Horsley, controller and operating partner Barbara Morgan and the five other Brixx partners have decided to invite these enthusiastic others in. They recently enlisted the help of Neil Newcomb, one of the founders of McAlister's Deli, to help them create and operate Brixx Franchise Systems. With nine company-owned units in North and South Carolina and a nine-year track record of success with the concept, they are ready to take it national.

"I've done a lot of looking, and I can't think of another concept that would be as compelling to a franchisee as Brixx," asserts Newcomb, who helped grow McAlister's beyond the 200-unit mark. "The popularity is very important, of course, but when you look at the operating efficiencies, this concept is nothing short of amazing. Jeff and Eric took the best of their past experiences and came up with a concept that can do $2 million in a 3,400square-foot space. Factor in the cost of goods at around 22 percent, and you can see how profitable one of these stores can be."

Efficiency and ease of operation were two of the main considerations of Van Dyke, Horsley and Morgan as they developed the concept. Their intent is to keep everything simple, from menu (details coming next) to equipment (the wood-fired stove and a six-burner saut? station pretty much cover it)—right down to the glassware (one glass for beer, water, iced tea and soda; another for wine).

"We worked to eliminate the complexities and headaches so many other concepts create," says Van Dyke. "Brixx is easy to manage: We can deliver a fresh, hand-crafted product in the time it takes some other concepts to reheat, and we can turn tables in 45 minutes. We've resisted the urge to expand our menu many times because we want to stay true to our philosophy of keeping it simple."

What's to Eat?
The menu at Brixx is what Van Dyke describes as "kind of an upscale, healthy menu. We focus on pizza, which accounts for probably 60 percent of our food sales, but we also sell a lot of appetizers, salads, sandwiches and pasta. In fact, one of our signature items is the Brixx Salad—mixed greens, pine nuts and goat cheese tossed with balsamic vinaigrette. Our average store sells 3,000 of them a month." Customers go for the Wood-Roasted Chicken and Salmon Salads as well.

As for the pizza, well, let your imagination run free. In addition to the baker's dozen that appear on the menu daily (Roasted Chicken, Mexican, Quattro Fromaggio and Artichoke, to name a few), chefs and managers have the freedom to create their own pizza specials each day. Each of them begins with the customer- and time-tested thin crust Brixx has become known for, but what happens after that is up to the creative inspirations of those in charge.

"We don't change the menu a lot," says Van Dyke, who explains that keeping service fast and product consistent means you're not constantly switching gears on your employees.

About the Beverage Program…
Beverages are a huge part of the Brixx concept. With 24 microbrews on tap and 16 wines by the glass, plus a full bar, Brixx hasn't met a thirst it can't quench. The beverage program is designed to complement the menu and satisfy the tastes of the diverse clientele.

"We change our beverage selections fairly often, in part to add interest for our regulars and in part to leverage special values provided by distributors," explains Horsley. "We change a couple of beers every month and wines at least once a quarter."

Bright Colors, Boundless Energy
The design of Brixx is all about positive energy. Vibrant colors surrounding the focal wood-burning oven create a lively feel; natural lighting and materials like marble and granite reinforce the casual-yet-upscale feel of the place.

Big booths are popular with guests, so every Brixx has at least a half-dozen of them, accommodating six to eight diners each. Tables round out the seating options indoors and on the patio, with average seating for 120 indoors and 50 outside. The bar provides an additional 15 to 20 seats.

Charlotte-based Robert Johnson Architects designed most of the existing Brixx stores, and the firm will be available as designers and consultants to franchisees, ensuring that the energizing elements remain consistent in new units.

Who's Hitting the Brixx?
They say you can't be everything to everybody, but Horsley, Van Dyke, Morgan and team strive to come darn close. As Horsley puts it, "Mom can have a great salad and a glass of wine, Dad can have pizza and a cold beer and the kids can enjoy their own special menu while playing with their pizza dough. For the dating crowd and employees of other establishments that are open late, we offer service until 1 a.m."

As one might suspect, the crowd varies by daypart, with significant business traffic at lunchtime, a slew of families at dinnertime and couples and singles later in the evening. Brixx also has a loyal following of regulars, some of whom visit so frequently their names are laminated on the bar.

That loyalty, and the burgeoning word-of-mouth support Brixx gets, saves a lot of advertising dollars. Van Dyke says advertising accounts for less than 2 percent of the budget. The chain does advertise when opening in new markets, but for the most part, the stores count on their clientele to spread the word. "Making sure no one leaves here unhappy is our best means of marketing," he says.

Families certainly don't leave unhappy, because they always get an extra measure of TLC at Brixx. Servers are specifically trained to be kid-friendly, so they never put hot food in front of children, offer them only caffeine-free drinks (with lids!) and present children with their own blobs of pizza dough when they sit down, to occupy them until their food arrives. An extra treat for children at the Uptown Charlotte location is Creation Station, where every Sunday, they have the opportunity to make their own pizza.

Other means of attracting traffic include the specials Brixx promotes through its website and in the restaurants: $1.50 microbrews on Mondays, 2-for-1 pizzas and appetizers at Wednesday's Late-Night Happy Hour, $2.50 imports on Thursdays and half-price bottles of wine on Sundays. And the Brixx Take-Away Dinner Card is great for encouraging repeat business.

What Makes Brixx Brixx
Now for the intangible: What differentiates Brixx from California Pizza Oven, local pizza joints and the host of other casual establishments surrounding them? Without hesitation, Van Dyke, Horsley and Newcomb cite their people.

"Our food is consistently good—fun and interesting, and we use the best ingredients. But honestly, it's more about the people than the food," says Van Dyke. "We are very careful whom we hire, because we know that you can train people to serve tables but you can't train them to care about people. That comes from within, and it's essential to every employee who works with us."

Newcomb says that employee loyalty was one of the things that drew him to Brixx. "Eric, Jeff and Barbara have managers and crew members working for them who have been there since the concept began nine years ago," he says. "Some of the employees came with them from other concepts. When you see that kind of loyalty from managers and employees, you know something good is going on in that company."

That good thing seems to be mutual respect. In addition to benefits and reasonable working hours (Van Dyke says their managers put in about 45 hours a week), the management team values suggestions and ideas from their employees and emphasizes that everyone is in this together, working for the customer.

"We ask everyone for input into the development of our company, menu and procedures so that we can keep improving Brixx for our customers," says Horsley. "We also take our teams outside of their stores to join in charitable community causes. We know we're making a difference inside and outside of the restaurant, and that gives us all a real sense of belonging."

And that is an advantage franchisees can't put a price tag on. If they can instill the same sense of ownership in their own crews, their operations will be Brixx solid.