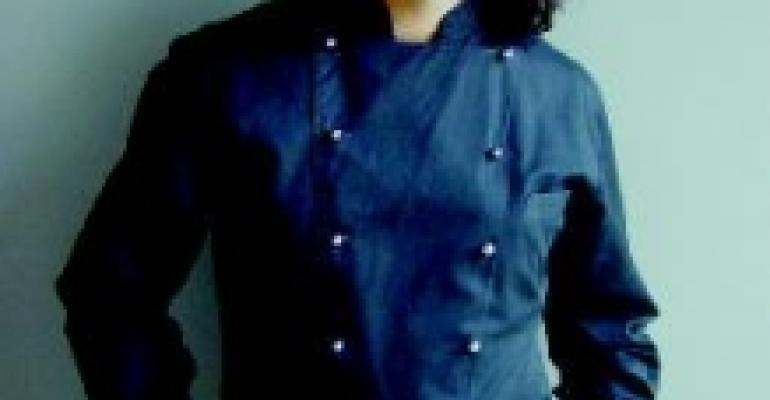 After making a name for himself in Las Vegas, Kerry Simon, with partner Elizabeth Blau, is ready to take on Los Angeles.

Kerry Simon is ready to rock! Named the "Rock and Roll Chef" by no less than Rolling Stone, the guitar-playing Simon and his partner, restaurant consultant Elizabeth Blau, recently opened their second restaurant, Simon L.A., at the Sofitel Los Angeles. Simon's boyish good looks, creative mastery and adventurous spirit make him the star in his "theatre of cuisine" at the showcase dining room designed by Yabu Pushelberg of Toronto.

RH: Why did you choose to open in Los Angeles?
Blau: Las Vegas is "a big little, small town." Los Angeles is a major metropolitan city. In LA there is access to such unbelievable produce and organics. Las Vegas doesn't have that agriculture. Since Kerry's food is so product driven, I think it's going to bring the food to an exciting new level.
Simon: What the Sofitel offered worked for me. I like their support systems.

RH: L.A. has a lot of good restaurants, both casual and fine. What do you think Los Angeles wants from you?
Blau: Most of our market in Las Vegas comes from Los Angeles. So we've already been exposed to the market. We are comfortable that we do something that people in L.A. want.

RH: Do you think that L.A., more than other areas of the country, welcomes "edgier" restaurants?
Blau: I think the people of Los Angeles are willing to try things. It's easier to come here and experiment.

RH: Now you are involved with three hotel companies: the Hard Rock Las Vegas, Sofitel Los Angeles and in the fall, the Marriott Maui, run by Blackstone; each has its own corporate culture. How do you handle that?
Simon: I never had a problem with that. Each place is run differently. You just make sure you follow their rules!

RH: The menu at Simon LA includes many healthy options not found on the Las Vegas menu: White Corn Chowder; a "fully loaded" burger with organic turkey, avocado, sprouts and cranberry relish; protein drinks, smoothies and house-made granola for breakfast.
Simon: For me it is normal. That is the way I eat. The food will be as organic as possible and include more raw foods and seafood.

RH: The long hours on your feet and the intense pressure in the kitchen can wear anyone down. How do you keep fit?
Simon: I run. I lift weights. I do yoga and meditate. I used to rock climb, but haven't for a couple of years.

RH: Where do you find the time to fit in all these activities?
Simon: First thing in the morning, I run. At some point, during the day at the restaurant, I take a break and go to the gym.

RH: Will you live in L.A. or divide your time between L.A. and Las Vegas?
Simon: I always wanted to live in L.A. and will live there most of the time. I'll be back and forth. When we open Maui, I'll take that on. I'm here now. I don't really know. I haven't processed that part of it yet.

RH: When you were chef at the Edwardian Room of the Plaza Hotel, you revived the chef's table. Has this continued in Vegas and L.A.?
Simon: What I did, instead, was open up the kitchen, so that I'm right in front. Basically, everybody has a table in the kitchen. It's like cooking for 160 friends each night. I'm interacting with everyone. I see everyone's reaction. I know right away if you are having a good experience.

RH: You have opened numerous acclaimed restaurants. At Max's in Miami, you originated the comfort food movement. Why did you leave, since you were so well-received?
Simon: I made a lot of mistakes to get where I am today. Max's was a very young, bad business deal. I was naïve. I didn't know I needed a lawyer to look at a contract. I based my dealings on trust alone and I paid for this lack of expertise. I made the hard decision to leave, which changed my life.

RH: How exactly did it change your life?
Simon: I started working for Jean-Georges Vongerichten. He was my best friend and we were like brothers. I realized, after my mistakes in Miami, I had to look at every aspect of what we were doing to be certain it was accurate. I never wanted us to get caught up in anything wrong for him. Literally, right after having the bad deal with Max's, I flew to Hong Kong with Jean-Georges and met with The Mandarin to sell our concept to them. The next thing I knew, I was on a plane for seven years. I was handling contractual things, development.

"I based my dealings on trust alone and I paid for this lack of expertise."—Kerry Simon

RH: Were there any other big turning points in your life?
Simon: One day when I was working for Jean-Georges, I felt I had to make a decision. I was either going to go off on my own or stay working for him. I had a very nice life. I was well-paid. I was flying all over the world, putting together projects and doing research for him. But I wasn'tsatisfied. There was something inside me that said I must gamble and be on my own. Taking this chance was very hard.

RH: How do you feel now that you have opened your second owner/partner restaurant?
Simon: We're just starting, so it's nerve wracking. I always feel my head is on the cutting board. You want to have a "secure existence," but in our business, it can be transient. You are trying to form something that gives you some stability.

RH: Now that you are in L.A., if one of your many film industry patrons asked you to be in a movie, would you do it?
Simon: Of course! I love new challenges. I like having fun.