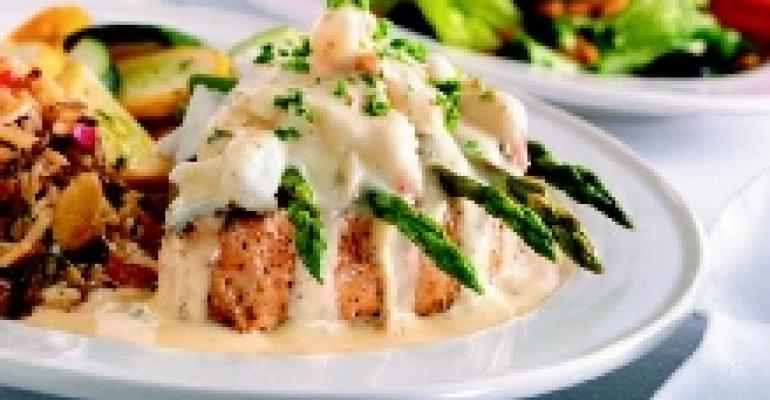 Good companies, no matter how well they are built, must rely on customers for long-term success. Are your customers dining out as much as they did before? Are their household incomes under pressure? Are gas prices playing a role in their eating-out decisions? Despite factors like these and others, the best growth chains manage to fill their stores daily while building new units at an impressive pace. Bob Derrington of Morgan Keegan & Company has compiled a list of 10 powerhouse chains that posted among the highest company-wide sales and unit growth rates in the industry.

Bonefish
When it comes to the big boy growth chains (those with sales over $100 million), Bonefish surfed to the top of the wave. Its sales were up a whopping 67 percent to a system-wide $235 million. At the same time, its unit development grew by 44 percent. That put Bonefish at 90 units by year's end.

Bonefish, says Derrington, tapped into a market sweet spot, seafood, which is experiencing a surge of popularity with baby boomers who perceive seafood as healthful compared to other proteins. With its check averages in the low $20 range, Bonefish attracts families with higher incomes and more sophisticated palates, relative to the mainstream dining public. Derrington calls this concept niche "polished casual," which is less affected by higher gas prices.

This upper seafood market occupied by Bonefish distanced it from seafood concepts that aim lower, such as Red Lobster and Joe's Crabshack, whose customer base is more sensitive to economic highs and lows.

Potbelly's trade dress also is exceptional, says Derrington, pointing out that its drugstore motif, wood floors and stylishly casual dècor offer customers something beyond what you might expect from a sandwich concept with check averages of $5.

"The sandwich segment is real hot right now," he says. "It has had some of the highest growth, which is no surprise in a tougher economic environment." Good quality food at reasonable price points in a comfortable setting is a hard combination to beat.

Moe's Southwest Grill
Over the last year, this fast-casual burrito concept grew sales by 52 percent to $184 million. Its unit count also grew to 266 stores, which represents a 33 percent increase. Moe's, which is the flagship concept for Raving Brands, also proved that during a tight economy, customers will flock to operations that offer quality, value and speed of service.

Moe's is one of two concepts on this year's list that occupy the hot fast-casual Mexican category. Like Chipotle Mexican Grill, it offers high-quality, generous portions that are prepared on-site. Check averages are around $7.

"This category has really connected with the public, particularly younger kids who like a casual setting, easy price points and large portions of good food," says Derrington. "Moe's, which is about six years old, has it all, which makes it one of the strongest players in fast-casual Mexican."

Beef O'Brady's
This 20-year-old concept began in Tampa and has grown into a Southeast regional chain of family-style sports pubs. Last year its sales were up by 41 percent to $180 million. Its portfolio of stores grew to 190, which represents 21 percent unit growth.

The strength of Beef O'Brady's is that it strives to be a family-friendly neighborhood bar with good, solid pub fare. Half-pound burgers, chicken wings, sandwiches, wraps, salads and similar casual fare attract families, as does its $10 check average. The concept, wherever it's located, gets involved with the local community, primarily by sponsoring sports organizations. This connection helps build customer loyalty.

"Here's a low-cost, neighborhood restaurant with reasonable price points and an approachable menu," says Derrington. Its average unit sales are about $1 million, which is about what it costs to put up a unit of Beef O'Brady's. There is nothing sophisticated about its approach, but it works."

Smokey Bones BBQ & Grill
This Darden concept, which is now seven years old, had an impressive 2005, with a growth rate of 41 percent, which made it a $310 million company with 117 units. Despite its success, Smokey Bones is the concept on this list most in search of itself. Designed as a neighborhood rib joint and sports bar, the brand has found that a barbecue menu does not attract frequent diners as much as other concepts.

"The concept is morphing into a sports bar with better quality food," says Derrington. "It is de-emphasizing its focus on barbecue to broaden its menu and attract more consumers. There's even talk about changing the name."

Nevertheless, average Smokey Bones unit sales are around $3 million. Its same-store sales are down nearly 9 percent this year, which suggests more changes are on the way. The addition of salads, sandwiches and steaks may attract a broader market, but that remains to be seen.

Pei Wei Asian Diner
It wasn't long ago that the buzz of the industry was all about P.F. Chang's China Bistro, which changed America's perception of Chinese food. From that success came a more casual spin-off, Pei Wei Asian Diner, which now is grabbing the spotlight. It's no wonder: Sales last year grew by 40 percent to $133 million. Its operating units increased by 45 percent to 77 restaurants.

Pei Wei's secret is its broader appeal to those who like Asian food. While its bigger sister's focus is on Chinese food, Pei Wei offers a variety of Asian-style foods that skew toward Asian fusion. This it does with average checks of $9, about half the price you'd pay at P.F. Chang's. And the food quality, many say, is every bit as good as you'll find at its more expensive sibling.

"The company plans to grow Pei Wei at a 20 percent rate, which will put it on a growth schedule of twice that of P.F. Chang's," says Derrington. "With average unit sales of $2 million, this concept is a winner."

Johnny Carino's
Johnny Carino's, which is operated by Fired Up, Inc., is a full-service concept featuring a family-style Southern Italian menu. Last year it became a $385-million company based on sales growth of 40 percent. Its unit count grew by 24 percent to 167 stores.

Check averages, for a menu that features items such as lasagna, pizza, pot roast, baked cheese tortelloni and spicy Romano chicken, are about $11. Portions are huge, which makes this an ideal setting for families. Stores feature framed family pictures, wood and stone walls, mismatched chairs and small dining rooms.

"Average unit sales at Johnny Carino's are around $2.5 million, but the chain is not getting the returns it would like," says Derrington. "The cost of building a unit is high, which may threaten its appearance on next year's list of growth chains."

BJ's Restaurants
This brewpub concept, which operates under the names BJ's Brewery and BJ's Brewhouse, features an inhouse microbrewery and a 100-plus item menu with deep-dish pizza, sandwiches, salads and soups served in an upscale brewery environment of 7,500 square feet.

Sales at BJ's were up 39 percent, making this a $181-million company. Based in Hungtington Beach, CA, its unit count rose to 45, which represents a 22 percent increase over the previous year.

"This is a nice brewpub concept that has an upscale feel about it, in part due to its larger-size footprint and attractive finishes," says Derrington. "Its combination of craft beers and deep dish pizza make this a concept to keep your eye on."

Chipotle Mexican Grill
For years, Chipotle has been the darling of financial analysts, and that's not soon to change. Its sales grew to $640 million, an impressive 33 percent increase. At the same time, its unit count increased by 22 percent, ending last year with 489 restaurants. By most accounts, Chipotle is the strongest player in the fast-casual arena.

Concept creator Steve Ells, winner of RESTAURANT HOSPITALITY'S Richard Melman Concepts of Tomorrow Award, partnered with McDonald's, which gave him the capital to grow the company at its impressive rate. But in January, the concept went public and McDonald's recently announced it would sell off a large interest in Chipotle to focus on its core brand.

"McDonald's sold off about 33 percent of its interest in the chain, yet the concept has great prospects for future growth and its dominance of the fast-casual segment is assured based on Steve Ells, philosophy of 'food with integrity,'" says Derrington.

Buffalo Wild Wings Grill & Bar
Here's a concept that found its growth through diversification. Originally built on the strength of its New York-style chicken wings, it has morphed over the years into a full-scale sports bar with a full menu that offers appetizers, salads, burgers and more. Its wider appeal has led to a system-wide sales increase of 29 percent, or $665 million. Unit growth was also up—21 percent— which resulted in 370 total restaurants.

Check averages for this Minneapolis-based concept, which began in Columbus, OH, are around $10. Average unit sales come in around the $2 million mark.

"Buffalo Wild Wings proved that you can generate impressive profits on the lower-end of the market," says Derrington. "It also demonstrated that to grow in the business you often have to continually make changes to a market that is constantly moving."