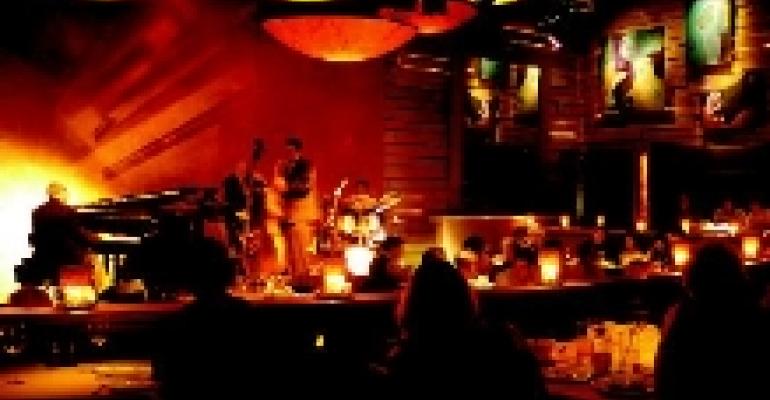 RH: In some areas of Southern California, there is a gold rush to open the first, the most, the trendiest. The Smith Brothers open carefully and deliberately. You have your own pace.
Bob: We've done frenetic. We started rolling out Crocodiles in five states in the early '90s. It's hard, if you ramp up too quickly, to maintain the quality. It stopped being fun. We look for a need in the marketplace and then we like to create something new, one of a kind.

RH: If diners linger while listening to the music, how do you manage to serve enough meals?
Greg: We have 140 seats. The problem is getting our tables turned so we can handle our reservations. Sometimes we signal the entertainer to take an additional break.

RH: With the revitalization of Old Town, Pasadena has become a popular place to open a restaurant. But you began a decade before this was the place to be. Why?
Greg: We've spent our whole lives here. People know us, we know them.

RH: And yet, you opened Vibrato, 22 miles away in Bel-Air, a community and culture far removed from your comfort zone.
Bob: We were approached by Herb Alpert and his partners. The project had already started and needed an operator. It's a challenging, nontourist location. The venue is a unique mix of both high-quality music and food.

RH: Vibrato has exceptional acoustics that allow the diner to have a conversation and, at the same time, hear the jazz perfectly.
Bob: Nothing was spared to try to achieve this. The acoustics were guided by Herb's acoustical engineer and architect, who designed studio B at A & M Records. The interior design was by Clodagh.

RH: Recently the Los Angeles Times stated that 15 "ambitious" restaurants have closed within two months for various reasons: partners separating, concepts not working, mediocre food, rising costs, traffic and a soft economy. Why have your restaurants survived and flourished?
Bob: We started Parkway Grill 21 years ago. That's a long life cycle here. Our large customer base gives us an advantage. If we open a new concept and something is not right, they tell us.

Greg: We try not to get so trendy that it's out of date in a few years. If people walk in and say, "Oh, remember when this was hip?" That's death!

Bob: All our locations are at the site of previously failed restaurants. We can acquire assets at that rate relatively inexpensively. Development costs are $350-$400 a square foot, so we always take over a developed space.

Greg: When we first opened Reflections in 1974, the three-city area of Pasadena, La Canada and Glendale had 600,000 people and six upscale restaurants. Owners used to say, "if you alienate a guest, you won't see them again for six months." These days, you would never see them again! Now in Pasadena alone, there are 700 licensed food establishments, including markets and fast food. You are not just in competition with the best mom and pops any more. You are battling huge companies that are very good at what they do. They can come in and wipe you out if you are not on top of things. You need to be sure that you are positioning your concept correctly, that you are differentiating your offerings. The bar keeps getting raised: every year, every six months, someone takes it to a new level.

RH: A good example of how you have survived is the transformation of your Ducz Restaurant to Smitty's. Instead of going down with a sinking ship, you regrouped in two weeks.
Bob: We started tracking the sales of Ducz from its December 2000 opening and noticed that it took off like our other restaurants. Then, in summer, it had a down trend. We created plan B: If the trend doesn't reverse by September, we will have everything in place to close and reopen within two weeks! Planning began on a new concept five months before we changed. Our designs were done, our materials ready, we talked with contractors and planned the menu. Then 9/11 happened, and people were concerned about security, wanted comfort food, were not as interested in upscale restaurants. Our chef left. Ducz closed the night before Thanksgiving Day and Smitty's opened the 7th of December. We changed the look, the name, made a new menu, hired a new chef and line cooks.

We look at our restaurants first as a business and park the ego.

RH: Could you explain your House of Yes concept?
Greg: Always find a way to say "yes." If we say no, we lose, because our competitors will say yes. We empower our staff to accommodate special requests. One night, after the Grammys, celebrities jammed Parkway. A star's manager said, "There are 16 of us instead of the 12 reserved." I said, "It's impossible." A waiter whispered in my ear, "Remember, we are the House of Yes!" So I said to the manager, "I'm sure we can take care of you."

Bob: A good customer came in one night and wanted french fries; we were not set up to make them. A server took money out of her wallet and sent the busboy to buy some.

Greg: During dinner, a customer realized they had forgotten tickets to the theatre. We called the box office and it was handled.

RH: Community involvement is obviously important to you. How do you choose the many charities you support?
Bob: When Parkway opened, we asked our guests, "What is the most important thing in Pasadena?" The answer: the Huntington Hospital.

Greg: We look at need and the demographics of our supporters, then select concerns that are not controversial such as hospitals and children. The Food and Wine Festival, which we started 21 years ago, has raised a total of $1.8 million for the Huntington Hospital.

RH: What's your secret for getting along as partners?
Bob: Respect what each person brings to the party. Always leave room for negotiations. Talk about a problem and try to come up with a compromise.

Greg: I think it is learned. I used to be more volatile.

Bob: I remember a pie on the wall!

Greg: You sort of learn what works and what doesn't.

RH: But not everyone learns.
Bob: If you don't learn, you probably won't be successful. I've been an advisor to small companies and watched the owner refuse to hire someone who was smarter than he was, because he felt it would demean his leadership.

Greg: GE's Jack Welch said he wanted to be the dumbest guy in the room.

Bob: Hopefully you know enough to keep your company from going out of business.