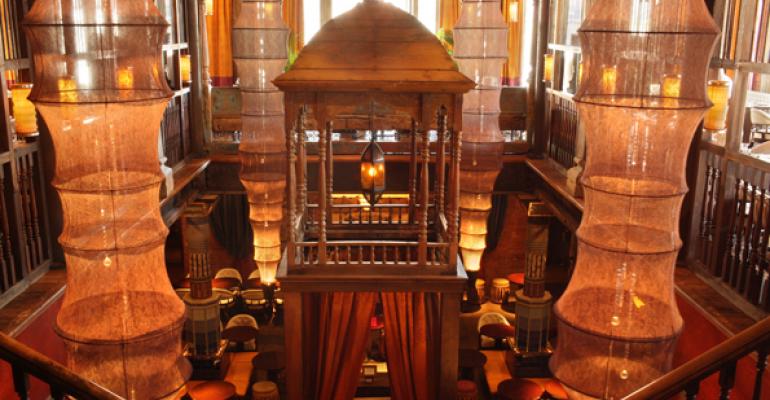 <p>The massive temple to Southeast Asia opened a decade ago in one of Manhattan&rsquo;s seediest neighborhoods.</p>
People>Owners

Phil Suarez says his friends told him to buy a boat rather than invest in a play, but the brash New Yorker has never been afraid of taking chances. The longtime restaurateur ponied up for a piece of Kinky Boots and the Broadway hit he coproduced went on to win a Tony for best musical last year. But his biggest success story still has to rank as Spice Market, the massive 18,000 square-foot temple to Southeast Asia he and Jean-Georges Vongerichten opened a decade ago in one of Manhattan’s seediest neighborhoods.

Spice Market helped transform the Meatpacking District into one of the city’s hippest, and for 10 years the restaurant has been transporting diners to magical faraway places like Saigon, Bangkok and Kuala Lumpur. Spice Market looks and feels just as it did when it opened, but everything around it has changed. Instead of drugs and despair, the Meatpacking District is now filled with the trendiest boutiques and the hottest restaurants and clubs.

From the timeless design by Jacques Garcia that features ancient artifacts to the inspired menu of Southeast Asian street food from Vongerichten, Spice Market is a whirlwind of Eastern exotica. We caught up with Suarez, the c.e.o. of Suarez Restaurant Group and a partner with Vongerichten and Culinary Concepts Hospitality Group, just before the February anniversary and chatted about how a century-old warehouse helped change a neighborhood and the dining scene around the world.

RH: What was your first impression of the building when you saw it?

Suarez: The magnitude of the space was intimidating. We’re talking 17,000 or 18,000 square feet for a restaurant. Jean-Georges and I kept things close to the vest. Our biggest at that point was Vong, I think, at maybe 5,000 square feet. The bones were there for this one, but the skin of the building was very difficult to work with. It was more than 100 years old, with hidden things all over, so it wasn’t easy. It was the toughest build-out ever, but a lot of fun.

Video: Take a look back at Spice Market; story continues below

RH: What made you think it could be a restaurant?

Suarez: It was a huge undertaking, but I liked the space. I opened Positano in 1980 on Park Avenue South, and at that time, there was not one restaurant in the area. We had great success. It wasn’t learning from a mistake, but learning to take a shot when I saw potential. That Union Square/Gramercy Park area is booming now with all sorts of restaurants and now the Meatpacking District is, too. So maybe it was being at the right place at the right time or maybe just not being scared. I’m a city boy—I always want to take a shot.

RH: Did you know right away the concept would feature Southeast Asian street food?

Suarez: I always leave that to Jean-Georges, my genius partner. I asked, “What can we work with here?” He had great success at Vong, and was always a lover of street food from Southeast Asia. He’s the first guy on any trip to China or Thailand to go out and taste the foods of the street.

RH: Did people think you were crazy opening this there?

Suarez: No, because people embrace Jean-Georges, and when he puts his mind to something, people know it will be a restaurant to enjoy. Jean-Georges is extremely prolific, he knows the pulse of the public and can put together a menu people will understand and enjoy. He’s always had a great passion for this food, and coupled with Jacque’s design, people knew this would work.

RH: Has the Spice Market changed through the years?

Suarez: From the day we opened to last week, I still feel like I’m in the same place. It’s been maintained perfectly and with great passion. The menu has been tweaked some, but nothing out of the ordinary. Jacques’ design, with 500- and 700-year-old artifacts, is timeless. You walk in and you’re still in a world of magic carpets.

RH: What has made it such a success?

Suarez: I think it’s the authenticity, from the menu to the design. And the fact the Meatpacking District took off beyond my wildest dreams: This was just slaughterhouses and women of the night 10 years ago. We liked to think this would happen, but gee whiz, it sure did happen. It still feels like opening day.

RH: When did you know you had something special?

Suarez: You really know in the first three weeks, from the buzz of the city and the first review in the New York Times. It was all word of mouth back then. When we were filling 18,000 square feet of restaurant and doing 1,000 covers right away, you’ve got to know something is there. You really do have a sense that early. It’s almost like Broadway: When a show opens strong it usually maintains that. In this case, we were sold out from day one and we’re still doing more than 1,000 covers a night and more on the weekends with brunch and dinner.

RH: There are now Spice Markets open in Atlanta, London and Qatar. How did you end up in Qatar and are more in the works?

Suarez: It wasn’t that we woke up and said let’s be in Qatar. Our relationship with Starwood Hotels afforded us that opportunity and there could be more, potentially. Qatar has been a huge success, but we’re doing a lot of other restaurants and don’t want to expand crazily. We crawled before walking and are now walking before running. We’re picking our spots. There is room for more, but right not it’s not really on our radar.

RH: Will there ever be another like this one?

Suarez: This was a very unique building. You’re not going to find that space in most cities. If you have 7,000 square feet, that’s a lot. This is a big, big box to duplicate, and I’m not sure if it will ever happen again.