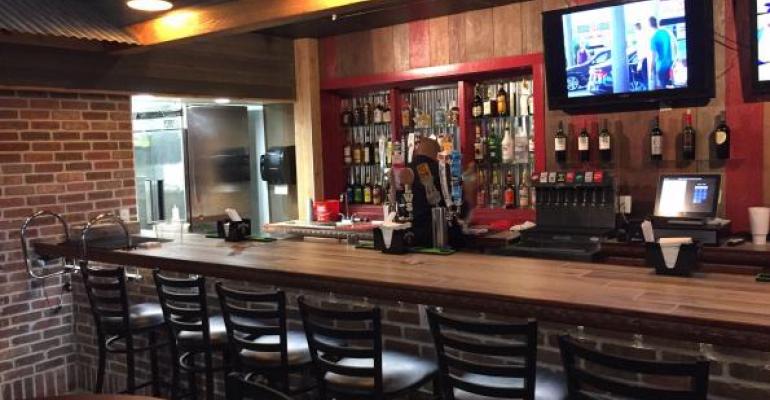 <pA fire damaged operation is renewed with help from a unique partnership. Sponsored by Frosty Acres.

Foodservice operators face many challenges, ranging from back of the house issues to customer concerns. Fortunately, though, they don’t usually face one with such near-tragic results as that experienced by Will Frost, owner of the Red River Steakhouse in Amarillo, Texas.

During the early morning of March 11, 2016, a fire broke out in the Amarillo restaurant, completely burning the dry storage room and leaving the rest of the building with heavy smoke damage. Frost only had a few hours to be dismayed, however. His distributor, Affiliated Food Service, was on the scene ready to help him rebuild.

The original Red River Steakhouse is located in McLean, Texas. Frost took over ownership of that restaurant in 2006. He had started working there as a busboy in 1998, when he was still in high school, and worked his way up through the business. The McLean operation was doing so well he decided to open a second unit in Amarillo. When the fire struck, the restaurant had only been open for a year.

That March night the fire alarm did not go off. In fact, the alarm was responsible for the fire. A section of the unit overheated and exploded, essentially frying the alarm. It also damaged the line of communications to the fire department so no one knew about the fire until someone driving by reported it.

Affiliated Food Service, also located in Amarillo, has been Frost’s distributor for 15 years. Doug Street, general manager of the foodservice, and his team responded to the emergency immediately.

It took the insurance company several months before it sent a check. This left Frost with a shortfall to pay for rebuilding since the unit was not bringing in any revenue. However, Affiliated responded to the challenge.

The distributor put a hold on the restaurant’s recent food bill, carrying it until the insurance check came in. This allowed Frost to begin cleanup and repairs. “Will has his wife, Jill, and a baby  boy, Walker,  to worry about,” Street says. “Think how scary it is when the insurance company drags their feet.” So Affiliated stepped up to the plate and offered its help. This was just the beginning.

Going back to the drawing board

Frost and his team took advantage of the opportunity to start over and revamped the design of the unit. Staying within the same footprint, they moved the bar and changed the wait station so the servers had quicker access to everything. The restaurant was redesigned and rebuilt to be more streamlined. The kitchen was outfitted with all new equipment.

Daniel Hamilton, an Affiliated district manager, worked with the Red River sales rep, Tony Clary, and Frost to revamp the menu. They went back to basics and evaluated every item, judging it on the basis of whether it had been working well from a customer-satisfaction and a speed-of-preparation standpoint. They conducted product cuttings, sampling everything from side dishes to the steaks that are the mainstay of Red River’s offerings.

Street says they ended up with a new 5-ounce, pre-cut tenderloin steak along with a 22-ounce T-bone. Affiliated helped Frost develop a sauce for his salmon dish. They added new spice mixtures and even changed the bread. “Will wasn’t happy with the bread that was served at the dinner table,” Street says. “It was time for a change.” In addition, staff had been hand-cutting fresh French fries. The Affiliated team was able to offer a frozen version that tastes like hand-cut fries, thereby saving labor.

Once the new products were set, a revised menu was needed. Affiliated has its own print shop where Street’s wife works. They designed a menu that fit the style of the concept and printed it free of charge. Now if Frost wants to change something, the menu can be reprinted easily.

Red River had a soft re-opening on Aug. 15. Word of mouth worked its magic and in a few days, as Frost recalls, “sales went through the roof.” He adds that the remodel and re-opening would not have been possible without the partnership with Affiliated. Working together they turned what could have been a tragedy into a success.

“We worked as a team to make it as good as we possibly could,” Frost says.

Affiliated managers were among the diners when the Red River re-opened. And one of the appetizers they could order was named in honor of Affiliated Food Service's general manager — Wild West Street Wings.

Owners: Affiliated Foods is a co-op owned by its retail member stores

Sponsored Content
How to drive success for your restaurant
Nov 01, 2022