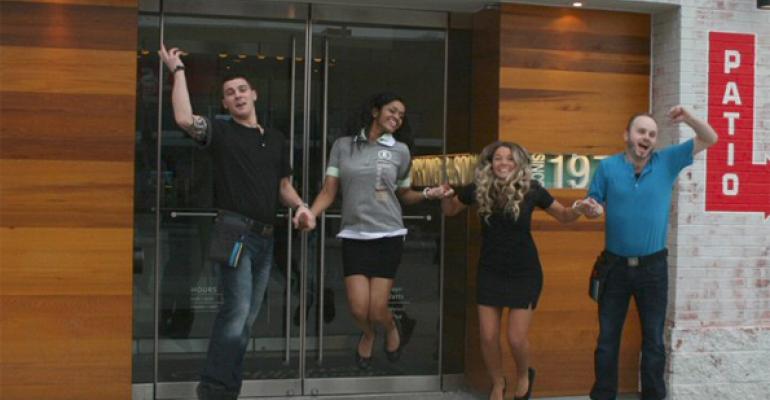 Normcore uniforms: It's hip to be square

At first, we weren’t sure the North American Association of Uniform Manufacturers & Distributors (NAUMD) had sent us the right picture to accompany the announcement of its 2014 Restaurant Image award. It showed what appeared to be four randomly dressed passersby goofing off outside the winning concept, Canadian pub chain Kelsey’s. But these were indeed on-duty Kelsey staffers, and their outfits may signal the arrival of the current “normcore” fashion trend on the restaurant uniform scene.

Newsweek defines normcore this way: “The idea: that the very latest trend is to be trendless. That cool, in fashion, is not caring and trying even less; wearing clothes for comfort and belonging, rather than style. Blank slate dressing. The joy of the ordinary.” In other words, hipsters now wear the same clothes they used to deride tourists for wearing or items similar to what their parents might buy at the mall. “Bland, suburban anti-fashion attire” is how the New York Times sums it up.

A key attribute of normcore clothing is that is comes with a uniform-like sameness built in. Hence it is readily adaptable for use by restaurant staffers.

NAUMD doesn’t use the word “normcore,” of course. It describes Kelsey’s uniforms as “prep/collegiate meets South Beach.” Kelsey’s director of marketing Anesie Johnson-Smith says the company wanted its uniform designer, Unisync Group, to provide fresh thinking on what the chain’s front-of-the-house staffers should wear to better reflect the chain’s rebranding strategy. Kelsey’s, which once had 140 locations, has recently downsized to 88 units and freshened up several aspects of its operations.

"Kelsey's was in need of a revolution of its identity. We wanted something that would differentiate our look and feel and allow our Krew members the opportunity to be themselves and have fun with their uniform. Unisync was right there with us, helping capture our brand vision and bringing it to life with a new look and improved versatility for our uniforms.”

Will customers notice the new look? A recent survey sponsored by Cincinnati-based uniform supplier Cintas Corp. found that 65 percent of U.S. adults say seeing uniformed employees has a positive impact on their perception of a company.

This online survey was conducted in January 2014 by Harris Interactive on behalf of Cintas. Respondents said that uniformed employees also had these effects on their perception of a business:

If you’d like to start outfitting your restaurant’s front-of-the-house staff in uniforms or change the ones they already wear, it looks like a good time to do it. The arrival of normcore means that it may have never been cheaper or easier to purchase on-trend uniforms than it is right now. Fashion trends change quickly; let’s hope normcore lasts longer than most.

Market Your Restaurant with Uniforms
Dec 01, 2006