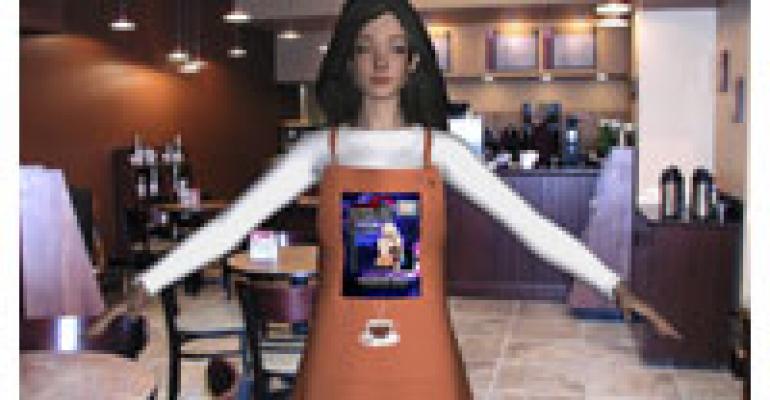 We don’t know if the development of media garment technology will result in incremental revenue for restaurants that deploy it. But we have to admit that if you’re a fan of in-your-face marketing, interactive uniforms worn by service personnel are the final frontier. But will your employees want to become walking kiosks?

This high-tech apparel is a result of a collaboration between media outfit Eyelevel Interactive and uniform maker Superior Uniform Group. Eyelevel supplies the digital components, while Superior created clothing that accommodate these technologies. The idea is that servers wear uniforms whose ads offer deals, which customers purchase by tagging the ad’s QR (Quick Response) codes with their smartphones. Restaurants are a key target of the venture, as are big box stores, home centers and other retail industries.

This seems like an unbeatable marketing combination. Operators can send a walking and talking spokesperson wearing an interactive display ad right to the customer’s table, with any purchase consummated automatically in the blink of an eye. We can’t think of a better way to stimulate impulse buying than this.

Eyelevel Interactive’s iPOPS (Interactive Point of Purchase System) taps several proprietary technologies that makes this work. It provides, says the company, “the revolutionary concept of interchangeable panels that include advertising and promotions directly applied to the front and/or back of employee uniforms. iPOPS creates a paradigm shift that converts uniform expenses into revenue-generating profit centers and in the process creates a new metric by which advertising is measured.” Uniforms a profit center instead of a cost? Many operators will find that proposition attractive.

One key to iPOPS is the EI Tag, a geometric, multicolored, two-dimensional specific matrix barcode, which holds data that becomes accessible when scanned by a wireless mobile device. The result: trackable in-store promotions, featuring “Use It Or Lose It” coupons customers can redeem instantly via their smartphones. The system can also be used to bolster customer loyalty and employee incentive programs. Feedback to management, of course, is immediate.

Superior’s role was to come up with uniforms that enable ordinary work attire to be transformed into wearable interactive media. The company came up with a grip-it-and-rip-it system that works like this:

“Product promotions or advertising are placed on sublimated point of purchase panels called Switch-Its, on either side of the employee’s garment. The panels come in a number of shapes and sizes and may be customized depending on the type of apparel or placement on the garment. Switch-It panels are customized with a marketing campaign and arrive ready to be applied to the garment. Panels are easy to apply and remove, allowing businesses to run multiple campaigns simultaneously for any duration of time.”

In theory, this looks like an unbeatable way to target your advertising dollars to the ultimate niche market: people already in your restaurant. In practice, however, we have to wonder about what caliber of server would be willing to wear these garish outfits (see photos) and play the walking billboard role.

Still, an investment in interactive media garments may turn out to be a better use of a restaurant’s advertising and marketing dollars than Groupon, the current go-to choice for many operators. The final obstacle to their success, however may be the tone of nonstop commerce and promotion these uniforms bring to a dining room. Will they seem intrusive to deal-weary customers who just want to enjoy their meal?