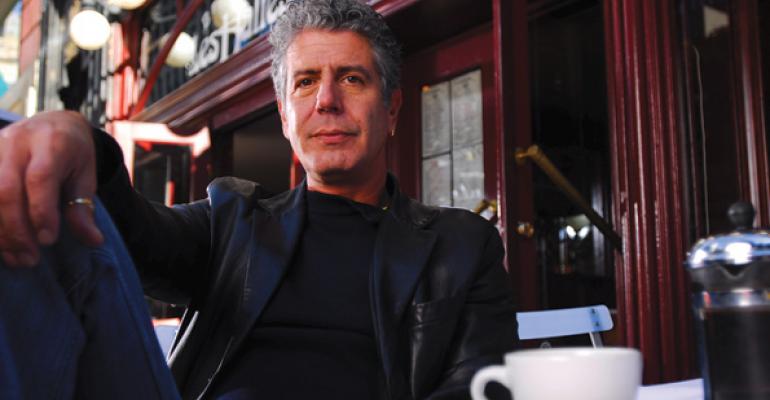 Chefs have been very vocal about seafood sources in the last week.

Anthony Bourdain is coming to the defense of Inuit fisherman by asking chefs to reconsider their boycott of Canadian seafood.

Bourdain opposes a recent pledge, endorsed by chefs from Stephanie Izard to Scott Conant, Michael Symon and Paul Virant, to avoid Canadian seafood as a protest over the country’s commercial seal slaughter.

Some 42 chefs joined the Humane Society of the United States in supporting the Protect Seals campaign. All agreed to stop purchasing seafood until the slaughter ends.

Bourdain, who visited with the fishermen and ate raw seal meat during an episode of his "No Reservations" show, took to Twitter to defend the practice.

“I’m all for protecting seals, but a total ban dooms the indigenous people above arctic circle to death or relocation,” he tweeted, among other things, arguing that seal hunts and consumption are part of the native culture.

“I completely understand well meaning intentions of good hearted chefs who signed this petition. But they are wrong,” he tweeted.

Meanwhile, more than 450 chefs, restaurant owners and culinary leaders have signed a letter asking Congress to pass the Safety and Fraud Enforcement for Seafood (SAFE Seafood) Act. The act, introduced in March 2013, would help stem fraud by requiring full chain traceability for all seafood sold in the U.S.

"We should be able to tell our customers, without question, what they are eating as well as where, when and how it was caught," the letter says.

"Chefs and restaurant owners want to know the seafood they serve is safe, legally caught and honestly labeled," observes Jacqueline Savitz. She is a v.p. with Oceana, the organization behind a campaign to stop seafood fraud. Oceana recently found that one-third of the samples it collected nationally were mislabeled.