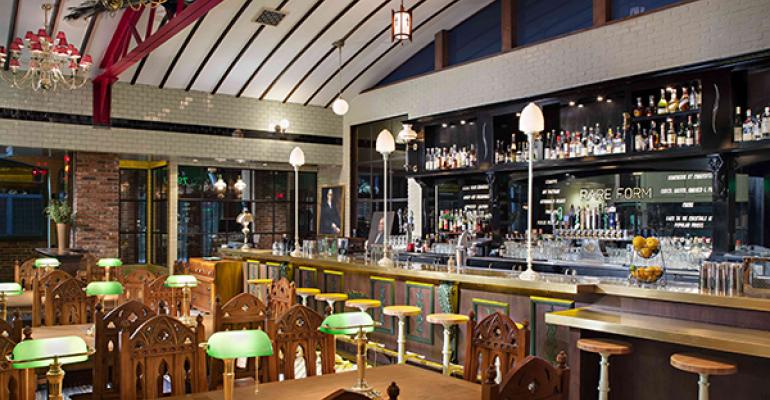 CH Projects, one of Restaurant Hospitality’s 2014 Top 25 multi-concept operators, operates a mix of restaurants in San Diego that are designed as to foster social interaction, including the latest, Rare Form, described as a contemporary Jewish deli.

A focal point at the deli, and no doubt an icebreaker, is a bar dedicated to Schnaps. Yes, Schnaps. Not to be confused with the lower-case schnapps, the stuff some football fans down to keep from freezing in the bleachers.

The German Schnaps differs from American schnapps: Schnaps is a combination of distilled mashed fruit and water, a colorless liquid with a high alcohol content and a subtle taste; schnapps, on the other hand, is often heavily sweetened and flavored, and generally considered a liqueur.

Anthony Schmidt, who partnered with CH Projects on Rare Form, has spent two years developing the bar program designed to showcase Schnaps, eau de vie and other brandies. The menu will include nine Schnaps cocktails, 12 draft beers, a selection of wines and three Schnaps boilermaker pairings.

Schnaps has been stigmatized in the U.S., Schmidt says, because the product here is so removed from the original. How did that happen?

“It’s a lot easier to user artificial flavoring than to use real fruit to make a distilled spirit,” he says, “and it has evolved into this sickeningly sweet, not-so-wholesome ingredient.”

On the other hand, he says, the good stuff can be amazing.

“It’s a really beautiful process, conserving fruit from the season at peak of ripeness, when it’s just about to ferment. Instead of wasting it they turn it into a really nice product that can be used at any time.”

Schnaps can be made with virtually any fruit, but the most common are high-sugar, high-water-yielding varieties such as cherries, pears, apples, peaches and apricots.

Of the 100-odd bottles on Rare Form’s bar, many are imported, but U.S. producers are getting more serious about Schnaps, too, but they face a learning curve with consumers. One Northern California distillery that supplies Rare Form was marketing Schnaps as eau de vie, possibly to avoid that image issue, and “changed the name to brandy so people would get it,” Schmidt says.

As the base for a drink, Schnaps “is cocktail magic,” Schmidt notes. “It’s so easy to use in drinks, it’s unbelievable. The only disadvantage is it tends to be more expensive than the standard base spirit.” Plenty of historic cocktail recipes combine apple brandy and whiskey, or apple brandy and cognac, for instance, but he is also using Schnaps to update some classic cocktails.

Rare Form's Basil G&T, for example, is a mix of basil eau de vie, dry gin and bitter tonic, described as “our worthwhile take on the standard issue. Herbaceous, different and quick to satisfy.” Reinventing standards accomplishes two things: Since they are familiar, they are more approachable. At the same time, they “become that much more interesting,” Schmidt observes.

“All of a sudden my guest is saying, ‘these guys are thinking a little outside the box.’”