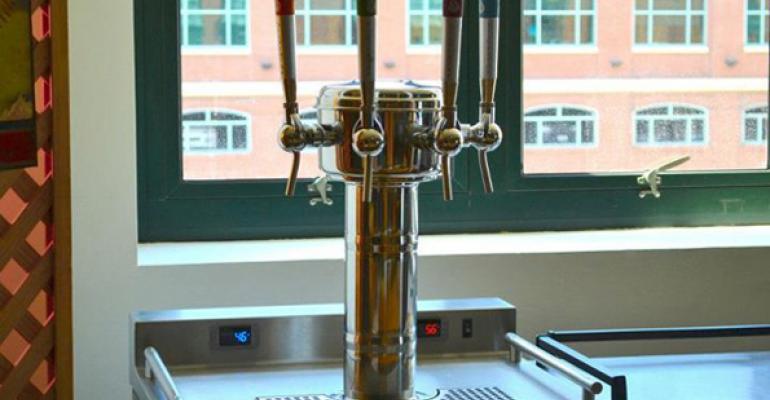 On tap: more profit from wine

Affordable kegged wines can boost your alcoholic beverage revenue in a hurry.

It may be a little late for your restaurant to get the full benefit of craft beer-on-tap craze and a little early to go all-in on the emerging kegged cocktail trend. But wine-on-tap looks like a beverage option whose time has come, thanks to an ever-widening consumer preference to order wine by the glass rather than by the bottle.

No doubt the craft beer movement is still going strong and looks to be getting even stronger. Why else would casual restaurant giant Darden pay $585 million cash for beer-centric Yard House? That’s $15 million for each of the chain’s 39 existing stores that have, on average, a staggering 130 beer taps.

Darden executives think they can grow Yard House to 200 units, an indicator that there’s still plenty of money to be made in the multitap pub segment of the industry. So it’s probably smart to have plenty of craft beers on tap at your operation. Just keep in mind that having, say, a dozen or so beers on tap might not be the point of competitive distinction it once was.

In contrast, very few restaurants offer kegged cocktails. That’s true even though those that offer them say kegged cocktails make a ton of money and provide needed efficiency during busy times.

Here’s what mixologist Matt Seiter of Sancturia in St. Louis told the audience during the kegged cocktail panel at Tales of the Cocktail in New Orleans last month. “It’s absolutely the biggest time-saver, biggest moneymaker you can possibly imagine in this industry,” Seiter said. “I make more money on booze than I do on beer. Your margins on booze are obviously better.”

It’s still early in the kegged cocktail game. That may be because while kegged beers are something operators can simply buy from a distributors, kegged cocktails are DIY affairs. A restaurant’s mixology team must craft the drinks in-house.

Kegged wines are also something operators buy from distributors. The selection is getting better, now that an ever-increasing number of winemakers make wines specifically suited to kegs. Unlike bottled wines, blended to improve with age, kegged wines must be ready to drink when they go into the keg.

The economics behind keg wine are favorable at both the vintner and restaurant level. But the primary reason to offer them can be found in the results of a survey conducted by wine dispensing system maker Napa Technology.  The company quizzed more than 150 top sommeliers, wine directors and hotel and restaurant operators, finding that wine-by-the-glass consumption is on the rise. More importantly, consumers are willing to pay more for the experience of tasting a wine by the glass that would otherwise be cost-prohibitive by the bottle.

Which is to say, guests who wouldn’t spring for a full bottle of wine will purchase some if it’s available by the glass. Kegged wines are one way to make your house wine program seem sexier to the wine-by-the-glass portion of your customer base.

Restaurants can have wine-by-the-glass programs using bottles, of course, but the kegged wine method offers operational and economic benefits that bottles don’t. The big one is that operators can buy good wines in bulk at significant savings over bottled. That wine can be then sold for slightly less should the operator want to pass along some of the savings to the consumer. There are now multiple purveyors of tap systems and wines meant to flow through them to pick from, so operators have plenty of choices.

To illustrate some of the numbers here, we’ll look at an example from disposable keg purveyor Unokeg Singlo. The company’s kegs come filed with one of three Italian wines: Prosecco, Pinot Grigio and a Merlot-Cabernet blend.

Cutting-edge beverage consultants like NYC-based Tippling Bros. now put kegged wine on tap into their clients’ bars. That’s  what they did at Chicago’s Tavernita. If you’re looking for an on-trend way to boost your beverage program’s bottom line, kegged wine on tap may be the easiest way to do it. Your customers are ready if you are.