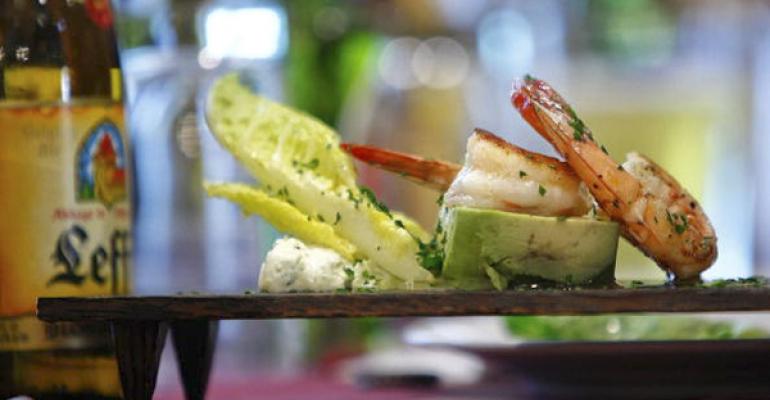 Brewmasters, mixologists and winemakers are collaborating with chefs on a new generation of approachable and fun beverage and food pairings for restaurants and bars.

Hallmarks of the new movement are the greater use of local, seasonal and savory ingredients as flavorings and an influx of beverage professionals with culinary training. In addition, for at least one brewer, craft beers are being given more transparent, less fanciful names, to help on-premise staff as well as consumers recognize their flavors and pair them better with food.

That, in a pint glass, is the gist of “The Art of Beverage and Food Pairings,” an educational session at the International Wine Spirits and Beer Event during the recent National Restaurant Association Restaurant, Hotel-Motel Show. It was spearheaded by two accomplished food and beverage pros: Jared Rouben, brewmaster of Moody Tongue Brewing Company, a new Chicago brewery that is fermenting its first brews; and Kevin Hickey, executive chef and partner of Bottlefork, a new Chicago restaurant with a penchant for teaming up with Midwest food and beverage producers.

Hickey told the audience that the session was not about traditional rules of pairing, such as red with game, but more about the benefits of a culinary approach.

“Our mixologist at Bottlefork went to culinary school, cooked for a while and then went behind the bar,” said Hickey. “What those guys bring to the table as a mixologist, a brewmaster or even a winemaker is a sensitivity to palate that a lot of other people don’t have; a balance that you don’t see a lot.”

Rouben credited his training at the Culinary Institute of America and experience at restaurants like Per Se in New York City, combined with a brewing diploma from Siebel Institute in Chicago, with laying the foundation for his “culinary brewing” style. It was furthered by brewing projects in tandem with Chicago chefs. One of his brews that benefited from chefly influence was Pluot Pale Ale, made with local pluots.

Traditionally, a brewer might have ordered a fruit extract from a brewer’s catalog to make a beer like that, Rouben said. However, partly due to the example of chefs like Hickey, he sourced fresh, local fruit.

“By using a lot of these techniques and applying culinary brewing, I not only made better beers, but I started pairing my beers better with food,” said Rouben.

Both panelists noted the positive impact the rising numbers of on-premise pros with culinary training are having on beverage in general and pairing in particular. More are making their own flavored liqueurs and bitters, for instance.

Rouben advised naming craft beers with clear, descriptive language rather than colorful, fantasy names for clearer understanding of flavors and better food pairing. For example, one of Moody Tongue’s first beers will be dubbed Cold Pressed Paw Paw Belgian Golden Ale. Cold pressed refers to the juicing technique, paw paw is an indigenous fruit of the Midwest and a key flavoring and golden ale is the style.

“It’s important for people to know what they are purchasing,” Rouben said. “I think transparency is important in a booming industry.”