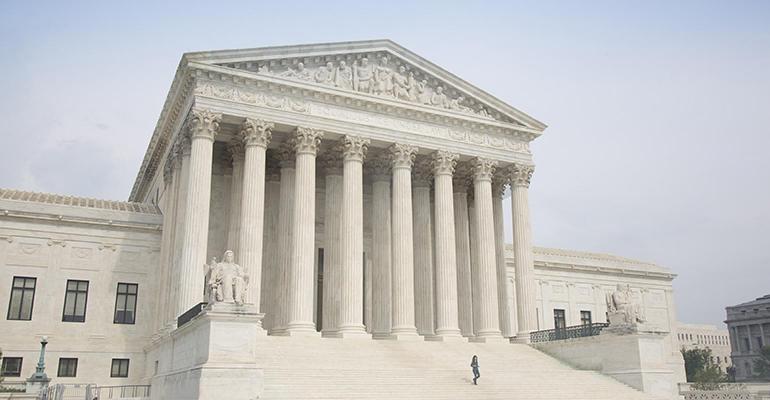 The vaccine mandate for workplaces covered under OSHA with more than 100 employees will not go into effect, while the mandate for certain healthcare workers will

The U.S. Supreme Court blocked President Biden’s requirement for employers with more than 100 workers to provide proof of vaccination or get tested regularly under the Occupational Safety and Health Administration on Thursday, overturning a previous lower court decision that allowed the mandate to go into effect in January. The mandate will still go into effect for select healthcare workers, however.

In the 6-3 decision, the majority opinion concluded that the federal agency overstepped its authority in establishing and enforcing the wide-sweeping rule that would affect a variety of industries (and only those that happened to have more than 100 employees):

"Although Congress has indisputably given OSHA the power to regulate occupational dangers, it has not given that agency the power to regulate public health more broadly,” the ruling said. “Requiring the vaccination of 84 million Americans, selected simply because they work for employers with more than 100 employees, certainly falls in the latter category.”

The three dissenting liberal judges on the bench argued that it was within the public’s best interest for the president to enact such a mandate in times of emergency.

Related: Here’s what operators should know about the final OSHA ETS rule on vaccine mandates

“The ETS falls within the core of the agency’s mission: to ‘protect employees’ from ‘grave danger’ that comes from ‘new hazards or exposure to harmful agents,’ the dissenting opinion read. “In our view, the court’s order seriously misapplies the applicable legal standards. And in so doing, it stymies the federal government’s ability to counter the unparalleled threat that COVID–19 poses to our nation’s workers.”

President Biden initially announced the Emergency Temporary Standard requiring all workplaces with 100 or more employees covered under OSHA to get vaccinated or show negative weekly COVID-19 tests in September. The final rule on this legal requirement — which would affect 80 million people — was published in November.

After the requirement was challenged in court by multiple states that had put laws in place banning vaccine mandates and passports, including Texas, the U.S. Court of Appeals for the Fifth Circuit in New Orleans granted a motion on Nov. 12, ordering OSHA to “take no steps to implement or enforce the ETS.” However, in December, the U.S. Sixth Circuit Court of Appeals lifted the temporary stay on the requirement.

The Supreme Court ruling on Thursday effectively overturned the December Court of Appeals decision just as the requirement had begun to go into effect this week. According to attorney Alden Parker, co-chair of Fisher Phillips’ hospitality practice, this is likely “close to the end” for any federal vaccination mandate that might come out of this pandemic.

“The debate doesn’t necessarily end with OSHA’s rule being stayed; all of the states will be watched to see if and when they implement state plans of their own,” he said. “There will be a battle on the local level: Austin and Houston might have completely different requirements within the same state. It will make it very difficult for companies that do businesses in multiple states when everyone has different rules.”

David Miller, a labor attorney from Bryant Miller Olive P.A. warned that employers should be wary of the stay even though Biden’s law was overturned because it will come down to enforcement on a local level.

“Some states have laws that prohibit or limit employers from some or all of the requirements of OSHA’s ETS,” Miller said.