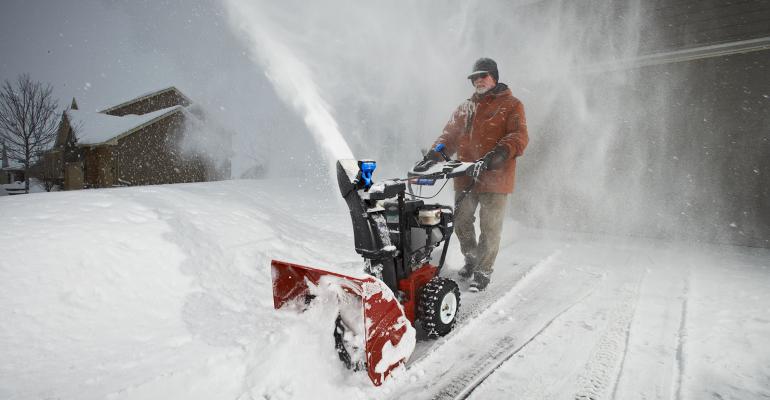 Restaurant customers not thrilled by the 2014 chill

The winter of 2013-2014 has been so bad for so long that researchers from NCR and Technomic have had time to conduct studies that show just how tough it’s been on restaurant operators. Now they’re releasing their findings, even as late winter storms Titan and Vulcan pummel the U.S. with yet another round of snow and cold.

If you’re wondering where the customers were this winter, it appears they had trouble getting out of the house. A study conducted by Duluth, GA-based global transaction firm NCR found that 46 percent of U.S. adults have canceled or rescheduled entertainment plans over the past three months. While movies, sporting events, concerts and shows all took a hit, restaurants were the biggest loser. Forty-three percent of respondents told NCR that bad weather had an impact on their dining plans this winter, with fully one-third of U.S. consumers reporting they had cancelled or rescheduled dining plans during the last three months.

This strategy worked for at least one restaurant group.

“Even though a number of our restaurant locations are in highly trafficked areas like Times Square, we’ve seen a slight drop in the number of customers coming through our doors due to the winter weather” says Jeffrey Bank, c.e.o. of New York City-based Alicart Restaurant Group. “But with the right systems in place, we’ve been able to boost sales by offering promotions tailored to our customers’ personal preferences.”

Other key findings from the NCR survey:

• Unsurprisingly, during bad weather, 62 percent of Americans are more likely to order in than go out to a restaurant.

• Many Americans are turning to mobile devices to identify take out/delivery options during bad weather, with nearly a third (32 percent) having used mobile technology for this purpose, a percentage which increases to 52 percent for individuals between the ages of 18-34 as compared to 12 percent of those aged 65+.

Foodservice market experts Technomic put winter 2014 under the microscope, too. Its study also concludes that this past winter has had—and of this writing, is still having—a strong negative impact on the restaurant business. In particular, roughly half of operators on the East Coast—53 percent of operators in New England and 49 percent of those in the mid-Atlantic states—said this winter’s storms hurt business.

In what way? Customers didn’t want to brave the storms. In Technomic’s consumer survey, 60 percent of U.S. consumers said the bad weather impacted their activities and lifestyle. In particular, those living in areas that got the worst of the storms were most affected. Eighty-two percent of Northeast survey respondents and 76 percent of mid-Atlantic residents said the weather controlled their agenda much of the time this winter.

"Consumers across two-thirds of the country have been reluctant or unable to leave their homes for the better part of two months," says Technomic’s Wade Hanson. "We expect that consumers will enthusiastically return to foodservice in the spring, but January and February have to be considered lost dining occasions for foodservice operators.?Hanson doesn’t see restaurant activity turning around very soon.

"What is particularly troublesome is that the snow, cold, and ice are continuing into March," he explains. "The longer the weather patterns continue, the more consumers will be confined to their homes and subjected to higher heating bills and unexpected weather-related expenditures. Plus, the impact of higher heating bills may be felt into April or May."

So what’s the outlook for restaurant sales and growth now? Technomic puts a number on what this winter has cost operators so far.

“Ultimately, the harsh weather conditions translate into foodservice sales being down three to four percent nationally and down seven to eight percent in weather-affected markets in January and February.  As a consequence, full year industry projections suggest growth will be +2.5 to 3.0 percent versus an initially expected +3.5 to 4.0 percent.”

If it’s your job to justify your operation’s first-quarter 2014 results to your restaurant’s owners, its investors or the bankers who hold its loans, keep the results of these two studies mind. And let’s hope some great spring and summer weather will cause customers to start spending money at restaurants again.