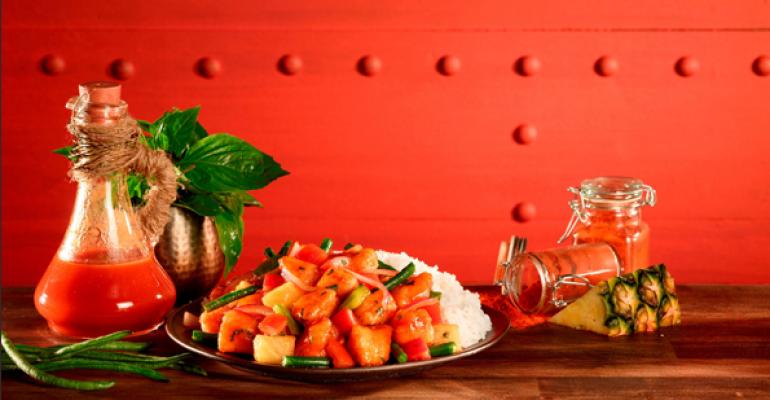 Boulder, CO-based ad agency/food brand consultancy Sterling-Rice Group took a thorough approach to developing its list of 2013’s top food trends. First, it queried celebrity chefs, product developers and other food world luminaries about what they saw on the horizon. Then the agency’s in-house culinary team drew on those findings to compile its list.

Here are the 10 dining trends Sterling-Rice Group (SRG) thinks will move from the cutting edge into the mainstream in the year ahead.

1. Sour gets its day. The American dining scene will explore additional parts of the flavor spectrum beyond sweet, salty and fatty, says SRG. “Next year we’ll have a plethora of tart, acidic and bitter flavors to choose from as menus feature flavors like fermented cherry juice, varietal vinegars, even sour beer.”

2. Chefs watch your weight. Healthful dining is a perennial entrant on most trend lists, but will we actually see healthful dining manifest itself on menus this year? “Butter, bacon, and cream have been chefs’ best friends since the beginning of time,” notes SRG. “But in 2013, chefs will be working quietly behind the scenes to make your dishes better for you with ingredients like brown rice, high-fiber grains and vitamin-rich veggie broths.”

3. Asian infiltrates American comfort food. The spicy and fresh flavors of Thailand, Vietnam and Korea take comfort food in a new direction, and this could be the year more restaurant operators position these cuisines as such. “Expect to walk into a classic American diner and see options like Vietnamese chicken sandwiches, Sriracha mayo and Korean-glazed pork ribs.”

4. Veggies take over the plate. No longer prepared as just a side or salad, vegetables will get their chance to star as the main dish this year. SRG points to entrees like the Kohlrabi Bourguignon at AQ in San Francisco and the Cauliflower T-bone at Superba Snack Bar in L.A. We know restaurant owners will love the food cost on items like these.

5. Kids’ menus grow up. One of these years, a forecast like SRG’s—that mac and cheese and chicken nuggets will take a backseat to kid-friendly versions of adult dining options—is bound to come true. Is 2013 that year?

6. American artisans save you a trip to Europe. “For years, budding food artisans have sprung up in the U.S., crafting everything from booze to charcuterie,” SRG declares. “And as their craze becomes a lifestyle, you can count on every major city to proudly sport local, artisan foodie destinations in 2013.”

7. Small plates for me only. Have customers had enough of pass-it-around dining? SRG tells us small plates meant for sharing will be replaced with smaller, singular servings of meat, veggies or starches for a truly customized dining experience.

9. No diner left behind. From gluten-free to vegan, more and more restaurants will offer all-inclusive menus and services to accommodate all eaters. “Gone are the days when chefs can ignore dietary requests. They are just too pervasive,” says SRG associate culinary director Kazia Jankowski. “Chefs who are cutting edge realize this and are planning ahead in the kitchen to have the flexibility to meet the varied requests.”

10. Popcorn is the snack of 2013. Sweet or savory, the all-time favorite (and healthy) snack will pop up everywhere—in ice cream, as croutons, as a bar snack and more. SRG points to examples from restaurants such as Linger in Denver, which serves complimentary popcorn with seasonings like Oaxacan Mole and Madras Curry and Dill instead of a bread basket; and Halcyon in Charlotte, NC, which offers salted caramel popcorn croutons atop a North Carolina winter greens salad served with boiled peanut vinaigrette. From a food cost perspective, what restaurant wouldn’t want to jump all over this one?

We don’t know how many of these trends will make the leap into the mainstream this year. But we’ve already seen a couple of them gain a foothold on a number of restaurant menus, and we wouldn’t be surprised if a few more don’t make their presence felt in 2013.