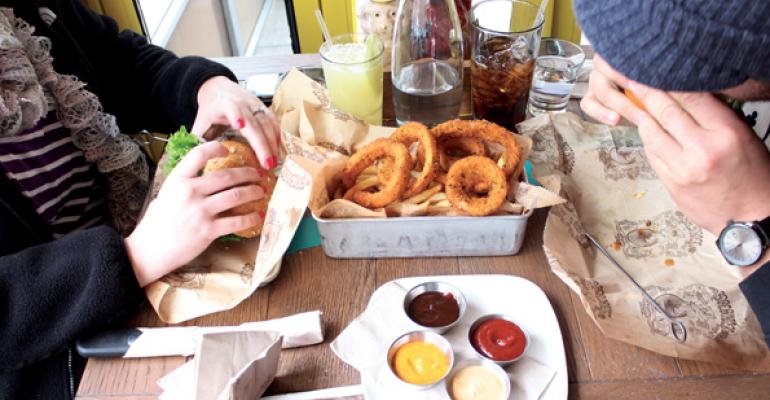 Restaurant guests not ready to pay extra for that ketchup

Right now many restaurant owners might be thinking about adopting the airline a la carte pricing model—deconstructing the price of dishes to squeeze out more profits as a way to compensate for rising food costs. Before taking that step, they might consider a new study of attitudes toward upcharges for condiments.

Overwhelmingly consumers reject the idea of paying a small additional fee, even a quarter, for condiments to go with their meals, according to a recent NPD Group survey. Over 80 percent of the consumers surveyed said “no way” to charges for condiments, which are typically included free with a meal ordered at a restaurant.

Of the small minority (about one in six) who said they would pay something additional for condiments, more than half said they would pay 25 cents. That’s the amount some New York McDonald’s units started levying a year ago for extra ketchup. Taking that a step further, one small but trendy burger chain, NYC-based Bareburger, adds 55 cents to the tab for what it calls "bare dips," an optional assortment that includes additions such as habanero chipotle mayo, whole grain maple horseradish mustard, curry ketchup and thai chili mayo.

Clearly we're talking a cut above squeeze packets of ketchup and yellow mustard, and the 55-cent premium might give those dips some cachet.

But is the extra income worth it? NPD notes, not surprisingly, that charging for condiments yields some negative fallout. About half of the consumers surveyed apparently resent the principle behind upcharges for condiments and vow to patronize another restaurant rather than pay. Others said they would find ways to avoid the charge by ordering items that didn’t require condiments. Only about a fourth said they would begrudgingly accept the added fee.

This isn’t the first time a tactic perceived by many as gauging has drawn wide criticism. Consider:

• Many consumers might be opposed to bottled water, but they also seem to resent paying for filtered tap water served at the table from a reusable bottle.

• Asian restaurants that charge for rice, even if it’s $1 for high-quality basmati, for example, routinely get dinged in reviews for the practice.

• Discussions over whether to charge for bread service can stir up some strong emotions. A simple Yelp search turns up plenty of vitriol for owners like Tom Douglas, who charges extra for bread at his Seattle restaurants, and Jody Adams' Rialto in Boston, where the bread comes with a price.

The New York Times’ restaurant critic Pete Wells recently posted a wry commentary on the all-but-forgotten practice of providing bread and water at the beginning of a meal.

“It sounds like something out of a John O’Hara story now,” Wells writes, “but not very long ago, when we sat down in a restaurant, waiters would fill every glass with ice water and set a basket of rolls or sliced baguettes on the table. We didn’t have to ask for it or pay for it. Bread and water simply ... appeared.”