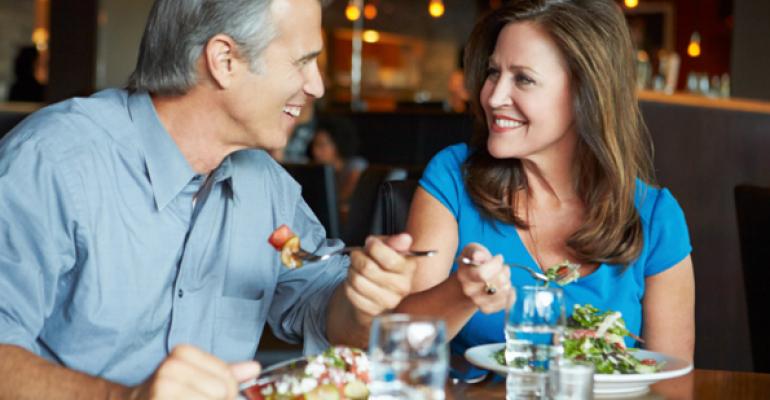 Reports: Boom times back for restaurants

Restaurant operators, it looks like your long wait is over. The latest figures released by the U.S. Department of Commerce show that spending on restaurant meals is increasing at a rate last seen in 2006. Same-store sales numbers collected by respected industry watchers tell the same story: good times aren’t just around the corner; they’re already here.

But the weather made February’s results an anomaly. Prior to that, the news had been remarkably good.

“Spending at restaurants as measured by the Commerce Department’s retail report show that annualized sales soared a seasonally adjusted 13.7 percent from September 2014 to January 2015,” Marketwatch reports. “That’s the strongest five-month stretch since December 2006, and a level only exceeded in the past 25 years in mid-1994 and late 1992.”

A separate and slightly different Commerce Department survey, which tracks personal spending, tells the same story. Its results show that consumers increased spending at U.S restaurants by 9.5 percent during this same five-month period. The last time spending rose this fast? It was also in 2006, when the soon-to-burst housing bubble was still turbocharging consumer spending.

Data-driven companies that keep a close eye on the restaurant industry see sales momentum building, too. The February 2015 Restaurant Industry Snapshot compiled by TDn2K’s Black Box Intelligence arm found a similar trend at work.  It gathers data from a client base whose 110 brands and 20,000 units encompass the full spectrum of the restaurant world.

TDn2K’s February 2015 numbers show an overall increase of 2.1 percent in restaurant sales, 3.8 percent when expressed on a rolling three-month basis. Traffic was down one percent, but still up 0.7 percent over the past three months.

Bad-weather-stricken New England had the worst results (February sales down 5.8 percent, traffic down 8.9 percent). Restaurants in the Western region, where sales were up 5.1 percent and traffic rose 1.2 percent, did the best.

“February might have been the worst month on record weather-wise for many regions of the country, but for restaurants, the results were far from dreadful as the industry was able to post its eighth consecutive month of positive same-store sales growth,” says TDn2K’s Victor Fernandez, “With these latest results, Q1 of 2015 is firmly positioned to become the third consecutive quarter in which the industry has achieved positive growth in comparable stores; the first time in over two years.”

“According to NPD’s SalesTrack Weekly, which tracks 60-plus chains that account for 40 percent of all chain outlets in the U.S. and 15 percent of all consumer spending, same store sales in the U.S. restaurant industry were up 3.5 percent in December and January and then 2.5 percent in February, capping off 12 straight months of growth,” says NPD global senior v.p. for foodservice Bob O’Brien.

These three respected sources came up with different numbers, but reached the same conclusion. After years of treading water, the restaurant industry is poised for growth. Get ready to make the most of it.