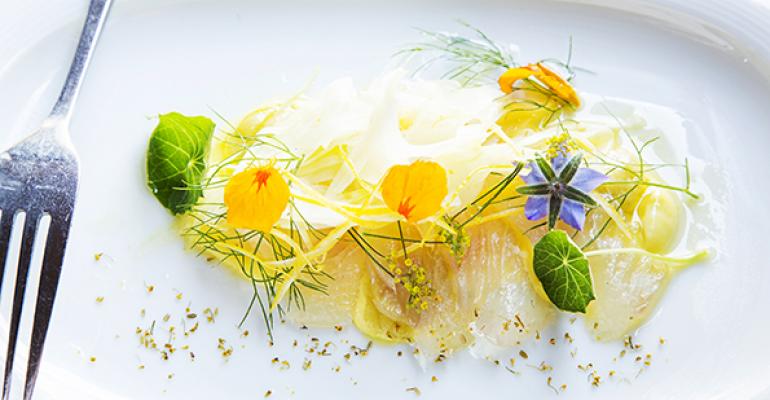 <p>Win over foodies with creative, beautifully composed and Instagram-able items such as this Fluke Crudo from Garrison, Washington DC.</p>
Trends>Consumer Trends

Only independents have foodies figured out

Congratulations to the restaurants named to the 2015 edition of OpenTable’s 100 Best Restaurants for Foodies in America list. They’re able to attract free-spending patrons who share their dining experiences far and wide via social media. (But if your place didn’t make the list, you can find out how to boost its appeal to this crucial customer segment by analyzing the results of global marketing agency Sopexa’s just-released 2015 Foodie Study.)

Creation of the list is a data-driven process. OpenTable users can designate a restaurant as “fit for foodies” each time they review a restaurant on the service’s site. OpenTable says it tabulates data drawn from more than five million restaurant reviews to compose its list.

Boundary-breaking, chef-driven independents seem do well in these ratings. No chain restaurants received a mention.

“This year’s honorees are where the culinary magic happens, where the rules of fine dining are being rewritten,” says Caroline Potter, OpenTable’s chief dining officer. "Whether they're reviving forgotten cooking techniques, championing the latest sustainable ingredient or creating unexpectedly delicious and unique flavor pairings, these restaurants are where you can truly wow the foodies in your life.”

Market researchers have a tough time pinning down exactly who foodies are and what they’re looking for in a dining experience. But Sopexa has taken a crack at it. The Paris-based agency’s study queried self-defined foodies from six different nations via an online survey answered by 3,000 to 4,000 respondents per country. Results, including those for the U.S., were reported out by individual countries.

Overall, the 2015 Foodie Study found that foodies are less interested in restaurants than might be presumed. They’ve moved on to cooking for themselves instead.

“Foodies are no longer food enthusiasts who only know about hot spots. Through our research and analysis, we are seeing that they are more independent, connected and experimental than ever, leveraging their savviness to find, own and display new products, flavors and cuisines to their online networks,” says Pauline Oudin, managing director and digital lead, Sopexa USA. “Empowered by technology, they have become house chefs, elevating every day gourmet cooking, with whom brands can engage across the entire purchase funnel.”

“While the pursuit of great taste remains top of mind for all foodies, they are becoming more demanding and selective, and would rather experiment on their own instead of going to the restaurant,” Oudin adds.

No matter what or where they eat, foodies can’t wait to share their findings online. “Foodies are democratizing gastronomy through their extensive use of social media, which they employ more than seven times a day to quench their thirst for inspiration and admiration,” the report found. “For seeking ideas and displaying their creativity, foodies unanimously use Facebook (90 percent) and Instagram (73 percent), followed by Pinterest (36 percent) and Twitter (19 percent).”

The younger the customer, the more likely he or she is to share an image of a dish or meal online. The study found that nearly three-quarters of respondents ages 30 or younger do so, much more than people 30 to 39 (53 percent do) and 40 to 49 (52 percent.)

The bottom line for restaurant operators in this study is, alas, a little vague. “Restaurants can increase loyalty by making the eating out experience exclusive, inspiring and sharable so the foodie is inclined to recommend your brand,” says Benjamin Bourinat, director of public relations and social media for Sopexa USA. Whatever that means in the context of your restaurant, do it right and maybe you’ll land on OpenTable’s list of top foodie restaurants next year.